Restokitch is a recipe sharing app and foodie social network that offers a primarily Indian menu and some ambitious features.

Restokitch is a recipe app that does a bit more than just offer some interesting and simple dishes. It also markets itself as a sort of social network for aspiring foodies and professional chefs, sort of like an Instagram or Twitter for cooks only. Features like followers and a hotline for answering user questions make this app stand out from other such recipe apps on Google Play. 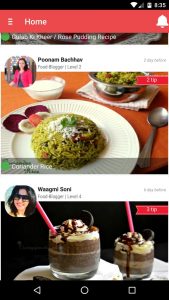 Restokitch primarily focuses on Indian cuisine, but there are some Western dishes mixed in as well.

Most of the recipes are fairly simple to prepare and feature readily available ingredients that you can find at your local supermarket. However, some recipes can stretch a bit long for a smartphone screen, so you may have to scroll down to read more, not ideal when cooking and your hands are full of food, I would have liked to see a better format for small screen reading to avoid this issue.

The social features of Restokitch are what make it stand out but
unfortunately, they aren’t very robust yet. The Hotline feature, a forum for asking questions or seeking tips about cooking, doesn’t have a ton of activity as of now- a lot of recent questions have gone unanswered after more than a week. The app also boasts cooking contests that are live and global, but there has only been one and it was in March 2016. 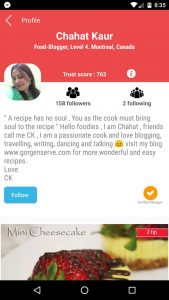 For professional chefs and food bloggers, Restokitch offers a
channel where you can post your own recipes, and gather followers and Trust, a sort of reputation system. This is by far the most fleshed out feature of the app, with a good number of frequent posters and all of them with a few hundred followers each. I would have liked to see even more social features incorporated with this, but for what it is, it works more or less fine.
One complaint I do have is the requirement to log in with Facebook. I would have preferred an anonymous option or at least some varied log in choices so I’m not forced to attach my Facebook account to the app just to read some recipes.

I would recommend Restokitch to someone who was very interested in learning to cook Indian cuisine, or who just loves to eat it. The amount of diverse and quality recipes alone justifies the download for those interested, but the lackluster social aspect makes this app just another face in the crowd.