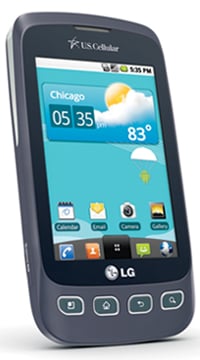 While we all drool over the current cutting edge in Android phones, the likes of the Atrix and Droid Bionic that were announced at C.E.S., another kind of revolution is happening at the other end of the spectrum. A great example is the LG Optimus U, which debuted on U.S. Cellular last month. The sibling of the Optimus T, Optimus S and Vortex, it’s a capable Froyo phone that’s only $30.

(If you’re a current U.S. Cellular customer and in their “Belief Program,” it’s $30 after rebate without requiring any new contract commitment. New customers will need to sign on for two years.)

U.S. Cellular Says: “The LG Optimus U is a good fit for first-time smartphone customers who are looking to explore a wide range of games, multimedia entertainment and time-saving Android applications.”

The Bottom Line: The Optimus U is not an “entry level” phone, it’s a great Android phone for anyone on a budget. I wouldn’t hesitate to recommend it to even the most experienced Android user, if they needed a phone and just didn’t have much to spend.

Phones like the Optimus U mean that folks who never thought about getting a smartphone can do so, and without the compromises of earlier entry level Android phones. And that’s great news not only for Optimus users but also for Android as a whole.