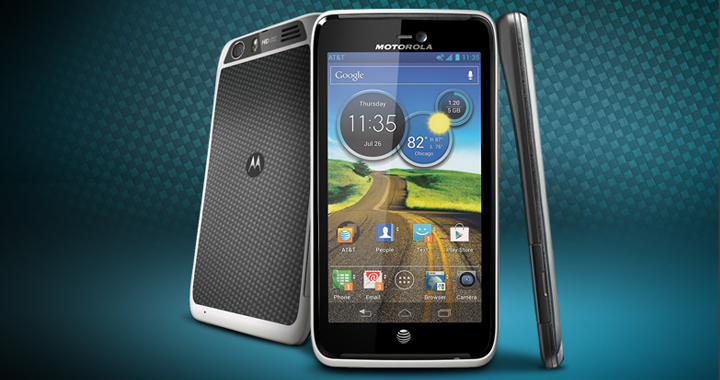 Motorola is rarely a slouch when it comes to mobile devices. Whether it’s phones or Bluetooths, they typically try to innovate and think outside the box a little, even if those gambles don’t always succeed. The big M (now officially part of the big G) was gracious enough to ship us a review unit of the Motorola Atrix HD, a new handset on AT&T’s network with a good price at $99 on contract, some nifty features, and some nice specs:

How does it stand up against other offerings? Read on to find out!

The Atrix HD feels excellent in hand. It strikes the perfect balance between solidity and lightness, while the Kevlar backing and sticky stripe around the sides offer a great feeling of grip. The microSD and SIM slots are stored away behind a plastic flap near the bottom of the left side that does a decent job of blending into the body. The particular pearl white color model that Motorola sent us looks awesome, with the dark grey of the Kevlar and side-stripping contrasting beautifully with the white. The speaker is also plenty loud and clear, for ringers, music, and speakerphone. Motorola also put a coating on the exterior and interior of the device that, according to Motorola,

If there was an oddity, it was the positioning of the volume and power keys all on the right hand side. [pullquote3 quotes=”true” align=”right” variation=”red” textColor=”#bf1b29″]The pearl white color looks awesome, with the dark grey of the Kevlar and side-stripping contrasting beautifully with the white.[/pullquote3]
This is great for a left-handed person, as they’d have easy access to multiple buttons with multiple fingers, making controls and screenshots easier. A right handed person would have to use their singular, lonely thumb. Either doing it Samsung style (with the power on the right and the volume on the left) or like everyone else (with the power on top) seem like better choices. Not a showstopper by any stretch, but a definite odd choice in design.

Moving onto the screen, I’ll just say it’s gorgeous and the touchscreen is quite responsive. Colors pop very well and there’s plenty of detail. Pictures and video both looked fantastic, with pixelation being absolutely zero. The only downside is that it was almost impossible to see in direct sunlight even at the highest brightness setting, which is a definite bummer if you plan on using your phone outdoors at all.

I’ll start the camera portion on a positive note: I was impressed with how clear the front camera was. It handles tricky lighting situations well and without the grainy textures you get from many front-facers. It’ll be great for those that video chat on a consistent basis or like to take vanity shots. 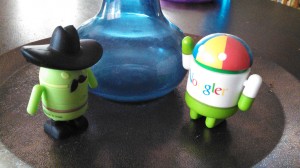 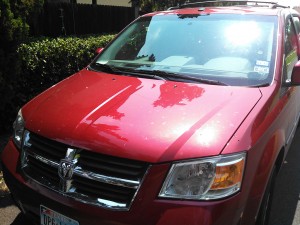 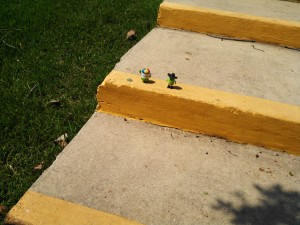 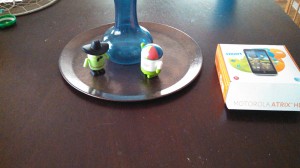 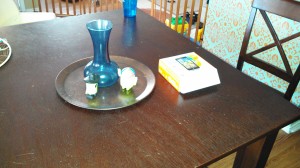 The main camera, by comparison was…unimpressive. In pictures, shadows stayed dark, shadowey and ambiguous, while whites were overbearingly bright, washing out all of the nearby colors, particularly in less than ideal lighting situations. And “less than ideal” covers quite a bit on the Atrix HD camera. Really, the only place where the camera fares well is outdoors in the light. Indoors, or even in the shade outdoors, the camera just doesn’t deliver. Video recorded smoothly, but with the same lighting and color issues as still shots. It’s possible that it’s simply software that isn’t optimizing pictures properly, and if they fix it later with an update, fantastic. For now though, that’s not the case. If you’re a big photo bug, I’d recommend a different choice in device with a better shooter.

Motorola has shipped the device with Android 4.0 (Ice Cream Sandwich) on board, the norm these days, with their own UI elements plastered on top.

Before we get into the UI itself, I feel obliged to say that it’s refreshing to see on-screen navigation buttons on a non-stock Android device. I like the look of them, and in my experience, the on-screen buttons tend to be a bit more responsive than capacitive or hard-style variants. Plus, for those that do the rooting thing like myself, on-screen nav buttons are yet one more thing that you can customize and make your own. I’m a fan. 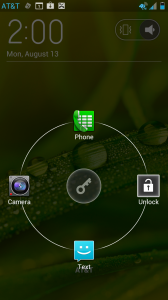 This especially applies to the non-removable AT&T crap that the carrier has decided to burden the user’s device with: AT&T Code Scanner, AT&T Family Map, AT&T Navigator, AT&T Ready2Go, AT&T Smart Wi-Fi, and LiveTV. Granted, some of these apps may be useful for certain customers, but the option to uninstall would be a nice friendly gesture by the carrier. Many of Motorola’s extra apps (excluding Smart Actions, more on this later) by comparison are completely uninstallable. Nice.

Motorola left their mark on the general UI of the software in a few distinct areas. First would be the lockscreen. While Google limits the shortcuts of the stock Android lockscreen to general unlocking and camera, Motorola has given the user four options: Camera, Phone, Messaging, and then the general unlock. There’s also a quick toggle for turning silent/vibrate on and off. All in all, Motorola did a good job here of adding some great features but keeping the Android 4.0 feel. 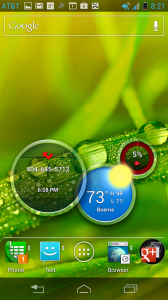 Launcher
The replacement launcher that Motorola used works well for the most part. Down at the bottom you have four replaceable app shortcuts with the button for the app drawer in the middle, like stock Ice Cream Sandwich. The four stock buttons do offer a quick feature that’s actually convenient and useful by showing relevant information if you slide up on the icon; for instance, if you slide up on the phone icon, it shows recent calls.

[pullquote3 quotes=”true” align=”right” variation=”red” textColor=”#[pullquote3 align=”right” variation=”red” textColor=”#bf1b29″]The launcher default home page is the one on the far left. And that’s all it can be. Period. There’s no way to change which page is your home screen… just inefficient. [/pullquote3]
The launcher starts off with one screen. Swiping over to go to the right automatically opens up a new launcher page creation screen, giving you the option to choose to create a completely blank launcher page or select one of several pre-created pages. This is a good option for those that are less tech savvy or just jumping into Android for the first time, and it was a good thought of Motorola.

Where it gets odd for the launcher is that the default home page is the one on the far left. And that’s all it can be. Period. There’s no way to change which launcher page is your home screen. When it comes down to it, this is just inefficient. If I have five pages, that’s four pages I have to swipe through to get to the last page. Personally, I would prefer the center page as the home, in the middle of the action as it were, though regardless of preference, giving the user the choice (like the TouchWiz and Sense launchers) is the best policy. Now, you can double tap the home button which will bring up all of your screens and from there you can select which one you want to bring up…but for most users this isn’t natural. Again, like the power and volume buttons placement, this is more odd design choice than deal breaker. And heck, if it’s that big a deal for you, download a third party launcher.

Beyond the couple of problems listed above, the software worked mostly very well, moving quickly under the power of the powerful processor beneath the hood.

My signal with AT&T was hit and miss. At home and when I went to visit my folks in Dallas, my signal was excellent as were my data speeds. AT&T’s LTE data speed can definitely cook, with my peak speed being over 45 MB/s down and over 21 MB/s up. Where I work in San Antonio, however was a black hole of death where calls and texts would barely go through, though this is just a trouble spot for AT&T. When I got signal though, callers were clear and said the same of me. The dual-microphone setup also did a good job with basic noise cancellation in light wind and decent background noise.

Battery life was also hit and miss. The idle time was pretty good, hitting almost 3 days if I just left it alone. Heavy to moderate use though was another story. In these situations, I was typically needing a charger just after lunch time. Given the huge battery that was squeezed into the still svelte Droid Razr Maxx, the 1780 mAh power pusher in the Atrix HD seems tiny. Given a bigger battery, I’m sure battery life would be a lot more impressive.

The Atrix HD is definitely a good deal for the money if you’re on AT&T. It does very well as a phone in clarity and reception (at least where AT&T is concerned), and really that’s what a phone is for. Beyond that, it hits the spot in build-quality, with only a few real nitpicks. The same goes for the software, most of which can be corrected with third-party downloads. Battery life is also questionable, but for those that don’t stay on their phones all day like I do, this may not be a concern. The only area that the Atrix HD really fails is the camera, and because of this there’s a decent segment of people (those that use their camera as their primary point-and-shoot) that I just couldn’t recommend this for. If this is something that Motorola can fix with a firmware update and end up doing so, I would definitely recommend this phone.