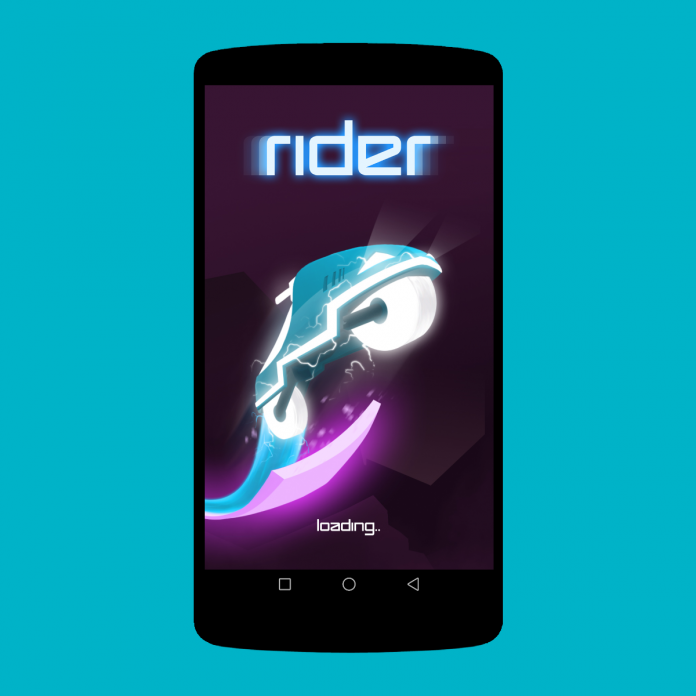 The Google Play Store has games for any kind of gamer. Do you like lenghty games with a lot of content and a big storyline? There’s a huge amount of Final Fantasy games you can try, for example. Are you into car racing? RPGs? Tower defense? Shooters? There’s a vast list of games at your disposal. What if you like shorter, less involved game sessions while you commute or wait for your food to be ready? For you, there are games like Rider.

Being such a simple game, there’s barely any setup or lenghty tutorials. The game immediately throws you into the action. You control a cool-looking bike through neon roads. This path is full of loops, steep slopes, chasms, and falling platforms. In order to accelerate your bike, you need to tap and hold anywhere on the screen.

Since there are a lot of ramps scattered throughout Rider’s levels, there’s the possibility of doing flips mid-air. Curiously, they are also done by tapping the screen and holding while mid-air. You don’t need to do it right away: you can start flipping quite literally mid-air. When you feel like you are overdoing it, just release your finger and the flipping stops. This is obviously not realistic at all, but you are controlling a driverless bike that is going through neon roads with moving platforms. What do you expect?

Needless to say, if you fall, crash, or execute an ill-fated flip and land upside down, it is game over for you. To track your progress, you get points as you go through the levels. You get additional points for each flip you perform successfully. The game will tell you that you are doing well with on-screen compliments a la Candy Crush Saga. 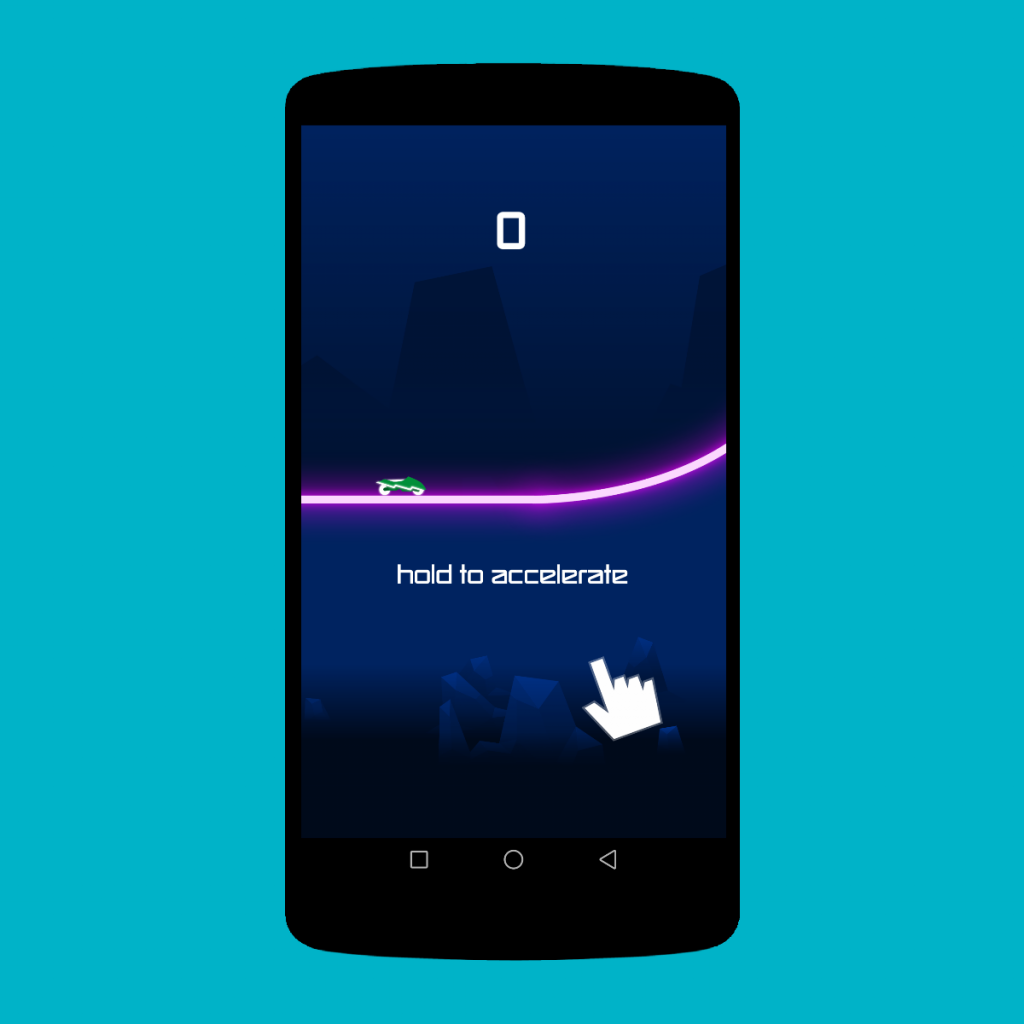 All levels have gems scattered around, and you also earn them just by going as far as you can. These gems are used for buying new bikes or vehicles in general, which, as far as I know, are purely aesthetic. The bikes that I have unlocked do not handle differently or anything. They just look cooler than the one you start with (although that one looks pretty cool as well).

In order to keep you playing, the game has several incentives that spice up an otherwise linear experience. If you launch the game X days in a row, then you get free gems. A particularly interesting idea is that you can do challenges while playing. These can be tasks such as doing a number of flips on a run, get a number of points, or similar. They are fun to do and, upon completion, they yield additional gems. 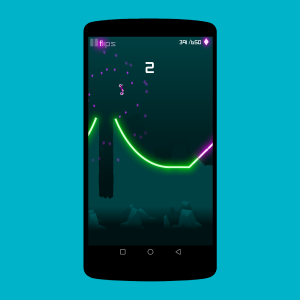 While the game can be fun, my main gripe with it is the control system. I am not the best gamer in the world, but the fact that the same control is used for accelerating and flipping has introduced additional frustrations. Sometimes I want to start accelerating before I touch ground so that I can continue with my momentum, but, since I’m still mid-air, the game thinks I want to flip. This has led to a lot of unintended deaths in otherwise enjoyable runs.

I thought that I would get better at the game as time went by, but that never happened. I understand that the developer wanted to make the controls as easy as possible, but sometimes it doesn’t quite work and you need a system a little bit more complex.

Other than that, the idea behind introducing challenges is very nice, since it provides a nice break from only trying to improve your high score. Also, the stage changes as you improve, so that the game is not as repetitive as I thought it would be at first. The developers understood the limitations of making an endless game, and tried their best to counteract them.

Finally, if you don’t like ads, but refuse to pay for their removal, then you’re going to have a hard time with Rider. Fortunately, the game does not have an ad banner while you are playing. However, as soon as you die, the game makes sure that its numerous ads are clearly visible. Sometimes you even get full-screen ads, which, in my opinion, are the most annoying concept of mobile gaming. You can remove them through an in-app purchase of approximately $2 if you want to keep your sanity. 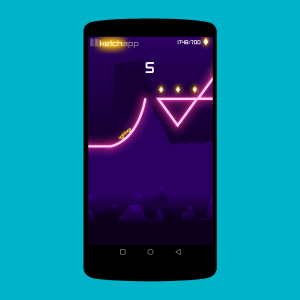 As I said previously, the graphics for this game are all made of neon outlines with very bright colors. They are nothing fancy or very detailed, but they get the job done. Also, the colors of the road and your vehicle change with each new run you play, in order to avoid falling into a monotonous situation.

Since there is no on-screen controls, the main screen is uncluttered and has barely any additional elements. I didn’t suffer any slowdowns or lockups either, thanks to the simpleness of the graphics. All of the bikes (and cars) I’ve earned are quite unique, so at least you have an incentive to get them all.

The screen that appears when you inevitably crash shows your current score, your high score, and a plethora of other elements, such as the bike shop, the gem store, the options screen, and similar. Also, it shows the amount of gems you currently hold and your progress in challenges. Since there’s nowhere else to put these elements, then everything has to go under this screen, which makes it look a little bit cluttered, especially after coming from the game’s clean interface.

The soundtrack of this game is composed of techno tracks that combine really well with the neon graphical elements. They are nothing to write home about, though, but, just as the graphics, they get the job done pretty well. Sound effects are present for several actions, such as getting gems, crashing, and pressing buttons. Also, your vehicle makes an engine sound when you are accelerating in an attempt to bring a little bit of realism. 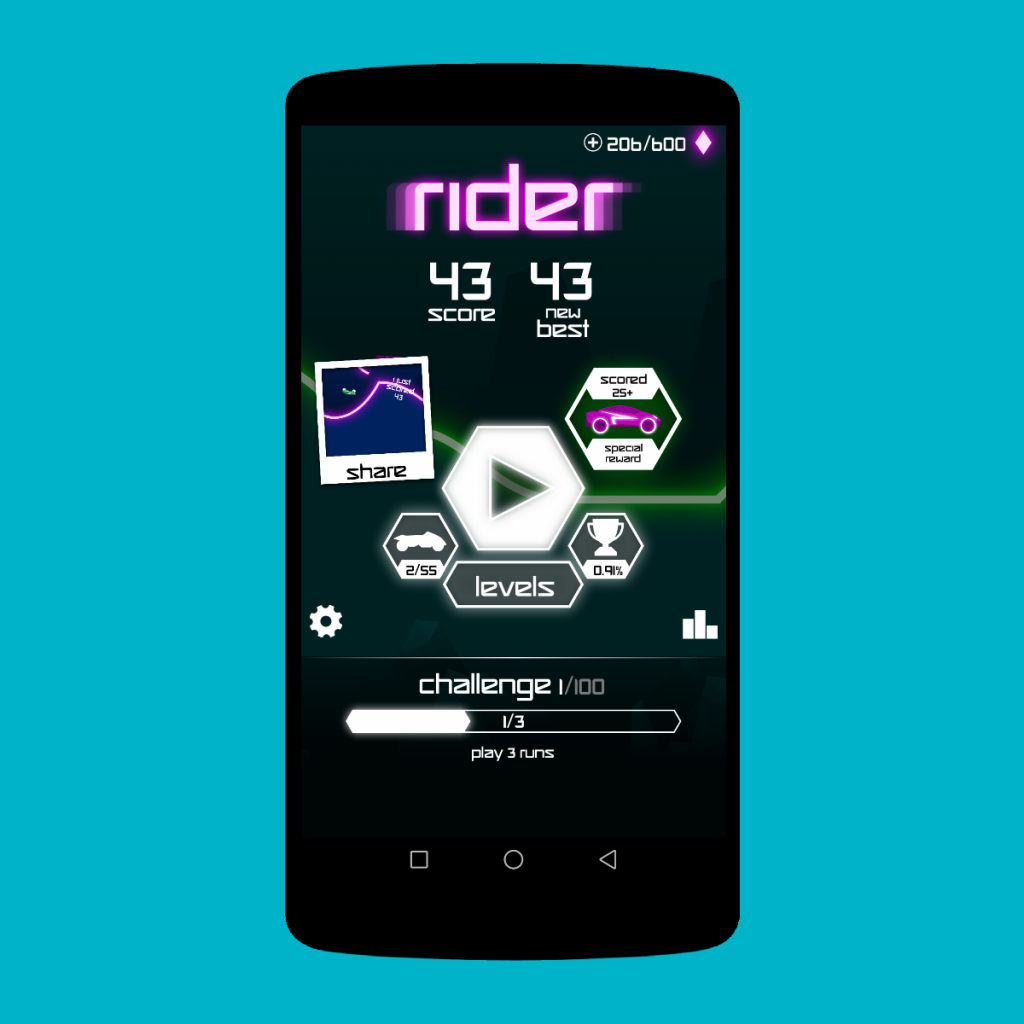 Rider could me misinterpreted as another run-of-the-mill endless game, but it has a few elements that try to set it apart from other games in the genre. The daily rewards and challenges, although not new in the industry, are a nice way of keeping the game fresh and making you come back every day for a quick run.

However, I could never really get into the control system. Crashing because the game thinks that I want to flip when I really want to accelerate is no fun at all. Nevertheless, if you manage to get used to the overly simplistic nature of the controls, and if you like games where your main purpose is to improve your score, then Rider has more content than your average endless game.

Download and install Rider from the Google Play Store.