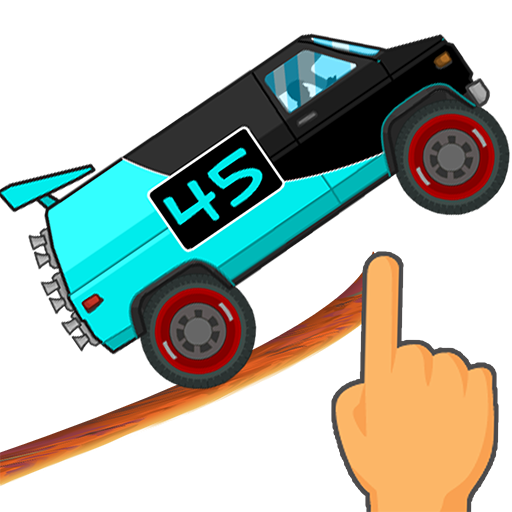 Road Draw is a driving puzzle game that tasks you with drawing a road for your car to drive on while avoiding obstacles and collecting coins, going as far as you can before you run out of gas.

Road Draw is reminiscent of old Flash games like Line Rider, where you draw a course and let the character traverse it to completion or until they fail. However, Road Draw doesn’t quite live up to expectations and is rather simple. You simply drag your finger across the screen to make a path for your car to get across. You have to collect gas cans to keep going, and only fail when your car flips or you run out of gas.

The gameplay is simple, but the difficulty is raised by a mix of the car physics and the level design. The car seems to want to flip forward and has difficulty with upward inclines or drops of any kind. It makes for a frustrating experience and the game winds up being a test of your patience after a while.

The graphics are rather simple as well, with a basic cartoon style and no significant animation or stand out visuals at all. The music, on the other hand, is cool sounding but the in-game tunes are rather intense and out of place for the pace of the game. It has a rather hard rock vibe to it, with guitars and a fast tempo. The gameplay is rather sedated in comparison, and there’s no engine sounds to accompany the music either.

Overall, I was disappointed by Road Draw’s lack of unique features or compelling reasons to play it over similar games. There are no additional track types, only 10 cars, and two stages to play with. I would have liked to see more variety and puzzle elements added to make this game stand out more, as I rather like the “draw a track” style game from my grade school days of playing in the library.

I would still recommend Road Draw to someone looking for a simple puzzle game, maybe for their kids. It has a decent amount of replay value and challenge to keep you busy for a while and it is at least functional and isn’t filled with bugs or incomplete content.