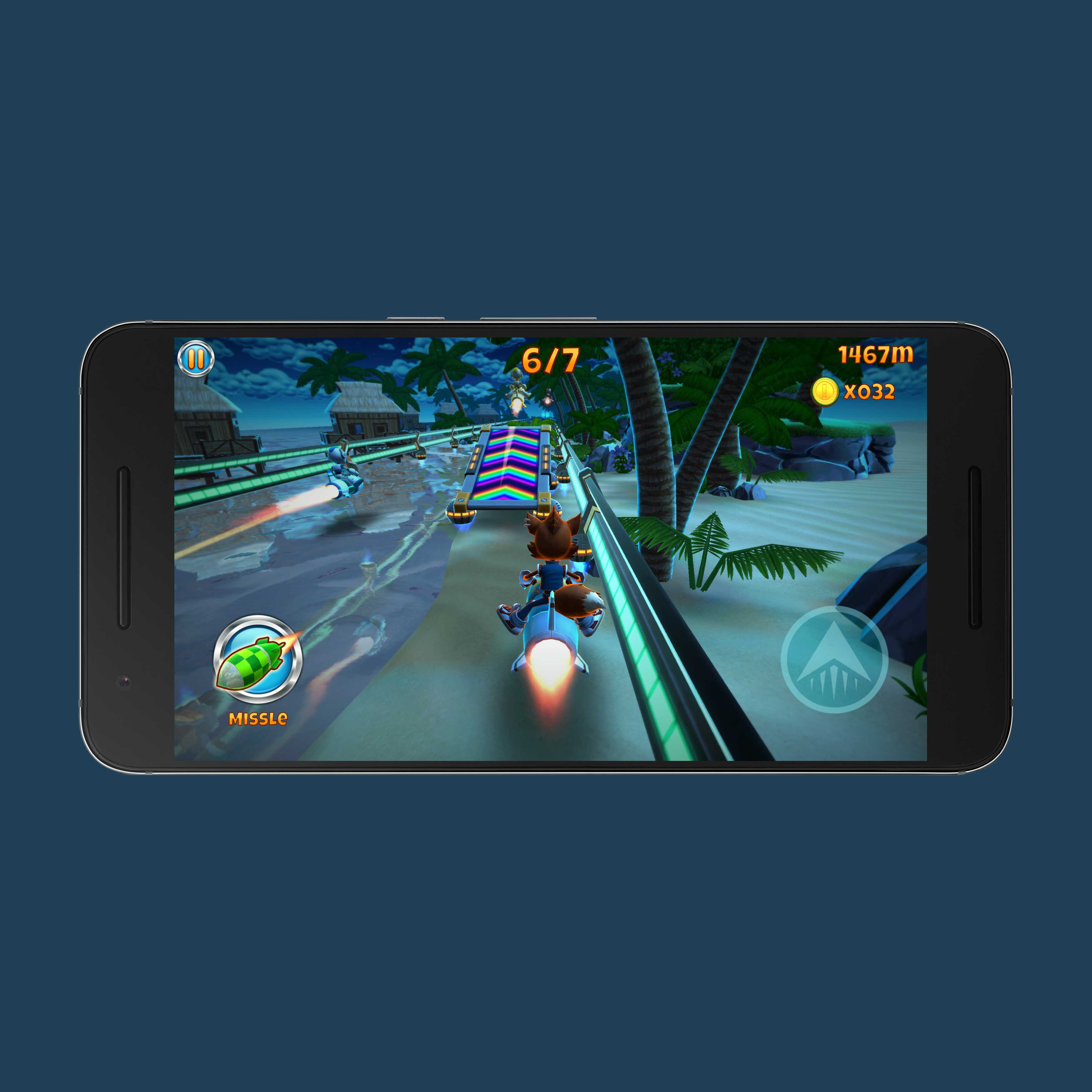 Rocket Racer is a strange combination of familiar tropes; it’s a racing game that’s also a straight-line runner, that’s some combination of Star Wars Pod Racer and Mario Kart. The goal is to ride your rocket from point A to point B before the other racers, while collecting coins and power-ups and dodging obstacles. In between races you can upgrade your racer and your power ups with coins you collect in-race.

Rocket Racer was about as painless as I’ve seen a game to set up; login with Google Play if you want, and then get to racing.

I’m going to be honest, at first I did not like this game. The rounds were too short, the controls too touchy, the lack of a variety of racers was frustrating…lots of things turned me off about it. But then I started playing, and something changed. I couldn’t tell you what it was; the races are still very short, the controls are very sensitive, and there are still only two racers to choose from, but I was having fun doing it.

The stages in Rocket Racer are these adorable little themed, single-direction levels littered with coins (used as currency to upgrade your racer, power ups, or purchase a new character), power ups (which look exactly like Mario Kart power ups, and function similarly), and environmental obstacles (ranging from rocks and trees to speed boosting ramps and explosive barriers. There’s a wide range of power ups to use, including: Rockets (three different kinds), Electric Shields, Time Slow, High Jump, and Invincibility. These power ups are generally not game-changing, because the races tend to be between 20 and 30 seconds long, but they can turn the tide if you’re clever with their use. With vibrant, full-3D graphics and a charming soundtrack, Rocket Racer’s production value is high as well.

Rocket Racer is ad-supported, but the ads are generally one of two varieties – small banner ads at the bottom of the screen, and large, full screen ads after every few races. Very reasonable, very unobtrusive.  You can also buy Coins using real money, though in the experience I’ve had thus far that is completely unnecessary.

Rocket Racer is a fast paced romp through a couple dozen courses – ads are reasonable and in-app-purchases are unnecessary, so for the price of entry, this is a quality game that’s bound to help you waste some time.