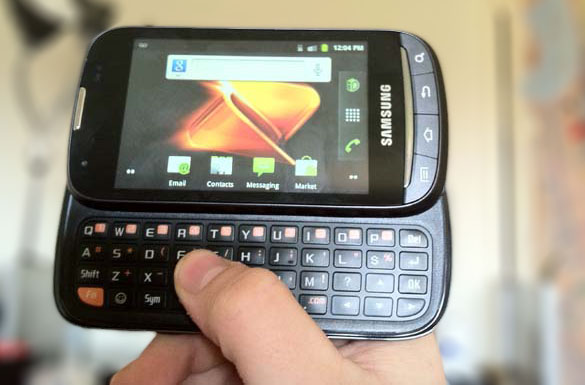 With a $229.99 price tag and decent specs to match, the Transform Ultra is no ordinary “pre-paid” smartphone. For all you doubters out there laughing at the sight of a $200+ phone that doesn’t include 4G or a dual-core, did I mention there is no contract? That’s right, you are buying this phone outright! Now consider buying a “high end” phone off contract and you’ll find yourself out $600-700 and let’s not forget about Boost Mobiles low cost plans. For just $50 a month you get unlimited everything, then every 6 months of keeping your plan (which do not have to be consecutive), the monthly cost drops $5. Five dollars may not sound like a big savings, but when you’re down to a $35 a month unlimited everything plan, you will surely rethink that statement.

When I think of a pre-paid device, I think of cheap plastic, lightweight, and boring design. Well, the Ultra only carries one of those traits — lightweight. For a full QWERTY device, the Ultra is very light and surprisingly stylish. With a gray/chrome color scheme and grip texture on the back, the Ultra feels like a high quality device. The 3.5″ screen is probably one of the few down sides to the phone, with a resolution of 320×480, text is a bit small, and websites are very pixelated until you zoom in enough to read. Also, the screen became unresponsive while moving icons around (see video for an example). The Samsung Transform Ultra is a slide-out QWERTY device, so obviously, it’s not going to be the thinnest phone around. Fortunately, since the phone is a small form-factor, the thickness of the Ultra feels surprisingly thin. One feature that was nice to see was a hardware camera shutter/auto focus button. It’s funny that these 8MP phones don’t have a camera button, but a 3.2MP phone does. Speaking of cameras, Samsung was able to squeeze two cameras into this small device — a front facing VGA camera and a rear facing 3.2MP camera with flash. As for the QWERTY keyboard, it was well spread out, but too flat, not OG Droid flat, but flat and very clicky.

There’s nothing I hate more than annoying overlays covering up the beauty of Android. I think it’s safe to say almost all phone manufactures have their own sort of skin: HTC Sense, Motorola MotoBlur, and Samsung’s TouchWiz. With that said, I was relieved to see stock Android 2.3.4 on this phone (note this phone does have Sprints iD packs). Not to mention all the added speed it brings to this device, which is present, since this phone blows through tasks and laughs its way through the quadrant standard benchmark. Another annoying thing manufactures like to do, is loading up their phones with bloatware upon bloatware. So with that in mind, let’s count the amount of bloatware the Ultra has — 1! The Transform Ultra has one piece of bloatware, which I don’t even consider bloatware, ThinkFree Office (a document creating application). Samsung really did a great job not messing up the Android experience on this device and gave us a free (useful) application.

To say this phone is your average “pre-paid” smart phone would be an insult. Underneath the solid build of this device is a 1GHz single core processor. Before looking away, because this is not dual core, hear me out. The phone was fast to say the least. The Ultra rivals my Droid 3 any day and blows through tasks. For all you guys and girls out there that can take someone’s word, I ran some quadrant standard tests. Compared to the norm 1000-1500 range that most phones of this caliber achieve, the Ultra whipped out consecutive 2000+ scores. With the speed of this device covered, next comes how well the battery stood up. Most smartphones nowadays seem to have 1500mAh batteries powering their dual-core, 4.3″ screens, and quite frankly, they can’t handle it. That’s why my Droid 3 can’t last more than 4-5 hours, well, when you pair a small, low-res display with this battery, you get flipped results. With the Transform Ultra, I got about 19 hours with hardcore use and 5-6 days on standby. If I may say, this is the type of battery performance we should be seeing in all phones.

I find myself forgetting that I review phones, you know, the things that are merely meant to call people. Well, after almost overlooking this category, I made a few calls. Just as you would expect, standard clear call quality and a surprisingly loud speaker phone. As for data speeds, I don’t usually cover them unless the phone is 4G or “4G like” speeds, but I did anyways. My highest download speed was 2.03Mbps and my highest upload was .70Mbps. While those aren’t the fastest data speeds, they actually beat the speeds I get on my Verizon Wireless device.

The Samsung Transform Ultra has a 3.2MP camera so do not expect much. I have embedded some photos in the gallery below the video review. I do have to give a little bit more credit for adding a dedicated camera key and a front facing camera. Also, the Transform Ultra does not have HD video recording, so “while biting your tongue” you can check out the video quality below.

As you can tell, the Transform Ultra breaks the barrier between “on contract” phones and “pre-paid” phones. I can certainly say, if I was going to leave Verizon for a pre-paid carrier, I would be sprinting to my nearest Boost Mobile store and picking myself up a Samsung Transform Ultra. Don’t forget to check out the full video review, photo samples, and devices shots, all listed below.