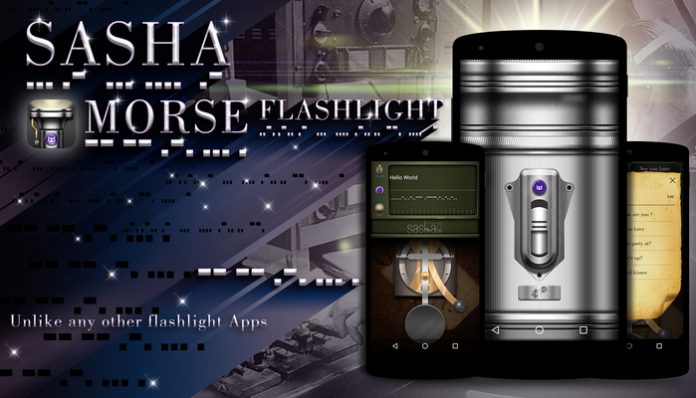 Sasha Morse Flashlight is a flashlight app with a built-in Morse Code generator and guide, to help you learn to read and write, as well as send messages automatically, in Morse Code.

Sasha Morse FLashlight is a pretty standard flashlight app. It has the same switch and sounds, and triggers your camera flash as you’d expect. However, if you press the little purple button above the lightswitch, a new menu appears, and grants you access to the morse code generator.

The morse code generator allows you to input text, then press the send button and it will transcribe whatever you have written into morse code that flashes from your flashlight. The app also offers a handy guide to the letters and symbols of morse code, in case you wanted to try to write it for yourself. The feature works as expected and is harmless, but I really can’t see a practical application for it outside of a bit of fun. Very few people I know can read morse code, so sending them a message in it seems rather pointless, and I imagine many are in the same boat.

Otherwise, Sasha Morse FLashlight isn’t a terribly unique app. The flashlight app has been around in some form or another since the earliest smartphones, and some have more practical and useful features than Sasha Morse does. The morse code is a nice novelty, and works well but just isn’t something that makes it a must have over other flashlight apps, if you still use them.

I can see this app as appealing to someone who wants to learn morse code, or uses it regularly for whatever reason, or maybe someone who is interested in morse code for historical reasons. Other apps do flashlights better, and even now they are becoming obsolete as phone manufacturers include flashlight functionality baked into the phone at launch, making this an even harder sell.