Remember Sky Map? One of the ol’ standbys of the Android app world?

Of course you do!

“What do you mean, not Google?”, you ask? Well we’ll get to that in a moment. But for now I’d like to (re-)introduce you to one of the oldest, yet coolest, apps around: Sky Map.

Sky Map is just what it sounds like: it’s a free app (download here from the Play Store) that uses your phone or tablet to look deep into outer space, using your device’s compass, GPS, and/or gyro to locate multiple celestial entities in real time as you hold your device in a given direction.

Born in 2009 (eight years ago!) in the labs of one Google, Inc. out of Mountain View, CA, it is one of the increasingly rare apps to survive to today’s world.

Let’s think about that for a minute:

OK, so this app has staying power. Now, what about this “not-Google” thing? Everybody refers to this app as ‘Google Sky Map’.

But guess what: Google abandoned this app waaay back in 2012. Since then, it’s been released as open-source software, and has been maintained by a volunteer team of Google engineers. How cool is that? Heck, as of today, I even thought it was still ‘Google Sky Map’. So I’ve learned something today, and should just go to bed now. 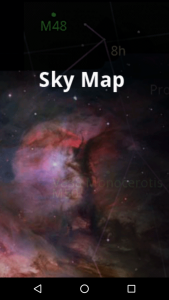 All that said, the app is pretty straightforward, while still looking and feeling rather fresh. Upon opening the app (after downloading from the Play Store, of course), you breeze through the title screen and are immediately taken right into the app itself (you will be asked for a couple of permissions if you’re on Marshmallow or later, but nothing too snoopy).

You hold your device up in front of you, and the app uses your GPS, compass, and gyro to display the current layout of the heavens before you on your display. The app keeps the display current to your location and time of year, so if you look, say, to the northwest sky on March 6, it will look different in June, then in September, and so on. At night seems to be the natural time to try this app, but it works just as well during the daytime.

The app gives you several levels of adjustment, staring with the overlay of what you can see in the sky. You can toggle on and off the following layers (including their labels):

Looking around the sky with all the layers on, there is a ton of information and items to digest on-screen. The kiddos love looking for the moon, planets, and popular constellations; in that order. The app is extremely responsive as you move around the sky, in elevation, rotation, and vertically. There is also what I call a ‘night mode’, that turns all the colors to simple blank and red, to relieve eye strain.
While you can hold our device in any orientation you choose, I find keeping it in landscape is both most comfortable, and gives the feeling of looking through a pair of AR goggles to see the night sky.

There’s also a settings menu, with some basic location adjustments. Also in this menu, you can select ‘Gallery’ that offers up some nice renderings of interesting objects in the sky.
Another rather neat feature is what’s called “Time Travel” this lets you choose a date and time of day to let you peer into the sky at that time.

Even with being as, well, vintage as it is, Sky Map is still a credibly cool app to have on your device. It’s been a day-1 staple on all my phones going back to my first Android (Galaxy S1, people).

My kiddos and I still pull it up when the conversation steers space stuff, and it always keeps us occupied for way longer than it probably should….we always find something new or interesting in the sky. Even looking down brings good space-related dialogue I, and how the other side of our planet sees things.

I highly recommend you give this a whirl on your device. I’d say you should hurry, but this app may outlive us all, so when it’s convenient should be fine. :)