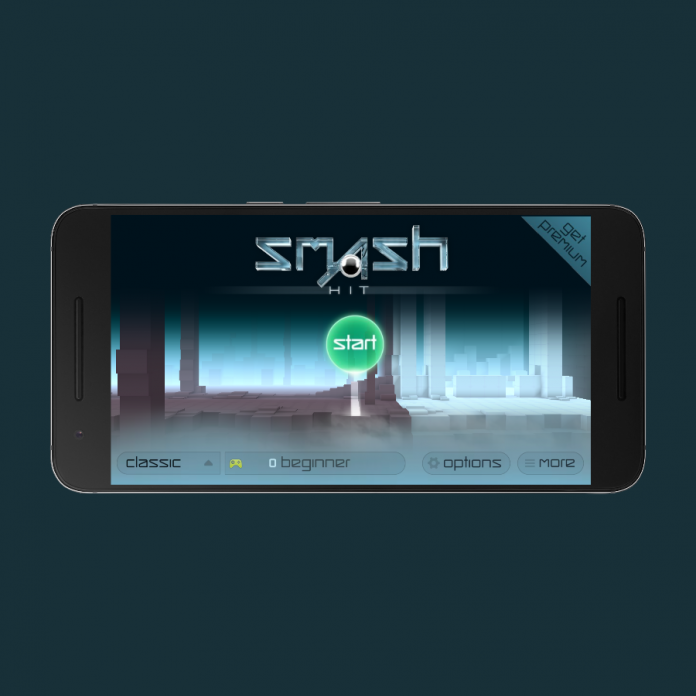 In an era of soulless clones being uploaded every day to the Play Store, it is always good news to see refreshing games that bring forth new ideas or consolidate previous ideas in a nice package. Or sure, why not both?

Enter Smash Hit, by developer Mediocre, who isn’t mediocre at all, since it has delivered a neat, polished game, distancing itself from the masses who offer endless games with unforgiving difficulty and pixel graphics. Instead, Smash Hit provides a relaxed but challenging gameplay with some of the most refined graphics I’ve seen in a game lately.

Think of Smash Hit as a first-person on-rails shooter. But, instead of firing bullets, you fire metal spheres. Your goal is to go as far as you can while using these spheres as protection from incoming hazards. You do this by tapping anywhere on the screen, but you have to be careful and account for gravity.

Almost all of the elements you can interact with are made of glass, so throwing a ball at them will break them. There are some pyramid-like elements that, when broken, yield three new spheres. However, the rest of the glass barriers are there for blocking your progress, so you need to break them to progress. The game is over when you run out of spheres.

And it’s easy to run out of spheres, especially if you’re not careful. This is because you lose TEN spheres when you hit a hazard. Yes, ten. That’s a lot but it makes you super cautious about your movements, increasing the tension and immersion in the process.

After a certain distance, you will reach checkpoints. When you eventually die, you can choose to start your game from these checkpoints instead of starting from the beginning. To use this feature, however, you will need to pay for the premium version ($1.99). This will also unlock new game modes and add a cloud save option. If you decide to go the free route, then you’re stuck with starting from the very beginning on all of your runs.

Every day we are seeing more and more games throwing insanely difficulty levels for no reason. Your mental health will thank you, then, because Smash Hit is not a difficult game in the sense that it doesn’t throw you impossible tasks. You just have to be careful and you’ll be fine.

This is not to say that it will be a walk in the park. There are a lot of things wanting to block your progress. I still have a hard time trying to hit the switches for opening doors between sections. However, this is the kind of game you would want to play to sit back, relax, and have a good time.

Levels get progressively more difficult and imaginative as you traverse the game. A lot of moving, spinning, and rotating elements will start to appear out of nowhere. There’s even some kind of electricity walls that you disarm by hitting a block on the side of them. It’s really fun to discover new stuff as you progress through the game, preventing the novelty from wearing off.

In a really strange decision, Smash Hit doesn’t log you into Google Play Games automatically. Instead, you have to do it through the options screen yourself. This means that, until you log into it, your progress will not count towards achievements.

Make sure you do this as soon as you start playing, and let’s hope that the developer implements a more streamlined way of connecting to Play Games, as thousands of other developers have already done.

Anyways, the achievements aspect of the game is very entertaining, and there are some pretty complicated ones that should give you a decent challenge, such as gathering 300 balls or playing 2000 meters without crashing.

Graphics are, without a doubt, the highest point of this game. The environments you fly through are very varied and imaginative, and, even though there’s a rather limited colored palette, the game’s elements look fantastic and detailed. Special mention for the animations, All animations are very fluid, even in a device with average specs as the Nomu S10.

There are several areas and each one of them has a different design theme, so the game feels less monotonous this way. Coupled with the impressive sound effects, the audiovisual experience provided by this game is absolutely top-notch.

Speaking of sound, the developer has done an awesome job in converging both audio and graphics to create a cohesive experience. Not only the music is of great quality but it does a fantastic job of bringing a distinguishable aspect to each section of the game. It features very relaxing tunes that let you enjoy the journey through this glass-ridden land.

Smash Hit deviates from traditional offerings in the Play Store in a good way. Providing gorgeous visuals, respectable audio elements, and a fun gameplay that is as simple as it is entertaining, this game manages to offer gamers a lot more fun than the normal “endless and unforgiving difficulty” combo that we see with more and more frequency in Android’s marketplace. In order to fully enjoy the game, the developer asks for a $1.99 purchase, but I think that it is totally worth it to pay such a small fee for a highly polished and elegant game as this.

Download and install Smash Hit from the Google Play Store.