For those of you too young to remember (damn, does typing that make me feel old), Sega used to be a really big deal. It was Nintendo’s chief rival, with Sonic playing the part of Mario. Sonic’s library of games spans every generation of console and dozens of titles since 1991, beginning with this one – Sonic the Hedgehog. 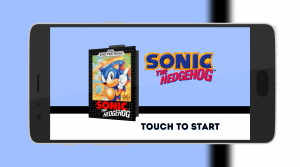 Generally speaking, the games revolved around an anthropomorphized hedgehog (that does not look like the notoriously slow hedgehog at all) running around at blazing speeds collecting rings, saving roboticized animals (that are strangely not anthropomorphized), and later, collecting Chaos Emeralds; all while battling the nefarious Dr. Robotnik. Still with me? No? Oh well – the short of it is that the games were mostly, as many games of yesteryear tended to be, a side-scrolling platformer.

What made this game different, though, was its sense of verticality. While Mario often jumped into the air to reach new heights, he rarely ever elevated to another screen entirely, or descended below his starting location in any given level – Sonic’s levels, by comparison, often involved backtracking and changing elevation in order to advance. Furthermore, Sonic’s collecting of rings – and a finite number of rings in each level – encouraged exploration in a way that Mario games of the time never did. 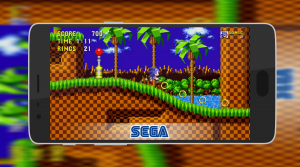 Sonic’s early games could be played a couple different ways; either you can explore each level thoroughly, collecting all the rings you could find and figuring out the proper amount of speed and distance to grab hard-to-reach locations…or you could zip around at Mach Jesus, blitzing through the map as fast as hedgehog-ly possible. Either method, however, requires good timing and precision jumping in order to avoid hazards, reach platforms, an generally navigate the map. On a gamepad, those precise jumps are pretty doable – on a touchscreen with a virtual joystick, though? Forget it. Gaining any kind of momentum moving to the left is next to impossible, making backtracking or fighting a boss a nightmare.

Which brings me to the crux of the matter. Sega has done a wonderful job of recreating the world of Sonic using original assets, as well as some additional content from the Sonic and Knuckles expansion cartridge. But its work on the migration from gamepad to virtual controls did not fair well. Instead of sticking with the tried-and-true Directional Pad that worked so well in the past, it went with a wildly unresponsive joystick that makes precision movements impossible. 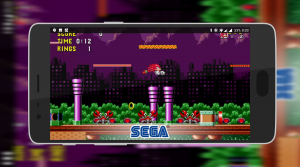 Story time. I used to play Sonic the Hedgehog (2, not 1 or 3) with my little sister when we were young. She would always plug in a second controller to play Tails, and I would always inevitably leave her behind, only to see her come flying back in with her little whirly tail. The blight of being an older brother, I would always think. We played that game for hours. We played other games too, but that one was one of my favorites (along with the Streets of Rage series – hint hint, Sega).

Aaand we’re back. I spent hundreds of hours on the Sonic franchise when I was young – which makes it all the more disappointing that Sega flubbed the delivery so spectacularly. If you can master the finicky and clumsy controls, you’re in for a treat – Sonic the Hedgehog is an absolute gem of a classic, and a true shot of nostalgia for old-school gamers.