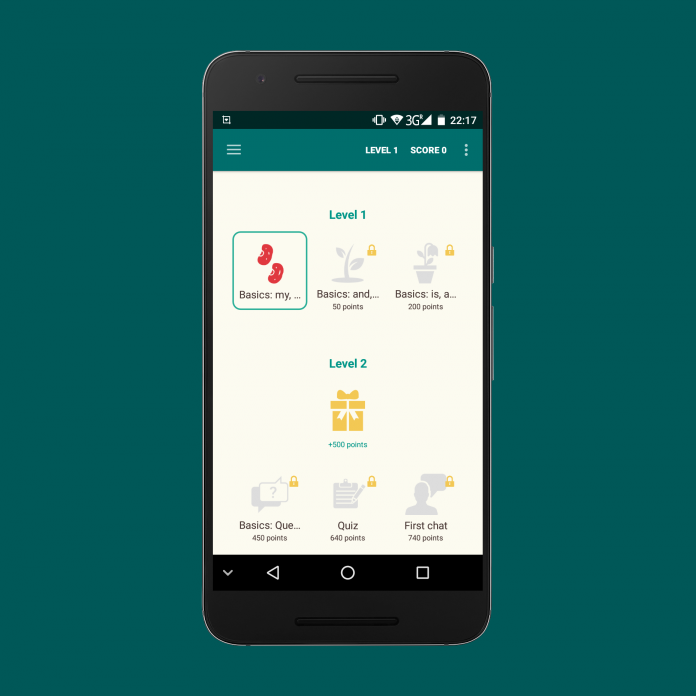 Learning languages is, in my opinion, one of the most fulfilling things you can do. This is especially true when you are in a country where they speak a different language than yours. The feeling of accomplishment and satisfaction you get after slowly starting to get what it is written on the streets or finally being able of going to the grocery shop without pulling your phone to use Google Translate is extremely rewarding.

Being a native Spanish speaker, I’ve had the luck of learning English, German and Estonian, so I know how hard can it be to learn a new language (especially Estonian, which is very different from Spanish). Thanks to technology and our mobile-centric world, things are a bit easier now, and services such as Duolingo and Babbel have gained popularity, while companies like Rosetta Stone have had to adapt in order to also offer mobile solutions. Developer Edushire doesn’t want to get behind, and has released SpeakTribe, an app which will help you to get started on the beautiful world of the Spanish language.

The app lets you select between five different levels to begin your journey. Even though it is my native tongue, I chose the beginner level in order to experience the app right from the start, and because there is a chance that most people who are adventuring into the language will choose this level as well.

After that, and some other background information questions, the exercises start right away. There’s no waiting, no choosing, no scrolling, nothing. You are immediately thrown into the exercises. I like this very direct approach: makes things uncomplicated and to the point.

Through the use of both written and spoken exercises, SpeakTribe aims at slowly introducing you to words and small sentence constructs.

When you speak in your native language, you tend to just take things for granted, but now that I’ve seen how a non-native speaker has to learn the language, I can say that SpeakTribe does a good job in explaining small nuances that Spanish has.

For example, if you want to say “I am Ecuadorian” in Spanish, you would need to say “Soy ecuatoriano.” However, if you would like to say “I am busy,” then it would be “Estoy ocupado” and not “Soy ocupado” as logic would dictate. Even Estonian would say “Ma olen equadorlane” and “Ma olen hõivatud.” God knows why we don’t. And let’s not get started with other aspects, such as age, in which we literally say “I have 25 years” (Tengo 25 años) instead of “I am 25 years old.” It’s a mess.

This kind of stuff is well explained throughout your exercises, although I’m pretty sure that it would take a bit of practice to get a grasp on it. Unfortunately, there’s no way of going through all of these tips after seeing them on your exercises, so if you can’t remember it, then tough luck. This is a really bad aspect of the app and one that should be addressed immediately.

Normally, exercises consist of sentences in Spanish accompanied with a highlighted phrase and choices in English. Your job is to choose the correct translation. Sometimes the app will give you hints, sometimes you’re on your own.

Each correct task will give you points, which will all add up in order to unlock the following labels. In between levels, you will have tasks that deal with having to infer stuff after reading a text. These texts normally have a vague investigation aspect to them. They normally use a lot of new words and are an interesting way of practicing the language in a different way than the regular exercises.

A big part of SpeakTribe, and a huge part of learning a new language, is speaking and listening. For this, SpeakTribe has added support through Google Text-to-speech engine. It is responsible for talking to you in a nice Spanish from Spain, not from Latin America. For the most part, it works fine.

I haven’t had instances in which the engine didn’t recognize what I said (although that might have something to do with my proficiency with Spanish, but I deliberately pronounced stuff in a weird way and it worked as well). Also, it does a good job in reading stuff on the screen for you, so you can hear how things should come out of your mouth.

In my opinion, the voice tends to pronounce the last syllabes in a weirdly long way. For example, some exercises talk about a friend of yours coming from India, and it emphasizes the “a” a lot. Like “Indiaaaa.” This is not a problem with the app but with Google’s engine, but it is unfortunate since people learning could think that this is the way of pronouncing stuff.

If you think the voice is talking too fast for you, then in each section where there is a possibility of hearing a phrase, there is also a slider which you can move left or right in order to adjust the speed of the voice. I’m sure that this will be an extremely convenient option for a lot of people.

Normally price is not a category on its own, but it is something to pay close attention to in this case. SpeakTribe is free until a certain level (four, to be precise). After that, you will have to pay. There’s a total of 25 levels you can buy, divided into intermediate levels ($11.00) and advanced levels ($18.26). You can also buy them together at a discount ($22.86).

Now, that is expensive for your usual in-app purchase, but actually it is not that much if you consider how much private lessons cost, but then, it is like comparing manzanas to naranjas. If you compare it to Rosetta Stone, then it is also cheaper, but Rosetta Stone includes stuff such as sessions with other students, phone calls with native speakers and much more content. Then if you compare it with Duolingo, which has a lot more content, gamification and better interface, SpeakTribe doesn’t fare well. Babbel has a similar system, but SpeakTribe’s one-time fee vs Babbel’s recurring subscription gives SpeakTribe a little edge, at least price-wise.

The most important option available is the enabling or disabling of daily words. This feature sends you a notification with a new word in Spanish every day. I think it is worth it to keep it on, since you will learn a new word every day without you lifting a finger.

You are also able to backup your data to the server through your Google account. That way, you can progress through the course on different devices.

Other options available are not as noteworthy, such as toggling sound and vibration and speech recognition strictness.

Overall, I think that you could end up catching some words and understanding some structures with this app. Mastering a language is hard, and you will probably need some kind of interaction with someone else.

The interface is a little on the bland side (especially after using Duolingo), but it gets the work done. The word of the day notification is very useful to create a habit of practicing every day. If you are serious into learning Spanish, then you could definitely start with SpeakTribe. If it works for you, then $22 is not that expensive to continue your lessons. Just don’t expect to understand everything Alejandro Sanz sings in his melodies.

Download and install SpeakTribe from the Google Play Store.