Before reviewing this app, I have never used a battery saving app. In the early days of Android, I used task managers, but that eventually went to the wayside as Android eventually became fairly efficient at managing the phones memory. I ended up in the school of thought that Android itself was better at managing its memory than a 3rd party app. Battery savers have generally been in that same category for me until now.

Sometimes you have to give something a try before you can change your mind. DU Battery Saver was that shot for me.

DU Battery Saver is a free app on Google Play. It has one mission and one mission only, to save your battery life. When you fire up the app you are greeted by  a screen that displays some battery stats and a single button that says “OPTIMIZE”. When you select optimize it will go through and kill apps that are draining your battery.

There are three saving modes that you can utilize free of charge, Phone Cooler, Advanced Saving, and Notification Saving. There are other modes that you can unlock with coins. The coins are awarded by installing other free apps.  You can also unlock them by purchasing the PRO version of the app for $2.99.

Advanced Saving will allow you to kill apps that are running in the background that you don’t need.

Notification Saving will close out apps and notifications that are draining your battery.

DU Battery Saver also has the ability to whitelist apps. So if you’re waiting for that important email, you don’t have to worry about it getting closed by the app.

There is also a game booster feature that allows you to speed up your game loading times. I noticed that this worked marginally better. In fact, I didn’t notice a very big difference at all. 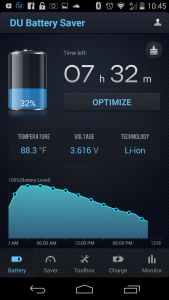 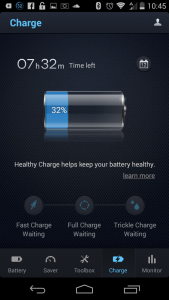 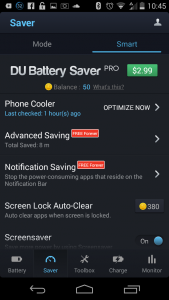 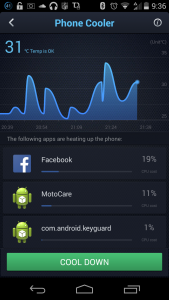 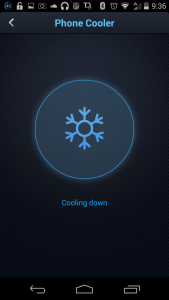 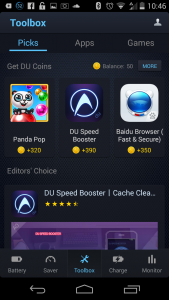 The setup on this app starts off easy. Just download the app from Google Play and install it on your device. After that, it’s pretty easy if you know what you’re doing. If you watch the embedded video in the previous section, you’ll see just about everything that you need to see with this app.

Who will enjoy DU Battery Saver

Anyone with battery life issues will enjoy this app. Not only does it have some great features, it has some beautiful animations and transitions. This gives it a very high end feel. it’s obvious that this app was professionally done.

What could use some work

In short, I came into this a skeptic and leave a believer. I have a 1st generation Moto G that I initially installed the app on. During the day and all day, I use the Moto G to stream audio. Usually by the time 6pm rolls around the battery is in the red. However, after installing the app I was able to have over 50% charge left at the same time. I was thoroughly impressed and would recommend the app to anyone.