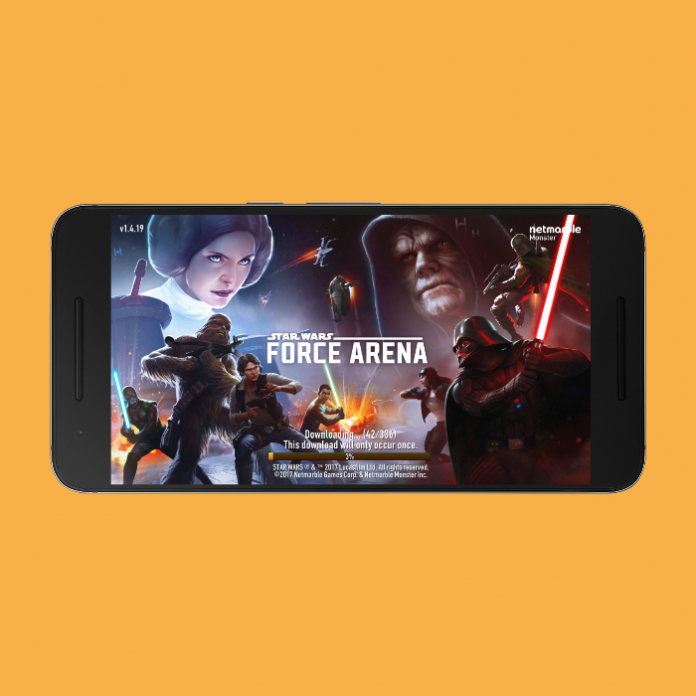 There’s a pleasing tendency these days of having high-profile franchises betting on mobile games. We’ve seen Pokémon, Mario, Marvel, and Fire Emblem all release top-quality games in the Play Store, which is something healthy for the community. Having several big-name clients under its belt, Netmarble Games got the chance of developing a Star Wars game. The result? Star Wars: Battle Arena, a game that mixes several genres into one full-fledged, enjoyable game.

This sequence takes you through basic controls, objectives and different elements that have been added to the game. The tutorial is kind of long and has you executing a lot of activities, so be sure you have at least 15 spare minutes to complete it.

It is kind of difficult to explain which genre this game falls under. On the Play Store, Netmarble Games decided to list it as a strategy game, which is an appropriate categorization, but it doesn’t capture the full picture.

First of all, this is an online-only game. If you try to start it without an Internet connection, you’re gonna have a bad time. Star Wars: Force Arena merges some MOBA elements with character improvement. Also, you have additional units that you can deploy through a card-based system. It is a very interesting mixture of genres and works pretty well.

But what is it all about? The game is simple: you need to destroy your opponent’s base. You control a character, called a hero, and can deploy troops throughout the field, such as stormtroopers, rebel troops, and even X-Wings. Each site is protected by three turrets, and destroying them gives your team one point. Since matches are time-constrained, the match can be decided by who gets more points if you fail to destroy your opponent’s base before the time expires.

Controls are pretty simple. Just as in any MOBA, you just need to tap on whatever you want to destroy, and your troops will do the rest. For deploying troops, tap on the corresponding card and, as long as you have energy, they will deploy automatically.

The game gets a whole new level of depth thanks to this card system since it provides such a large amount of strategies and customization. Do you prefer weaker troops that you can spawn quickly or prefer to have strong troops on your side at the cost of deploying them slower? What about a balance between both? You can do it whichever way you feel more comfortable with.

You get these cards through boosters, which you can get by winning matches, getting tickets, for free every four hours, or buying them directly with real money. Troops can also be leveled up by spending gold and collecting cards from the same type.

Let’s say you want to level up your Stormtroopers so that they actually hit something. You will need the appropriate amount of gold, and a certain number of Stormtrooper cards. Because the content of these boosters are random, leveling up troops can be a bit tricky. If you reach a point in which you want to upgrade a troop but you don’t have the required cards, you can also buy them separately with gold.

All of the matches are online unless you choose the training mode instead. The matches can be either 1 vs 1 or 2 vs 2 and both of them are done in real-time against other humans. You will find different strategies, characters, and movements used since you’re playing against humans, and not a computer opponent.

The 2 vs 2 matches are especially entertaining. You have to collaborate with another person in order to win, and the amount of troops and heroes wandering around the stage makes the matches a very unique experience.

If you want to collaborate with people you know and not with random humans, you can also join a guild. Members of the same guild can go into missions together and chat through the built-in chat group. You can also battle with members of the guild in order to hone your skills.

Thanks to the robust card system, the amount of replay value increases dramatically, since there’s a lot of stuff you can upgrade and improve. The fact that you can choose between the light and dark side means that there are elements to improve on both sides of the Force as well.

Battles are frantic and exciting thanks to the different strategies you can use and the time limit the game puts on you. The fact that you play against a human and not an AI-controlled character, coupled with a pairing system that works as it should, means that opponents are normally pretty equal in skill and level.

Unlike many other free-to-play games, you can totally play Star Wars: Force Arena without spending a dime. Sure, it requires patience and your progress will be slower, but it is completely doable. Also, in-app purchases are logically priced in the sense that you actually get a good value for your hard-earned money. It’s not like Pokémon Duel, for example, in which spending $5 yielded one token that could easily be useless to you.

Unfortunately, I believe that the game doesn’t explain fully everything that it should. The deck system is kind of complex and there’s not enough explanation of what some specific on-screen elements are, increasing the learning curve. With enough patience, you will figure it out by yourself, but it can feel a bit daunting at first.

With many games embracing the pixel/voxel art style, Star Wars: Force Arena focused instead on creating gorgeous-looking graphics that resemble as close as possible the masterpieces we see in the movies. The stages are all the same in structure but the scenery is different. Stages like Hoth and Tattooine will be immediately recognized and appreciated by any Star Wars fan.

Keep in mind, though, that in order to display these beautiful graphics, the game requires internal components that are able to handle it. For the first time since I’ve owned a Nomu S10, I saw bad performance in several sessions.

This is not a statement against the game, since what I’m doing is equivalent to trying to play Battlefield 4 on a Core Duo laptop, but rather a heads-up so that you know what to expect if you have a low-end phone. The graphics are first-class, the graphics processor needs to be too.

Music and sound effects are as top-notch as you would expect from a Star Wars game. The soundtrack sounds exactly like if it was extracted from a movie score, and the sound effects stay true to their origins. Blasters, lightsabers, and starships all have the characteristic sound we all love, immersing you in the experience.

Star Wars: Force Arena offers interesting gameplay through the mix of several elements and game mechanics. If you’ve played League of Legends or DOTA before, then you’ll feel right at home. Coupled with recognizable characters from the Star Wars world, superb graphics, and the sound we’ve grown accustomed to listen in the Star Wars universe, this game is a great example of how to use a well-known franchise and make a worthy game out of it.