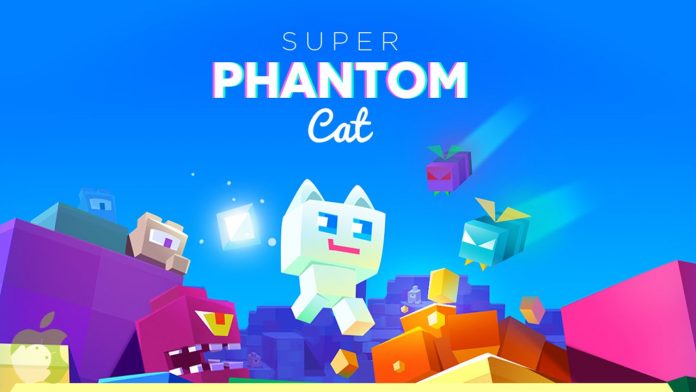 Super phantom cat is a Retro-platformer from Veewo games, joining a long list of games by the developer which can be seen here. It follows a cat (well, kinda. You’ll see) as you try to escape an alternate galaxy, and collecting various goods as you go. Download links, as well as a trailer, are available on their site.

Huh, Super Phantom Cat. As far as retro platformers go, You sure do play well. Game is simple – get to the end of the level, using left/right controls, a jump, and skills called “sprites” (more on them in a bit) It’s the usual drill. Of course, you can collect stars and coins, both for points. Coins can be replaced with data (More on that in a bit too) which does other things.

HOLD UP! What about Storage?

Do keep an eye on this one. At the time of writing, Super Phantom Cat (Or Super Cat, as its known as when installed) needs 132MB of space. Not horrifically big, but some people may have issues.

Now, Super Phantom Cat is built for the Pre-Marshmallow era, meaning that it does not support run-time permissions. If you are on Marshmallow or later (or know how to get into AppOps on older versions – or you use Xprivacy, you clever little rooters) You may want to disable a few things:

Contacts make sense since pre-marshmallow apps that don’t use the new SDK’s have to use said permission for Google Play Games sign-in. Telephone? No idea what’s going on there. Still turned contacts off because I can be a little bit of a hypochondriac like that.

Oh right! So, the story follows a cat (you) as you travel through the phantom world, trying to get home. On your way, you meet another cat who teaches you the ‘lay of the land,’ so to speak. This other cat rescues you then leaves you to do the tutorial before turning back up over the next few levels to teach you things. In fact…

I managed to grab tutorial footage! (Apologies for the volume bar at the start, and the sound. was not going to sacrifice quality for sound.)

After that, the game explains its ‘sprites.’ these plucky power-ups provide a variety of abilities like shooting, ground pounds, and short range teleporting.

As you may guess, sprites make your life much, much easier.

Anyhow, you may not like cats. Well, don’t worry, there are multiple characters to unlock! As the story progresses, you can start unlocking more and more characters. Some have unique bonuses, like extra health, or starting a level with an upgraded bullet sprite. the characters range from cats to birds and even people.

Honestly, my only issue is spelling. It’s not horrific, but when you see a typo, it can drive you mad. For example, if you die, you’ll randomly be given the chance of a free revive- in exchange for watching an advert when you ‘exist’ the game. Yes, it’s meant to be ‘exit.’ Speaking of adverts, you will get them when you die. However, log in 5 days in a row, and you get an ad-free experience. That offer is pretty good.

As far as in-app purchases go, Super Phantom Cat is not too bad. In fact, only 4 things can be brought:

And you don’t feel you need to actually buy any of them, other than the alternative worlds. There’s no there way to get them.

Overall, Super Phantom Cat is a rather good platformer that rewards people that play it with the lack of adverts, as well as well-placed hints to let you know if you missed something – or to explain things. Personally, I will keep this installed for a while yet – may get some new features for all I know.