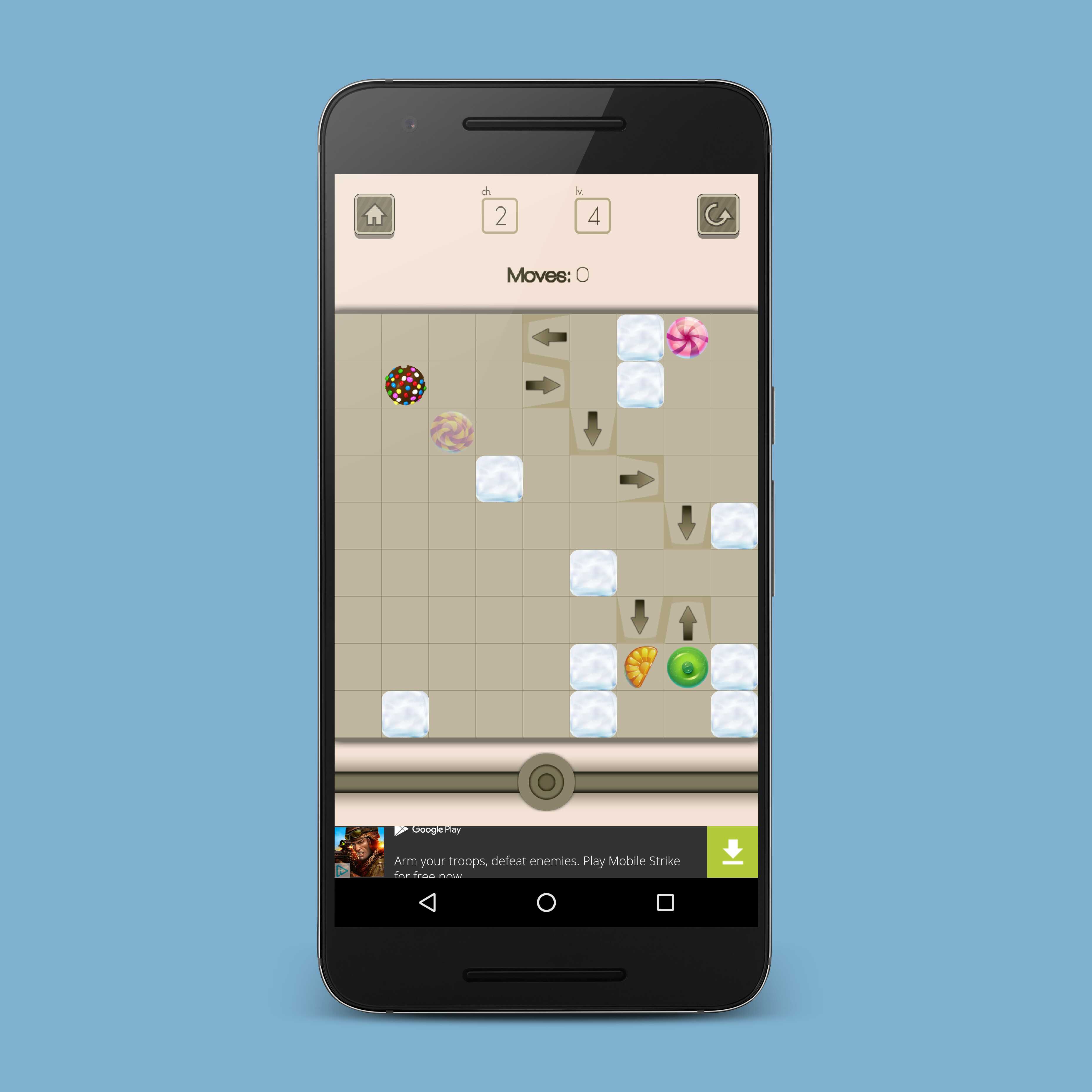 Move your piece of candy around, collecting other pieces of candy while jumping through all manner of hoops in the process.

Minimal setup, here. No Google Play support (Boo) means you can jump straight into the action.

This game is like many you’ve no doubt tried before, if you’ve played any sort of logic games in your life; when you move your piece around the board (in this case, a delicious-looking rainbow sprinkled doughnut thing), it must continue to move unless stopped (Hello, Newton’s First Law of Motion). So, here’s what your standard, early-game level looks like:

As you can see, there are other pieces of candy one must collect in order to advance to the next level. The faded piece of candy – a spiral lollipop, sans stick by all appearances – is the end point. There are white blocks (Ice? Snow?) as well, which stop the progress of your doughnut – use these to maneuver your doughnut around to collect the other pieces.

The concept sounds simple, and it is – but I assure you, it is not nearly as easy as you’d think. The process takes forethought and planning as many as five moves in advance in order to minimize the number of moves you take to finish the level – and earn stars, with which you unlock more levels. In addition to the white blocks, in later levels you’ll also run into direction specific blocks and portals, the former of which can only be entered in the direction indicated and the latter of which teleport your doughnut to another portal on the board.  These specialty blocks add another layer of difficulty to the game, often to the point of impossibility (for my brain, at least).

An aside: This game appears to have tried to piggy-back on Candy Crush’s successful aesthetic by designing their graphics around candy. I, personally disagree with this decision for a couple reasons: 1) It makes absolutely no logical sense (ironic, for a game revolving around logic) and 2) It feels cheap; like the developer didn’t have the faith in their game to stand on its own, and therefore decided imitation was the most sincerest form of profit. I could be wrong, here; maybe there’s some deep meaning I’m missing. But that’s what it looks like, based on appearances.

There are standard banner ads along the bottom and full-screen ads between levels and when you retry a level, which is obnoxious but not deal-breaking. If you like the game and don’t like the ads, spend $0.99 to remove them – and gain access to another Chapter of levels.

Sweet Candy: Logic Experiments is challenging, thought-provoking and adorable. It’s also unbearably hard at times, and seems to piggy-back off the success of a certain other candy-themed franchise.