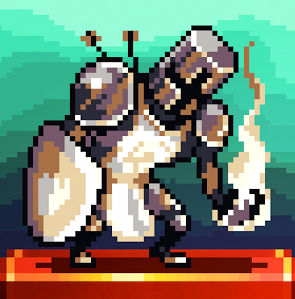 Yes, I know that I probably deserve to be burned at the stake for bringing up this cursed game from 2013, but by the end of this, you’ll see where I am coming from.

Alright, down to business. Tap Hero, the sole product offered by APPLICATTURA Michal Walaszczyk is offered on both Google Play and the Apple Store, supporting 4 1/2 star ratings on both. You play as a pixel knight, defending your castle by tapping to attack(and switching direction, more on that later)

Well, this is fun. as far as permissions go:

So, pretty permission light. But, oddly, the app has never requested these permissions.

It’s about… well, I’m not sure. As far as I can tell, you protect a castle from a variety of enemies. As in the aforementioned title, it is not frantic screen tapping that will get you through this game, but thought out, precision tapping. Tapping the screen essentially attacks the person behind your knight.

The enemies always spawn in alternating sides, making sense why the attack mechanic is the way it is. Don’t let that give you a false sense of security, missing gives you a huge stagger, meaning you are dead– The constant horde is not patient – but you can revive yourself with 100 coins, or an advert*.

Speaking of coins, you can use them to buy armor(in which a full set give you one hit immunity every run) as well as a better Sword and a Hammer. What these weapons do is unclear – try as I might, I couldn’t actually earn them (Money is hard to get hold of.) The developer does plan to add more weapons and armor in a later update.

*Wait, did you just say adverts?

Yup. At the end of a run, you may get an advert, usually a quick image you can just close. You can tap the end of run scroll (Left-center on your score) and watch a 30 second advert to get a buff, like a revive, money, or double money generation. I’ll admit, I do like the options, but I wish you could pick what you got, rather than choosing whether to deal with the option given.

If you hate the adverts, options are available, in our favourite form:

If you read my previous review on Dragonstone: Guilds & Heroes, you know I am not a fan of overpriced IAP’s. Luckily, Tap Hero passes the test here. You can either:

Which is certainly bearable. Little confused why GBP costs more than USD on the Ad-free mode, but not elsewhere, however, it could just be a slip-up by the developer, and its not an awful lot of money regardless.

Overall, pretty decent. The game’s soundtrack is a pretty good tune, and the 8 bit graphics do the game justice. I’m not a personal fan of any games that rely on reflexes and timing, but this has covered it with a rather fun twist to that sort of game – Actual ways to last longer than a few seconds.