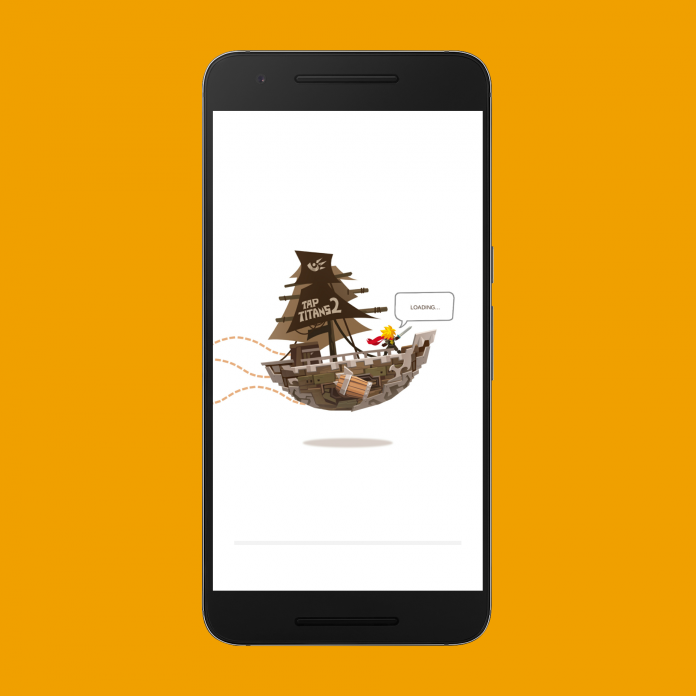 Even though there are a lot of games that rely on very simple controls (especially the enormous amount of “endless” games), more and more games are also implementing complex controls with complicated (but fun) gameplay. However, Tap Titans 2, by Game Hive Corporation, does the exact opposite: it gives you only one control through the whole game. However, the result is much more entertaining than you might think.

When you launch the game, it shows you a blonde guy with a black suit and a red scarf. This small guy is the character you will control for the rest of the game. Immediately after, you are allowed to change the name of him. Henceforth, he shall be known as Inuyasha (since that is how I named my character, because Inuyasha is a true sword master). You can also change your avatar, albeit the choices are limited to three and they aren’t that appealing.

You are thrown at the game immediately, with no tutorial or even a simple explanation of what to do. Since the name is “Tap Titans 2,” I figured that I should tap in order to do something. And I was right. The whole game has only one control, and it involves tapping anywhere on the screen. This will make Inuyasha slash his opponent once. Repeated tapping will kill your opponent, and a new one will show up.

In order to complete a stage, you need to kill nine monsters and one boss. Bossess are obviously more difficult and a timer will be associated with them. If you fail to kill the boss before this time, you will have to fight other monsters and then try again.

After clearing several stages, you will change the location where you are fighting, and naturally, monsters will get stronger. But, Inuyasha can also get stronger! This is because, when you kill a monster, it will yield coins that you can collect. These coins can be used to increase Inuyasha’s level, which will make him do more damage per slash.

Just as the anime character that inspired my hero’s name, Tap Titan 2’s main character can also have companions with him. You can hire their services using coins too, and they can also be leveled. Each level increase gets more expensive, but you also get more coins so it evens out.

There’s also pets that can accompany you in your trip, as well as equipment, artifacts, and special skills (all of which are unlocked after a certain level). Everything has some kind of upgrade associated with it, so the replay value is huge.

To add to the enjoyment, the game plays for you automatically when it is closed (but it doesn’t clear the bosses, so you actually don’t progress that much), so there’s a decent pile of coins awaiting for your arrival everytime you open the game.

A clan system has been added as well. You join a clan and you team up with its members in order to kill a huge monster with an insane amount of HP. It is important for every member to participate, because killing this massive monster is almost impossible without teamwork.

If you remember a game we reviewed some months ago called Groove Planet, then you might think that it is familiar. That is because it is. Tap Titans 2 replace buildings with heroes and notes with coins, but the concept is almost identical.

For some reason, I’ve found that this game has become very addictive. Even though the only thing you have to do is tap the screen, the amount of things available for upgrading and improving is astounding, and seeing how you progress little by little is rewarding. I’ve played for several days and I’m currently in stage 68 and it seems like I’m not even close to finishing the game because the amount of upgrades I have left is enormous.

Sure, it would be awesome if at least another way of controlling the characters was implemented (something that is partially mitigated by special skills), but at least the core gameplay is rock solid.

Finally a game that acknowledges design patterns other than voxel! Tap Titans 2 looks very nice. It is not the most detailed game around, but the sprites are colorful and good-looking. I mean, some monsters are extremely ugly but their ugliness is represented in a wonderful and elaborate way, if that makes sense. The scenary changes are nice, since it keeps you from looking at the same background every day. Some of them are more detailed than others but they’re a joy to look at.

The buttons in the lower part of the screen are used to change from upgrades to your main character, to heroes, to artifacts, etc. Sometimes, they seem a bit too small, so tapping them doesn’t register, which is a bit frustrating. Other than that, elements are normally very clear and look nice.

Music for the game stays the same always, so you might get a bit tired of it after some time. However, it is entertaining and goes in line with the game’s theme. Sound effects are nice, although some attacks have no SFX at all.

I can understand the decision behind this: since you will have several heroes in the screen all attacking at the same time, it could get really annoying very fast. However, it stills looks weird to have these nice-looking attacks being done by heroes and there’s absolutely no auditive feedback associated with them.

There are a few options you can play around with. The game is translated into 16 different languages, so you are probably covered in that aspect. You can also toggle sounds, music and notifications (they sometimes get a bit annoying, so I would recommend you deactivate them).

Other less useful stuff available includes creating an account (because syncing between devices doesn’t use Google Play Games), a link to a merchandise webpage, a calculator and a link to the Privacy Policy.

This is also the place where you can go to buy gems, through the “Bank” option. You can also rate the game here and contact support if you find some nasty bug that needs fixing.

Finally, an important element here is enabling rounding for leveling in bulk. That means that if you are on level 6, and you select to buy levels on increments of 10, you will first level to 10, then to 20, and onwards. If you disable rounding and are on level 6, you will increase your level to 16, then 26, and so on.

Even though it incorporates dead-simple controls that don’t seem entertaining, Tap Titans 2 manages to provide a lot of fun, thanks to a very well-thought upgrade system that brings huge replay value to the game. Nevertheless, it would be nice to see a bit of variation in the game, since there will be a moment in which tapping the screen the whole time will not cut it anymore. However, the game right now can provide a lot of fun and is ideal for playing in short bursts. If you are looking for a not too demanding game that provides lots of fun, then Tap Titans 2 is for you.

Download and install Tap Titans 2 from the Google Play Store.