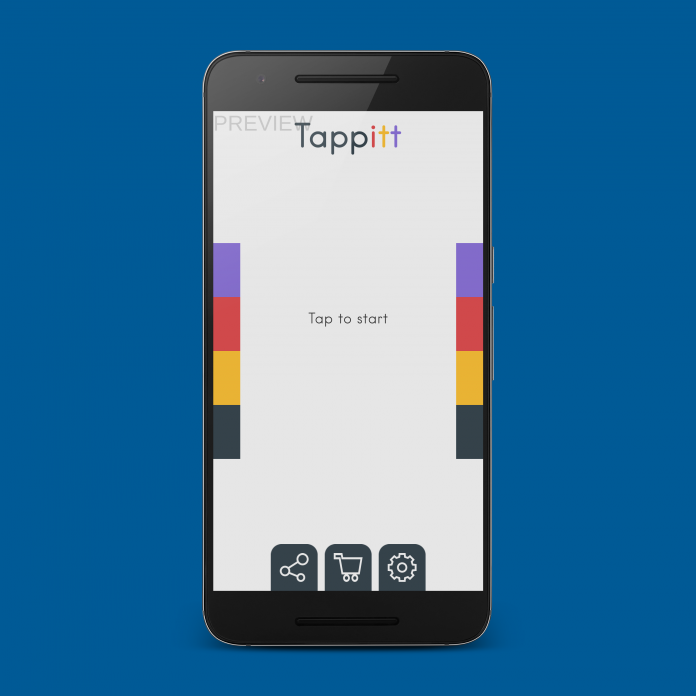 Sometimes games are really complex, with enormous worlds and massive storylines. Other times, a simple, yet fun mechanic can be enough to create an addictive game that can provide a lot of fun. Tappitt, just released at the beginning of April, falls into the second category, combining a fast-paced, challenging gameplay with several additions, such as multipliers and boosts, into a game that’s a worthwhile addition to your library.

The first time you play, the game will show you instructions on how to play. The premise is really simple: there are several circles, which contain red, yellow and purple circles. These colored orbs are constantly growing, and you must tap them before they reach the outer line. If they happen to outgrow your efforts, you’ll lose a life.

However, the lives system is rather peculiar. At the bottom, you’ll have a stack of red, yellow and purple bars. If you lose a life, a bar will be knocked out of the corresponding color’s pile. Running out of lives in any of the piles will end the game.

This is where things start to get interesting. There’s also a black circle that grows amazingly fast, and failing to banish it from your board will take a life of each color, which can be deadly if you are short on lives.

For each circle you burst, you get a point. The game lets you have a multiplier by touching four circles of the same color consecutively. This multiplier, fortunately, has no limit; so, if you play your cards correctly you can rack up an impressive amount of points.

After tapping circles for a while, you can get a boost. If you want to get a high score, boosts are absolutely essential because they increase your multiplier with each tap, regardless of the color. It also clears nearby circles, so not only it can help you increase your score, but also help you survive a difficult situation. You can speed up the time it gets to get a boost by bursting seven circles of the same color in a row. It’s not impossible to do it but it’s hard, particularly on smaller boards.

Also, the board itself changes its form after a while, keeping things interesting. These variations not only include the number of available circles but also from different shapes and even rotate to make things harder.

As you can see, there’s a lot of variations and different elements to keep you entertained. These situations can make for frantic, fast-paced games which can get very dramatic when you’re really short on lives and boosts.

Graphics are really simple and straightforward. Fortunately, the colored circles spice things up, because the rest of the elements maintain a mix of black, white, and different shades of gray. This absence of flashy graphics at least makes the game run smoothly- essential for a game that relies on quick actions.

Tappitt avoids the mistake made by several developers that include only one song for their main gameplay. The game chooses between several tunes so you won’t get bored of hearing the same song over and over again. These melodies grab their inspiration from 8-bit songs from games of yesteryear. It’s a curious choice since the game doesn’t seem to be themed around 8-bit, but the songs are catchy and upbeat.

The most noticeable sound effect comes from tapping each circle. When you start chaining your movements and trying to increase your multiplier, the sound will get more sharp, indicating that you’re getting closer to your goal. Since the game is really fast-paced and there’s no time to look the visual indicator, these sounds are really helpful for knowing if you’re close to raising that multiplier, or even better, if you’re close to chaining seven colors in a row.

Unfortunately, considering this is an initial release, some aspects have been left out in order to refine the core experience. There’s no Google Play Games integration, so there are none of the benefits that this service brings, such as leaderboards and achievements. We hope they’re added in the future since leaderboards would be ideal to increase the game’s replay value.

Also, the options screen is pretty barebones, with options to turn off sound effects, in-game music or to watch the tutorial again. I would like to see a way to lower the volume of sound effects instead of turning them off altogether because I think that they’re a bit loud, and lowering my phone’s volume will leave me almost unable to listen to the game’s excellent soundtrack. There’s also instructions on how to play the game, in case you access this screen before entering the tutorial.

A thing to note is that after each game, you’ll be shown a full-screen ad. Fortunately, there’s an in-app purchase to remove them, since it becomes really annoying after a while. Also, you have the option of buying boosts at a cheap price. Also, for some reason, the game is not available in Ecuador (my home country), so maybe the developer blocked access to the game in some regions. All of my tests were done on a preview release, which was virtually the same as the Play Store release.

For a game in its infancy, Tappitt manages to get a lot of things right. This game provides frantic, swift, and addictive gameplay, with several variations and alternatives to keep things interesting at all times. A seemingly forgiving lives system is balanced with black circles that are a latent peril at all times. The multiplier and boost process gives great rewards, but can be deadly if executed incorrectly. Smooth performance and great soundtrack round up a great game, which can only get better with future updates.