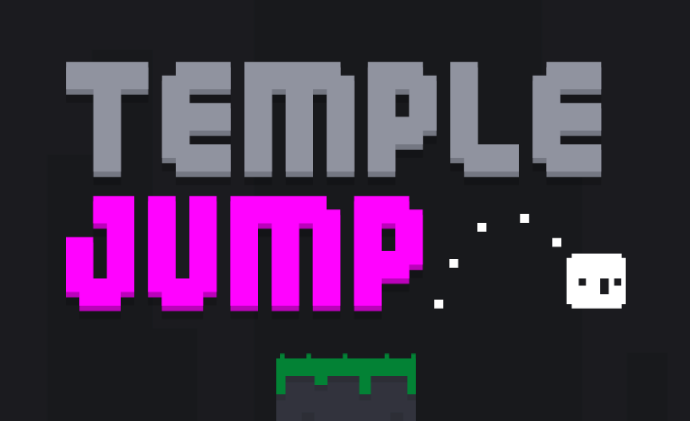 One-touch, high difficulty games have been insanely popular ever since a certain bird flapped between some famous green pipes. Flappy Bird paved the way for loads of tiny games designed to be very difficult and typically loaded with ads with the hopes of bringing in an insane amount of revenue. Some of these can actually be pretty great time wasters. Temple Jump, a simple-but-not-easy game about jumping on platforms to gather treasures, attempts to bring the fun with a bunch of unlockables and a challenge mode but doesn’t quite deliver a good fun/frustration ratio.

Seeing as how this is a one-touch game, the controls are rather simple. You hold the screen to make your character jump up and forward, and you release to come back down.Your character can jump just about halfway up your phone screen. Controls are responsive for the most part, but your character has weird movements. You rise slowly but will drop quickly, and it feels a little disjointed because of this. There have also been a few times when I thought I should have been able to jump but it may have been that it was already falling off a platform, so I won’t fault the controls for that. The sound is reminiscent of old Nintendo or similar retro games, with chiptune-y beeps and boops for jump sounds, traps, gem collections, etc. It fits the theme well.

Similar to the sound, this game uses retro graphics to give it a retro game feel. Everything looks like it came right out of the late 80’s and look good for what they are. The characters look appropriate, with the zombie having green discolored skin, the Nyan Cat looking like a Cat on a PopTart, and even the Flapps character (yes, there is a bird in the game called “Flapps”) looks like a close knock off of who it’s supposed to be.

Most of these characters have a jumping animation that can be pretty cute, such as the Flappy Bird flapping its wings (to no effect) and the “Retweet” Twitter bird leaving a hashtag trail. The temple is pretty aesthetically pleasing with torches lighting the way, bubbling lava below you, and shiny golden statues ready to drop and crush your treasure hunting dreams. While the retro style may have been overdone at this point, this game performs pretty well in this aspect.

Temple Jump has a steep learning curve, as most of these kinds of games do. Learning how your character moves is half the battle, as you have a slow, floaty ascension then you drop like a rock. It feels a little disjointed and makes it rather difficult to actually aim. Most of the time this is okay, since the platforms are typically twice as large as your character, and as long as you are touching the top you are generally okay. There are other platforms that are only as large as your character, and the awkward rising and fall of your jumps can make it rather difficult to land on, especially when the levels start adding in fireball traps, spinning spike blocks, falling pillars, and platforms that sink and try and tip you off. There are gems to collect, one on each platform, and these can be used to unlock new characters. These are cosmetic only, but a nice touch.

There are also two different modes with the regular play mode offering one long, randomly generated level. The challenge mode is set stages designed to be a bit more difficult, but with large gems at the end that give you at least 10 gems. I found the challenge mode to be more fun, because although they had a higher degree of difficulty, I was able to master the mechanics of the game. Additionally, I was able to get a decent amount of gems, making it easier to unlock a bunch of characters.

Here’s where my biggest gripe with this game comes in. I’ve got the controls down since I can handle challenge mode fairly well, and I’m no stranger to difficult games since I’ve had well over 150 on Flappy Bird and a 90% completion rate on Super Meat Boy.

The primary game mode with randomly generated worlds just doesn’t mesh well with the floaty controls. They work well when a level is specifically designed around them, but in the main game mode, they are just too unreliable to give you consistently good results. Frustrating games aren’t the problem because they can be fun. If you have a game that has tight controls that don’t hinder you from being precise, then you only have yourself to blame when you hit a trap, and those games can be fun.

It’s a personal challenge. Games where you have trouble landing on a platform because you have to calculate how fast your character will drop from the height you are at while accounting for the falling spikes next to you because your speed of ascension and your falling speed aren’t consistent, you aren’t fighting against yourself to get better, your fighting against game design and a game engine. That’s not challenging and fun, that just frustrating.

There are 12 challenge levels and 33 characters to unlock. The challenge levels will take a while to get through but you can practice and beat them. Once those are done you will probably have enough money to buy at least half the cast. Some of the later characters end up costing upwards of 1,500 gems so they will be out of reach for a while without an in-app purchase. Honestly, the level of frustration I had playing the main game had me quitting the minute I finished the challenge levels, and even those I had to walk away from for a while.

Look. I’m not new to the gaming community, whether it’s PC, console, or casual mobile games. I’ve played games designed to be extremely challenging and frustrating and have had a blast playing some of them. This is not the next Flappy Bird. This is a game with strange movements that requires precision and has a randomly generated world that is completely unforgiving of this fact. Temple Jump forgets that frustration does not equal fun when there’s a rather difficult learning curve. The unlockables aren’t enough to keep you around, as everything you buy is just a cosmetic change. Unless this game gets a serious tweak, it’s best you just move along.