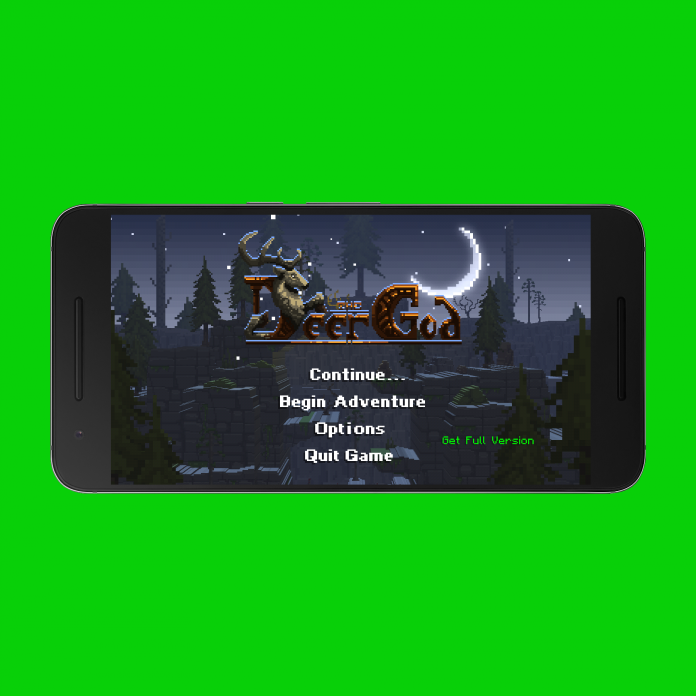 Have you ever wondered what it would be like to be an animal? Having to endure the animal food chain? Hunters coming for your precious flesh? Not encountering food in order to survive? The Deer God, by Crescent Moon Games, tries to put you in the body of a deer, and it is your job to survive through the perils and dangers of this beautiful species. Spoiler: it is harder than I thought, but not all of the difficulty comes from the risks themselves.

When launching this game for the first time, it asks for the Storage permission. It can be assumed that it is used in order to write the save file to your device. After this, a quite interesting story begins. You are a deer hunter, and, while, killing a deer, your body gets possessed by the Deer God, which transforms you into a deer and throws you into the wild as a punishment.

From then on, the game explains its very simple controls. To move, you place your finger in the left region of the screen and from then slide right or left. There are two buttons on the right: one for jumping (pressing it twice performs a double jump), and another one for attacking. To interact with other characters. That’s it, now you know how to play The Deer God.

As previously said, you control a deer in the nature, and encounter other deers, animals and even humans that are ready to kill you. The game shifts between night and day, and the background itself changes as well sometimes to avoid monotony. Other animals range from primates to bees to wolves.

The environment itself is harsh too. There are many spike pits scattered throughout the world, and the camera makes them hard to spot, but more on that later.

On top of that, you have humans with shotguns ready to fire at you. These enemies are, in my opinion, the hardest to avoid, and if you try to fight against them, it will almost always result in death. After all, the Deer God wanted you to go through the same difficult stuff a deer has to endure every day.

In order to survive, you need to eat food. Since deer are herbivores, you need to find fruits or plants to eat. If you fail to do so, your HP will go down. It normally regenerates by itself but only if you’ve eaten enough. On top of all the hazards you have to pay attention to, you also need to feed yourself in order to survive. It’s hard to be a deer.

There are animals that will attack you and some that won’t. If you confront and kill these aggressive animals, you will see blue particles sprouting from the corpse. It’s like the data a Digimon throws when you kill it. If you murder innocent animals that have done nothing to you, then some red material will come out of the body. This will determine if you lean towards the good or bad side of the Force… I mean, of whatever morale system this game has. I didn’t find any noticeable effect on gameplay, but it could surely become important afterwards.

I think that the premise for this game is very interesting, with all of the becoming-a-deer stuff. You can even get punished by the Deer God by “failing to fulfill your duty” and getting killed too much. It will trasform you into some kind of beaver that is slower and more difficult to control.

How do I know? Because I died a lot while playing this game. I died more than I would like to admit. The problem is that it wasn’t my fault the whole time. The camera, in my opinion, is atrocious at moments. It is very easy to find yourself in a situation in which you are not able to see what comes next. Should you make a big jump? Should you just make a small one because there’s a platform below? What if there’s a spike pit in front but I can’t see it?

Maybe this was done on purpose, but sometimes spotting your deer gets VERY hard, especially at night. This is because its color gets blended with the background easily. There’s a very dim glowing light that helps with this problem but it gets very serious sometimes. Animals and, to a lesser degree, food, can get hard to spot as well.

However, these frustrations are not dealbreakers. The big problem came once when I locked my phone with the game opened and then returned to it. Some moments later, I died (obviously), and when I came back, the game thought I was at the beginning. When it was teaching me how to double jump, it crashed. Then I opened the game again and my save file was completely lost.

Just like Watto after betting with Qui-Gon Jinn, I lost everything. Afterwards, the game failed to load portions of the map, or it loaded them very late. It also crashed extremely frequently. The solution for this problem was to delete the game’s data.

The game features pixeled graphics (surprise, surprise) in absolutely every element displayed. Unlike some other games that incorporate pixeled graphics, this graphic style is preserved throughout the game. Even the font is pixelated.

However, because of reasons explained above, sometimes it is hard to enjoy these graphics. Perhaps a better choice of colors could make it easier for the player, but, for now, the graphics hinder the enjoyment one can get from the game, especially at night.

There are very few sound effects in the game. None of them are particularly noteworthy but it is nice to have them there anyways. Most of the effects are heard when you fight against other animals or humans, and they do a decent job of adding some depth to these sequences.

The Deer God blends several interesting elements, such as an intriguing storyline and engaging mechanics, but unfortunately suffers from some annoyances that keep it from being a great game.

I will not pretend that every person in the world will experience the same progress-deleting bug I experienced, but this is the first time I’ve lost a save file in 20 years of gaming and it has been deeply frustrating. Besides, other stuff like making it very difficult to spot stuff in the night and camera woes make the game more frustrating than it should. However, with some small changes, this could be a very solid game, since the foundations are there.

Download and install The Deer God from the Google Play Store.