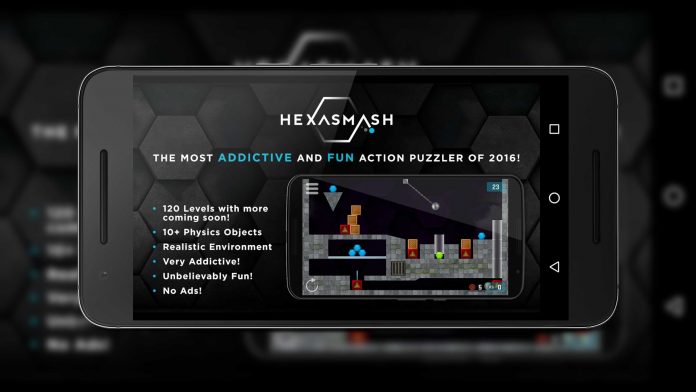 Note: Updated 05/03/2016 for accuracy – original review erroneously listed “Lack of Play Games support” as a negative. Hexasmash does in fact support both achievements and leaderboards through Google Play Games.

Hexasmash is an Angry-Birdsesque puzzle game – if instead of birds you have steel balls and instead of a slingshot you have a pendulum-style chain.

The standard paradigm for puzzlers is pretty set in stone these days – lots of levels, three gold stars, and some varying objective. Hexasmash is not your typical puzzle game. While the pendulum-swinging, gem-smashing, ball-bouncing game does have the former and the latter, there is no hint of the middle.

The goal of Hexasmash is to fling a ball, by means of a chain pendulum, into a number of colored gems. Destroying all the blue gems will move you on to the next level, while destroying one green gem in each set of stages will unlock a secret level. What makes Hexasmash different, however, is that when you’re going through these levels, there’s no rating system.

In Angry Birds, you have to fling as few birds as possible to achieve a three-star rating. In Hexasmash, the only goal is to get to the next stage – by any means possible. At first, I was a little annoyed by it; I thought I’d end up listing it as one of my Things I Didn’t Like. But the more levels I played, the more I found that I enjoyed the freedom. I could fling as many balls as I wanted in as many directions I wanted, and it wouldn’t affect my score. This led me to try tactics I normally wouldn’t, and actually fostered this weird emotion I don’t normally associate with puzzle games.

Don’t get me wrong, puzzle games can be immensely enjoyable; finishing a challenging level can be gratifying, for example – but fun? Not for me. Fun, for me, is throwing 18 steel balls across the room destroying every piece of terrain in the way before finally shattering that last gem. And Hexamsash is okay with that!

You can unlock additional levels via in-app purchase, in addition to the secret ones provided by the green gems. Hexasmash keeps track of all the gems and such that you’ve collected and are missing, so you never have to figure out where you’re missing things. In terms of gameplay variety, the changes in mechanics are sometimes so subtle that you don’t notice them – destroyable sandstone bricks, bouncy platforms, glass walls, and rotating bridges all make an appearance.

Note: I got a chance to play a bunch of new levels in an updated version of Hexasmash today, which added some new physics objects: Timebombs, Switch-Activated Doors, Bumpers, etc. The sheer variety of these added objects occasionally turn levels into living rube-goldberg machines – chain reactions that can end a level with a single ball. Really cool stuff. These new levels are again hidden behind a paywall or unlocked with green gems.

For as fun as the gameplay in Hexasmash is, the visuals are a bit lacking. The start button and the “Next Level” button have a very “Gingerbread” look to them, bringing back memories of Android versions past, and the overall graphic scheme of the game is well-designed, but not overly pretty. The sound design teeters between boring and piercing, with the sound of gems breaking being the latter and the lack of music, the former. Sound effects are very well done. Steel balls impact with a heavy-yet-hollow thump, and exploding barrels really hit you with a shockwave.

In all, Hexasmash is a really pleasant surprise for your average puzzle-gamer. It rings of Angry Birds and other such games, but brings its own dynamic and take on the genre to the table. I’d recommend giving it a download, if just to fling a few balls and have a good time. It may not be a good pickup for completionists or gamers that actively try to be as efficient as possible, but as a casual puzzle game that breaks modern convention, it’s a hidden gem.