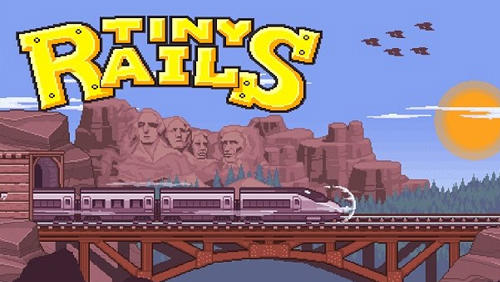 Sometimes you just need an escape. A trip away to somewhere far from where you are, even if just for a few minutes. Tiny Rails offers just that, with quick bursts of gameplay in a relaxing and charming atmosphere. I was genuinely surprised at how much content was packed in this game, but just because there’s a lot of content doesn’t mean a game is going to be good. Is it worth your time to take a ride on Tiny Rails? Let’s take a look.

You start the game off with an old train, and as you progress through you’ll discover new train cars and upgrades to improve your train and bring in income. At its core, this game is primarily about making deliveries or cargo and people. When you pull into a station, you will have the option to make purchases from the market if there’s anything available. As you browse the map you’ll see what items are needed at which stations, and making deliveries earns you some big bucks. Passengers are a little easier, as you drop people off and collect people at almost every station you come to. The downside to this is that putting in almost no effort means very low profits but for passive income, passengers can’t be beat.

The game also ties in a story about an evil corporation trying to take over the rails and your rag-tag band of train pioneers pulling together to create the best rail line ever. It does have a lot of cheezy dialogue and goofball characters, but each one helps you accomplish something, for example doubling profits or by keeping the tracks clear of debris. You have to use the premium currency of diamonds to activate these skills, but diamonds are surprising easy to come by through easy to reach achievements and watching videos. I’ve found myself with well over 400 diamonds, and with each skill only costing 5 diamonds for 24 hours of use, I’ll be set for a long time, not to mention I’m collecting more constantly.

Outside of setting up your train and planning your routes, there isn’t much else to do while your train is traveling. It can easily take 2-3 hours for your train to travel from station to station, but it will keep traveling while the app is closed, so you can take a few minutes to set things up, let it go, and come back later, so it’s a great game for playing on the go if you’ve only got a few minutes at a time to play.

Most of the game is navigating through menus to select what to buy, how to arrange your train, or selecting train helpers. Everything is responsive and works well. My only gripe, which has occurred many times for me, is that when you are placing new train cars you have to push a little “+” between the cars, and I usually end up hitting a car instead, selecting it and not placing the one I wanted. It’s a very minor complaint, but it comes up frequently.

The graphics are charmingly retro and pixelated but still high quality. Characters look highly detailed and the scenery is incredible, changing depending on what time of area you are in. I’ve seen forests, cities, country fields. There is a strong attention to detail. There is even a day and night cycle when your train will turn on lights and cabin cars will be lit up. All of this adds up to a beautiful game.

The music is peaceful and inviting, reminding me of Animal Crossing for those of you who are familiar with the Nintendo series. There train whistles and the sound of wheels racing down the tracks which continue to add to the charm of the game. The music tracks can get a little repetitive, but as a game that’s really only played for 5 minutes or so at a time, it’s nice, light, and relaxing for those short little breaks.

There is a lot to do in this game. I’m only at the end of chapter 2, and there are at least 5 more chapters ahead of me. With each chapter consisting of multiple stops across an entire country, and unlocking of European countries after that, this game will take you a considerable amount of time to see and do everything. However, the pacing of the game is just right so that you do not feel that you will never complete an assignment or that it will take you far too long to do any one mission. Everything is paced out with short, destination based missions in between longer missions so that you are constantly working towards a goal, but you also have complete freedom to send your train anywhere you want anytime you want.

Tiny Rails is a lot of fun with a load of content. There are constant missions to accomplish and as much or as little commitment from the player as desired. There are only about 5-10 minutes of gameplay at any one time, but it’s great if you only have a few minutes between classes or checking in when on a break from work. Add some pixel graphics and relaxing music and all together it’s a great package. This is one to pick up if you love games but don’t have the time to commit to serious gaming.