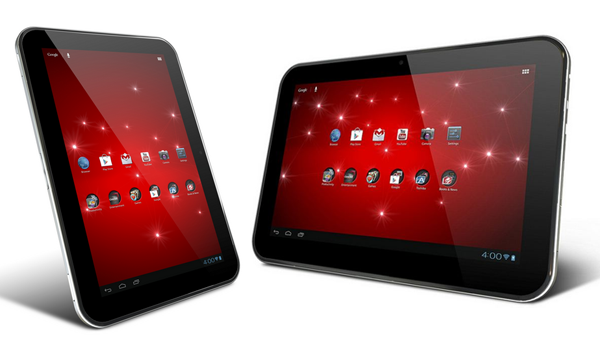 What we liked: The Toshiba Excite 13 is not only a great desktop companion but its NVIDIA Tegra 3 quad-core processor provides an immerse gaming experience.  Android 4.0 is a plus, and the front-facing camera is better than expected.  We also applaud Toshiba’s decision to include a full SD card slot.

Room for improvement: The Excite 13 is 13-inches so it’s not meant for much use outside of the living room or office.  Select videos, apps, and assorted content don’t take advantage of the screen size as well as we’d like.  The $649 sticker will turn a lot of people away.

Review at a glance: As powerful as any other tablet we’ve reviewed, the Excite 13 is a polarizing experience.  Perfect for use on the couch or on the desk, there is simply nothing portable here.  Works wonderful as a second screen experience in the office and in more permanent settings.  Toshiba is headed in the right direction with Android tablets, however this is one that won’t see mass adoption.

Whether for yourself or for a loved one, finding the right size for an Android tablet is not something that’s easy to do.  Even I regularly bounce back and forth between loving a 10-inch experience and really appreciating the portability of a 7-inch model.  Toss in those occasional 8.9-inch models and things get muddy pretty quickly.  That said, when Toshiba asked if I’d like to review a 13-inch Toshiba Excite 13, I jumped at the chance.  How would I find the experience?  Would it be cumbersome in a way that often sees me leaving it alone or would I try to take this thing everywhere I went?  As it turns out, it was both.  Consider that an analogy to how the consumer market might view the Toshiba Excite 13.

Make no mistakes about this tablet, it’s massive.  Compared to a 10-inch device, it’s night and day.  Compared to a 7-inch model?  It’s laughable.  Days into use, I’m torn on whether I feel the Toshiba Excite 13 falls under “bigger is better” umbrella or if it’s “too much of a good thing…” For that very reason, I cannot imagine spending $650 (or more) on the tablet.  Priced lower, I would not have a tough time recommending the device for people who like their tablet semi-stationary.

I’ll not bore you with benchmarks or how it performs as compared to other tablets, but will recap a bit of the key hardware.  Specs include 1GB RAM, 32GB storage, a 5-megapixel rear camera, front-facing camera, headphone jack, microHDMI, and microUSB.  Weighing 2.2 pounds, the tablet measures 13.5 x 8.4 x 0.4 inches.

I initially subscribed to the notion of “we love 13-inch notebooks, so why not tablets” but now understand why we don’t.  Netbooks and notebooks are designed to sit on your lap, letting you type comfortably.  Tablets, on the other hand, require that you give one hand to holding the device and using the other to peck away.  And while the Excite 13 offers a nearly full-sized keyboard experience, I could not help but worry that the tablet was going to slide off my legs.  Elevating a bit to keep this from happening, the tablet slides down to the waistline and makes for a wonky experience.

What works well and what doesn’t?

It took me all of one day to figure how to best use the Excite 13, and that was setting it on a tablet stand and putting it next to my office monitor.  Using a Bluetooth keyboard, the 13.3-inch tablet felt wonderful on apps like Gmail, Twitter, Hoostuite, and Chrome.  There’s nothing quite as comfortable as reading with Pocket, Kindle, or Nook apps and IMDb was a real pleasure as a couch companion.  Netflix?  This streaming movie and TV service, as well as YouTube and Google Play Movies, really shines on the Excite 13.

Thanks to the NVIDIA Tegra 3 processor, games run without a hitch and graphics shine on the large display.  Unfortunately, many of the games we’ve come to love on smartphones and smaller tablets simply didn’t feel as fun on the 13.3-inch screen.   Don’t get me wrong, Angry Birds was flawless, but games that require button pressing and D-pad stuff…?  No thanks.   That said, a Bluetooth gaming controller changes everything again as the tablet becomes a monitor.

The more I use tablets, the less I find myself caring about rear cameras.  I often find it silly to see someone record video or take pictures with anything bigger than 7-inches and this only amplified my feelings.  I would feel like an idiot holding this thing up in a crowd or at a little league game and suspect many others would.  On the other hand, front facing cameras are becoming increasingly more important and useful.  The Toshiba Excite 13 provides a great experience here and apps like Google+ and Skype work exceptionally well.

You know how, every once in while, you encounter apps that don’t scale well on larger tablets?  The Toshiba Excite 13 shines a bright light on these titles and really makes these select apps look terrible.  The same goes for the occasional video which doesn’t fit all that nice in the 1600X900 resolution.

Battery life for the tablet is rather decent, and is promised to be 13 hours of usage.  Given that we kept ours next to the desk and on a stand, we charged ours on a semi-regular basis.  Those days where we took the tablet out and about for extended periods, we found the Excite 13 lasted all day long, despite its massive screen.

Some of the additional things I enjoyed with the Toshiba Excite 13 include the screen orientation lock button, micro-HDMI port, and SD card slot.  Toshiba’s Audio Enhancement feature lets users access SRS sound settings and the  Ambient Noise Equalizer adjusts the volume based on the amount of noise in your vicinity.  Likewise, the speakers were loud and clear, something I fully expected given the amount of space available in the design.

Toshiba does install its own suite of applications, many of which aren’t all that bad.  Seasoned Android users might have their own favorites, however the preloaded selection is a decent mix of fun and function.

Weighing a shade over 2 pounds, it’s easy to mistake the tablet as initially feeling light.  Use it for more than ten minutes and it becomes obvious that it’s not.  Held in landscape mode, it’s nothing you want to do with one hand.  Turned on its end and held in portrait mode, I felt like Moses with one of his famed tablets.

Summarily, if you ultimately consider a Toshiba Excite 13 for yourself, you will need to also factor in a tablet stand and Bluetooth keyboard.  These two accessories are almost a necessity if you want to use it in a productive manner.  Starting at roughly $650 for the tablet alone, you could find yourself spending another $100 or more for some essentials.  I’m a fan of the Toshiba hardware and their tablets as a whole, but recommendation of the Excite 13 is a case-by-case decision.