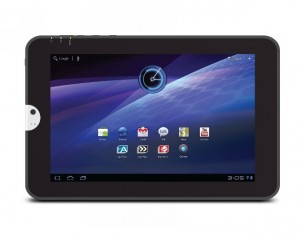 At first blush, the Toshiba Thrive could be mistaken for a “rugged” Android tablet.  Given the thick design and ridged back side, it’s easy to see why someone might skip on by this device and on to more sleek and sophisticated-looking devices.  You know, devices from bigger names such as Motorola, HTC, and Samsung.  After spending the last few weeks using the Thrive on a regular basis, I’ve really come to appreciate the tablet for its performance and price.  Even to the point of overlooking its not-so-pretty design.

One of the biggest obstacles Toshiba faces with the Thrive is that the company has no Android presence to help the company gain a foothold.  They have no track record of Android phones or tablets to speak of and nothing reputable to bring to the table.  At $429 the 16GB version is  roughly $70 less than its Samsung Galaxy Tab 10.1 counterpart.  Is it worth paying the extra money for Samsung’s 10-inch tablet?  That depends on what’s most important to you.  Do you want a functional tablet with great hardware and function?  Or do you need to look cool and hip with the slimmest, sexiest tablet on the market? 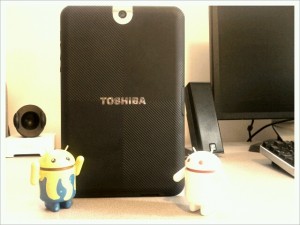 Samsung has a history with Android, even if it’s not the best.  We know from experience that the company has solid Android hardware and a decent record of providing software updates.  Toshiba may have the best intentions with the Thrive and future Android tablets but this is a gamble that some may not be willing to take.  On a positive note, Toshiba did do a good job of acknowledging a wake/sleep issue for the Thrive and issued a software patch in somewhat timely manner.  Another good sign was releasing the tablet with Android 3.1 not long after it was made available.  If they can continue to listen to their users and provide consistent updates, then Toshiba could earn valuable Android street cred.  Unfortunately we could be six months away from Toshiba establishing a solid reputation either way.

On paper, the Thrive is as good as its competition, if not better.  The full-sized USB, HDMI, and SD card slots give it an edge over the XOOM and Galaxy Tab 10.1.  Tossing in a 30-pin dock connector and mini-USB port and Toshiba leaves the door wide open for expanded functionality and added benefit.  The 3.1 release of Honeycomb allows for the Android Open Accessory protocol so I imagine there should be problems supporting hardware from outside sources.

The 5-megapixel camera is good, not great, and the speakers are as loud and clear as we’d like them to be.  It’s very easy to go “tinny” with speakers mobile devices and Thrive is occasionally guilty of sometimes shrill audio.  Generally speaking, however, we were impressed with sound quality of the tablet.  Getting back to the camera, the pictures and 720p video are impressive providing you have the right lighting.  Low-light scenarios presented a challenge at times, making for a grainy experience, especially in video.  This is not a necessarily a deal-breaker for me as, for whatever reasons, I typically don’t use the cameras on my tablets. I tend to prefer to use the camera on my phone instead as it’s more convenient and substantially more portable. 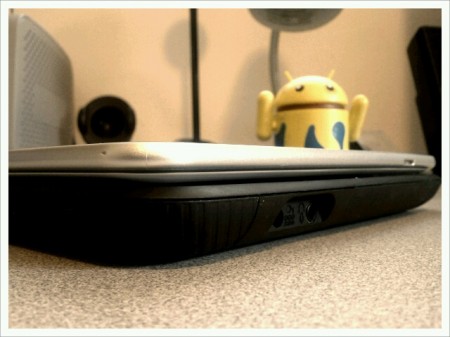 As thick and as heavy as the Thrive is, it’s still portable enough to toss in a bag or backpack for a daily commute or long-term trip.  The “problem” of being heavier than its competition is really only obvious when you compare it directly to another tablet.  I handed it to a couple of people who have yet to spend time with any tablet just to hear what their initial reaction was.  Nearly every single time, the remark was something to the effect of how light it was.  Turning the Thrive on its side, these test subjects would generally remark at how nice it was to see the ports.  “So I can toss my SD card in here and review my photos and media?”  I suspect that this tablet gets the same reaction in stores, just as long as it’s not sitting too close to a slimmer, sexier tablet.

Personal Takeaways
This is the first Android tablet that I have used where I found myself holding it in portrait mode as opposed to landscape.  Thanks to the placement of the rear/front-facing cameras and the Toshiba branding on back, the Thrive only feels right in this orientation.  This is not a problem for those of you who have not spent much time with another tablet.  However, I continually found myself putting my right hand directly over the camera ports as I watched video or played games in landscape mode.
If you’ve asked around or checked out other reviews of the Thrive then you’ve probably seen references to the notification lights.  Yes, the three blinking lights are obtrusive.  In fact, they were the first thing I wanted to disable on the device after only a few minutes of usage.  I can accept one for charging and/or notifications of emails and messages.  After a few years of Android phones, I have to expect that I have some form of indicator.  But to have three separate lights on or blinking… on the front side of the device… it gets annoying.  Moving these to the side of the tablet would be a good move, but a better one would be to consolidate.  I’ll deal with one light wherever you want to put it.

Toshiba does throw in a number of applications and games but they’re not as bad as one might expect.  Some are definitely a value and would come in handy for the business-minded user, while others come across as generic.  LogMeIn Ignition, Quickoffice, and Kaspersky Tablet Security might save you upwards of $100 should go out and hunt them down yourself.  A handful of additional titles (Angry Birds, The New York Times, and NFS Shift) are popular downloads whereas some feel crammed in for no good measure.  I really enjoyed the File Manager and PrinterShare apps and look forward to seeing more implementation along these lines.  The Toshiba store is virtually useless for someone who is a seasoned Android veteran however it’s a decent way to hold the hands of a new Android user.

Is the Thrive thick and ugly? When you compare it to the current crop of tablets on the market, the answer is yes.  However, on its own, the Thrive is no uglier (or heavier) to me than the first time I held a XOOM in my hands.  Toshiba has become a reputable brand in the laptop space and I anticipate they’ll become a solid player in the Android tablet game.  Had the Thrive shown up just a few months earlier, I imagine half the arguments against the tablet would be moot.  On the other hand, another few months from now the Thrive will look terribly clunky when compared to devices like the Sony S1 and S2 or HTC Puccini.If Samsung can cut the Galaxy Tab 10.1 thickness in half in just a matter of weeks, I am optimistic that Toshiba can do the same for the next iteration of the Thrive. However, this is not meant to suggest that you skip the current version.  The price alone is reason to give it extra consideration today.  Buy it on a bargain – it’s more than worth the price if you can get it for $50 to $100 less than the normal asking price. If you stumble across one of these on eBay or Amazon with a decent-sized discount then don’t think twice about it.
Note: Select outbound links may include affiliate tracking codes and AndroidGuys may receive compensation for purchases. Read our policy.

Dive into the world of Qualcomm's Snapdragon mobile processors. Find out the main differences in each of them and why they really matter.

Dive into the world of Qualcomm's Snapdragon mobile processors. Find out the main differences in each of them and why they really matter.