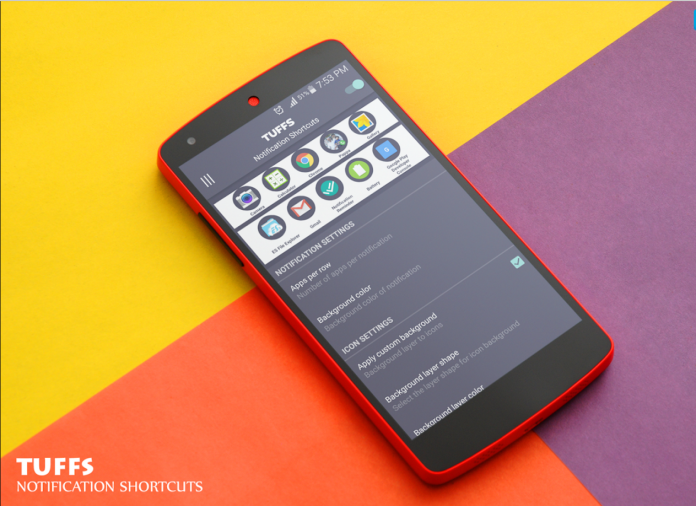 TUFFS is a simple app that, in essence, creates a constant notification in your shade, with a number of configurable “slots” for quick access to apps or shortcuts.

When you install TUFFS, even if you don’t immediately configure it, it still shows up in your notification shade. It’s kind of obnoxious – though it definitely gives you an incentive to configure it ASAP.

Once you’re in the app, it presents you with the main menu screen, shown here, complete with an utterly adorable menu animation that I personally think should be used more often.

Now, there’s a bunch of different options here, but there are really just two that matter – Home, and Settings (and even then, the two could easily be combined). The various options of the app are separated arbitrarily between the two, so you’ll have to do a little exploring before you figure out which options are where.

The free version will land you most of the options, including a single row of up to eight configurable and customizable shortcuts; the paid upgrade – $0.99 – gets you two rows.

The app comes pre-loaded with some common themes among smartphone UIs, in order to better match your TUFFS shortcuts to your Quick Settings. It also includes some custom options for frames and background colors as well as icon pack support, if you fancy creating your own theme. The color picker is also really, really fancy-looking; check it out to the left.

The end result is something that looks a little like the image to the left; up to two rows of apps or shortcuts that live in your Notification Shade and Lockscreen for easy access. While TUFFS isn’t the most polished or well-organized app, it does what it sets out to do effectively. The interface is a bit cluttered, but easy; just tap on the shortcut you want to modify, pick the replacement, and you’re done.

It should be noted that I got a couple force-closes while using the app, and it doesn’t reliably ‘stick’ to the Quick Settings like it should – notice that my Kings notification ended up on top of it – but overall it performs well.

TUFFS is available on the Google Play Store for free, with an option unlock all features ($0.99) or unlock and tip the developers ($1.49).