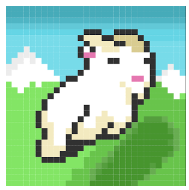 Flappy Bird paved the way for one-tap control games. It’s simplistic, fast paced gameplay kept people coming back for more with goals that were obtainable yet difficult enough to that you had to keep trying before you could succeed. Taking it’s cues from Flappy Bird, Two Mountains One Goat is a game with a very similar style, but will it’s tweaked gameplay hold it’s own? Let’s take a look. 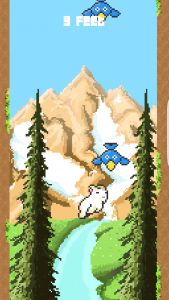 Getting started with the game is quick an easy. Connect to Google Play Games if you want Achievements and Leaderboard functionality, then hit the big start button. Your goat starts off at the bottom of screen with two mountain walls going up both sides of the screen. When you tap, your goat jumps from the right wall to the left or vice versa, gaining altitude with each leap. Your first few jumps are pretty straight forward. Then the birds start.

Oh, the birds. These birds have it in for your poor goat. Some hover in the middle of the screen and might trip you up if you’re not focused, but can usually be avoided. Some move slowly back and forth and again can be pretty easily maneuvered around. Then there are some that move so quick it seems nearly impossible to make it past.

It’s at this point that these games get fun if you’re up for the challenge. There’s no greater feeling than when you successfully time it and make it past that one bird that moves at lightning speed… but that high is quickly squashed when the next bird is equally as fast and you jump right into it. It’s that small victory of making it past your nemesis bird that drives you to hit play again and try to beat you score because that fourth bird isn’t going to stand in your way again!

Similar to games like Flappy Bird, Two Mountains has a retro, pixel look to it which doesn’t get old as you watch your cute little goat leap from wall to wall or plummet to his death for the hundredth time. The beautiful mountain scenery helps make this game even prettier. Animations are smooth and beautifully simplistic.

The game is a lot fun. If you’re someone who’s driven by trying to beat your best score, then you may love this game for a long time. Likewise, if you can get a group of friends to download it, then competing with them on the leaderboard may provide some fun too. Just on its own, however, once you’ve played about 10 rounds, it does start to get stale. There is only one game mode and nothing to unlock apart from achievement. I find myself opening it up to tap a few quick rounds while waiting around at the bus stop or if I’m in a long line at a store, so it’s a great time waster, but it lacks depth beyond this.

Two Mountains One Goat is a pretty solid game, with its cute pixel graphics, easy one-tap controls, and fast gameplay. It’s best played in short burst or if you have a few buddies who you can compete against on the leaderboards. If you’re someone who likes to play a game for a minute or two just to pass time throughout your day and you like games that will challenge your muscle memory like Flappy Bird, then Two Mountains One Goat is for you.