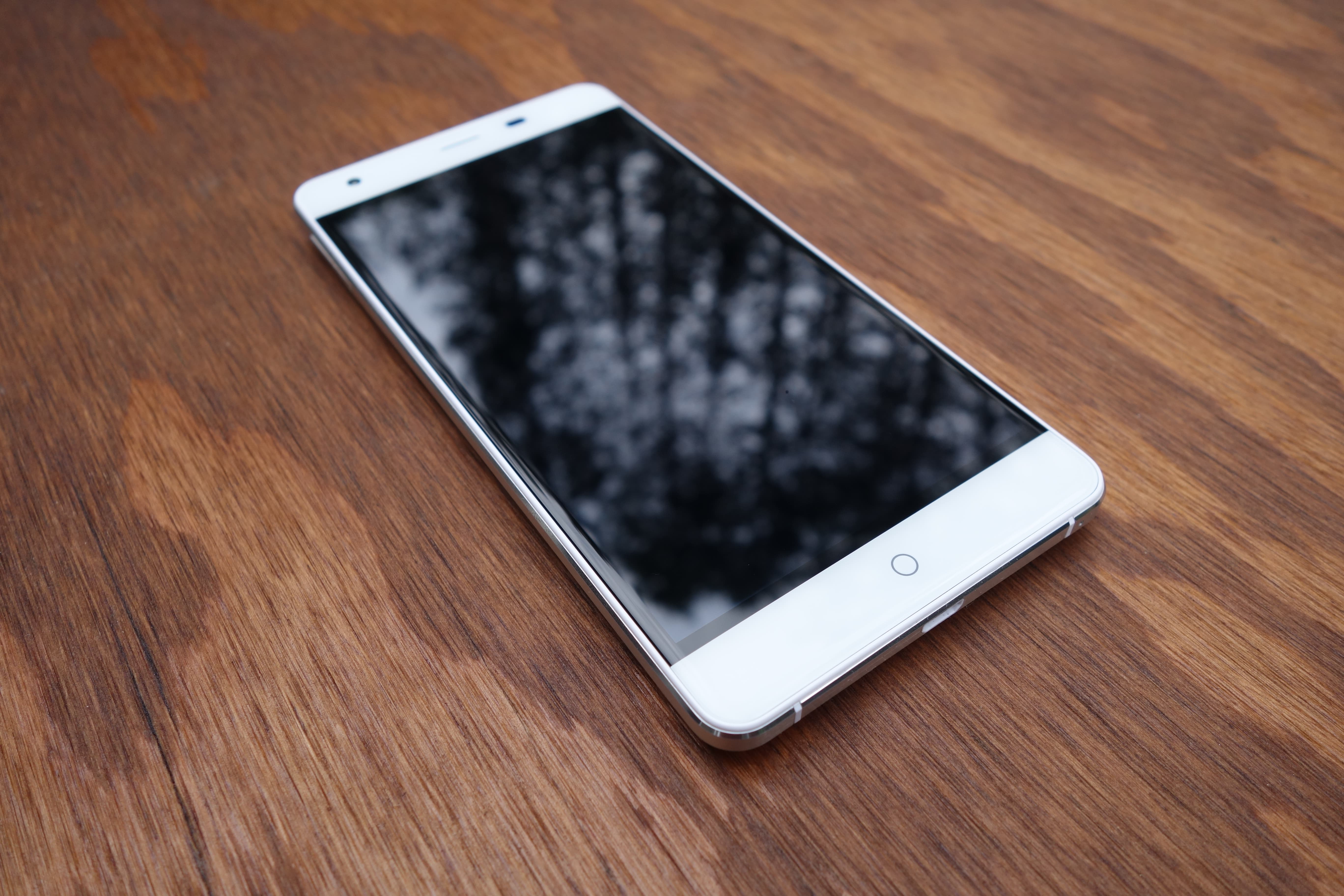 The big names in smartphones are always apprehensive about packing large batteries in their flagships. That’s annoying to a lot of people, because battery life is a crucial factor. Manufacturers think if their smartphones aren’t razor thin then people won’t want them, but I’ll argue all day that they’re wrong.

This leaves the opportunity open for lesser known brands to step in and do the right thing. Let me introduce the Ulefone Power. 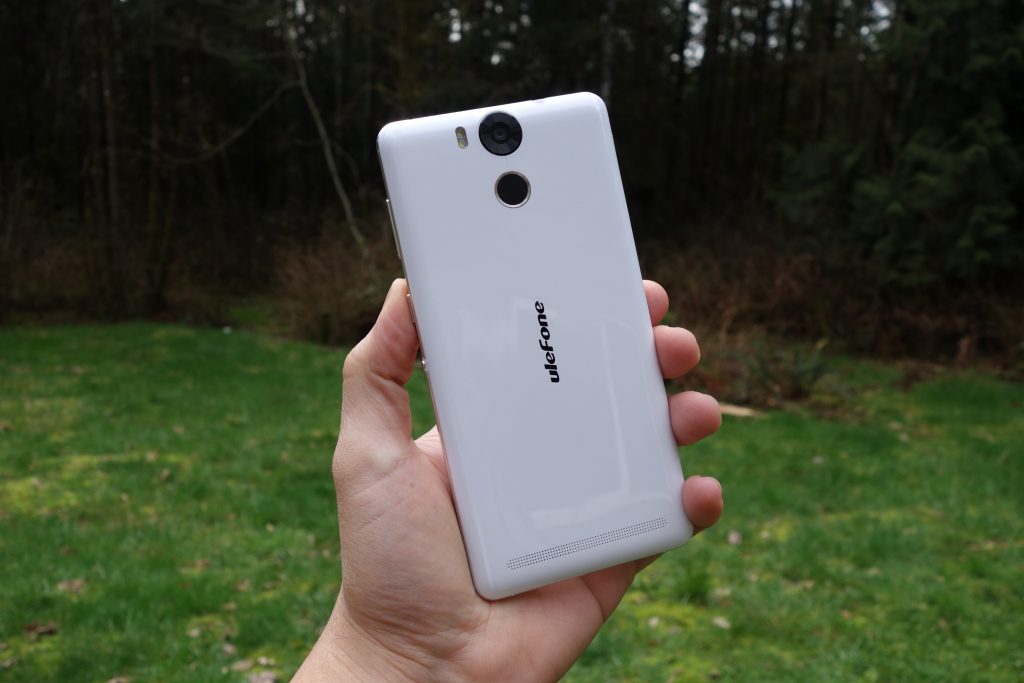 Ulefone is a Chinese smartphone manufacturer that has been offering great bang-for-the-buck Android phones. We were given a chance to review this battery monster (the Power has a whopping 6,050mAh battery), thanks to our friends at GearBest. Let’s check out if it’s worth your hard-earned bucks. You can imagine that a phone that puts so much emphasis on practicality won’t necessarily be the most attractive. This is certainly the case with the Power. It’s a thick phone (9.5mm) and the design won’t necessarily turn heads. But that’s okay, at least your phone will keep going like the Energizer Bunny when your buddies are freaking out about their dying phones.

Ulefone does add some modern design cues, though. There’s a metal perimeter all around the sides (with shiny chamfers) and 2.5D glass on the front that curves into it. 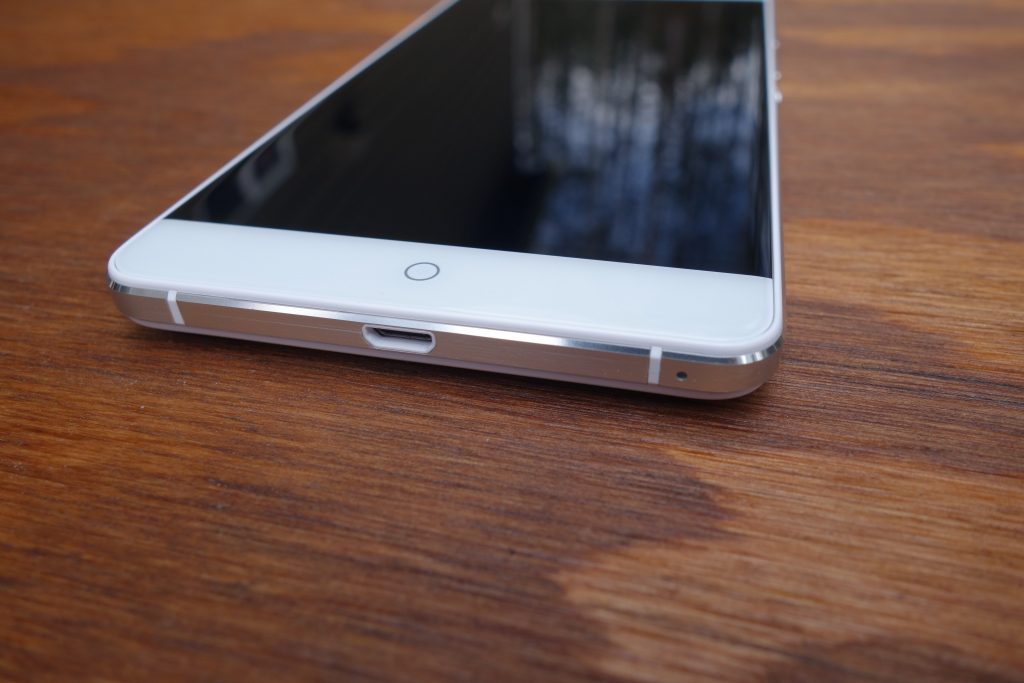 The power and volume rocker are both on the right side and are also metal. You’ll find that Ulefone generously included a camera shortcut/shutter button. But that’s not all. On the top there’s an IR blaster, something we don’t see in many phones anymore. 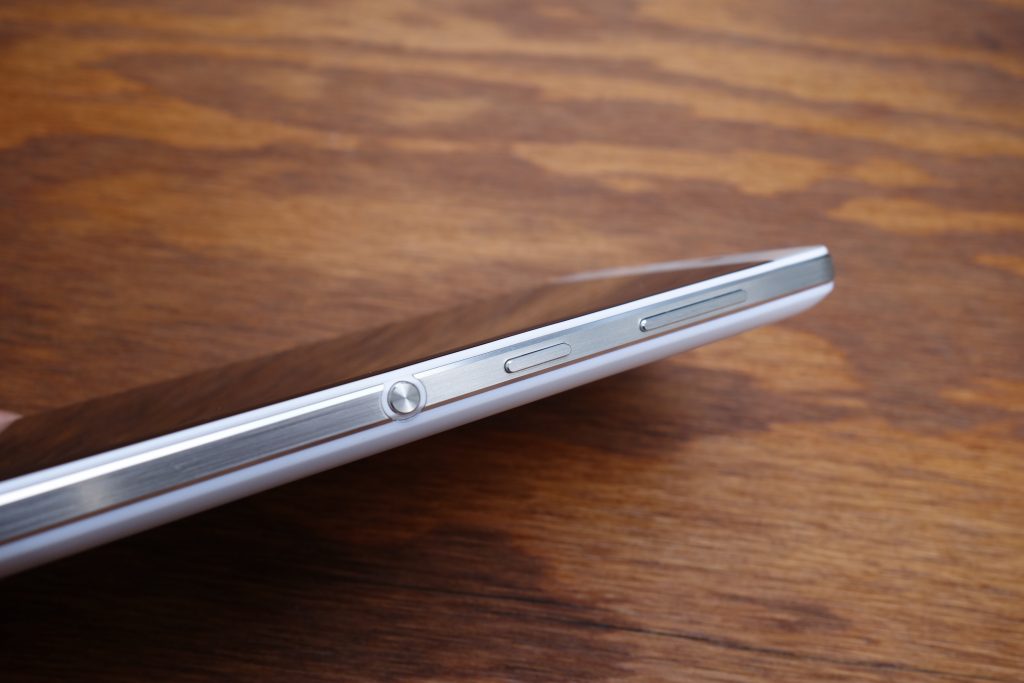 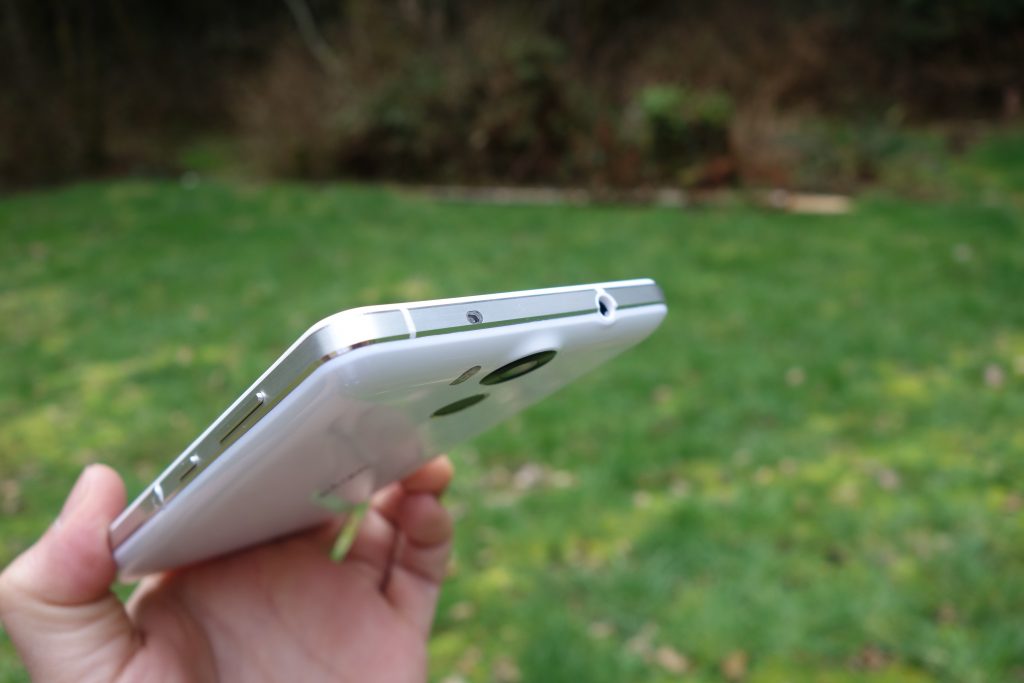 The back cover is my least favorite part of the Power. It’s this glossy plastic that feels cheap. It’s very similar to the verykool Maverick SL5550 that I’ve reviewed, but at least that phone let you remove the back cover. The Power’s back isn’t removable, so there’s less excuse for the material decision. It does have this nice weave pattern etched into it, but it’s really subtle. Fortunately, Ulefone offers a variant with a wood back. If you don’t fancy wood, then plastic is your only other choice, in either Silver White or Dark Blue.

The Power is a phablet-sized phone, with a display at 5.5″. The size and girth make it feel substantial in the hand (in a good way). You have plenty to grip unto. But a repercussion of the extra large battery is weight: 190g. That’s not too unreasonable (the LG V10 is 192g), but worth noting.

Lastly, the Ulefone also keeps up with the times with a fingerprint scanner. It’s on the back, directly under the camera module. I wouldn’t say that this is the best placement; it’s a reach to get to on a phone this size (sometimes causing misreads). Moving downward, you’ll see the Ulefone branding and then a long horizontal speaker grill.

Let’s take a quick look at the Power’s specs: 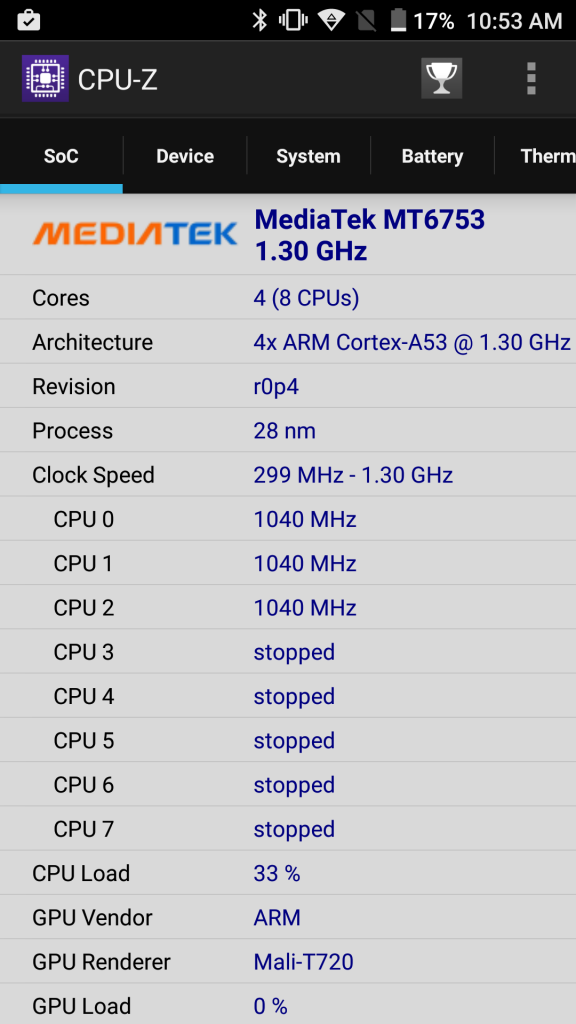 It happens to be that many Chinese smartphone OEMs feel the need to include a custom UI on top of Android. Sometimes this slows performance down, depending on how heavy the interface is. Fortunately, the Power was saved from this. It does have a custom UI, but it’s light. We’ll cover the details of the software towards the end, but what’s important right now is that this phone is super responsive.

Everything in regard to navigation just flies, and feels like the processor is just asking for more. The custom UI kills a lot of the animations/transitions in Material Design (sad face), but in turn, that makes every action super snappy. I’m glad that Ulefone didn’t skimp on the memory, I think it helps greatly. 3GB of RAM is a fantastic value for a $169 smartphone.

The fingerprint scanner works well enough. It’s not the quickest at unlocking, but I was blown away that you don’t have to press the power button first. The phone wakes and unlocks with just your finger placement. Kudos, Ulefone. The Power’s display hits that sweet-spot size of 5.5″. Historically, affordable/budget phones have had pretty terrible displays, but that’s becoming a thing of the past. I was really satisfied with the quality of the Power’s IPS LCD screen. The colors are decent, viewing angles are great, and the 1080P resolution has plenty of pixels.

The panel can also get very bright. I’m typically fine with it around 50-75% brightness. Outdoors, I can see the screen clearly at max brightness. 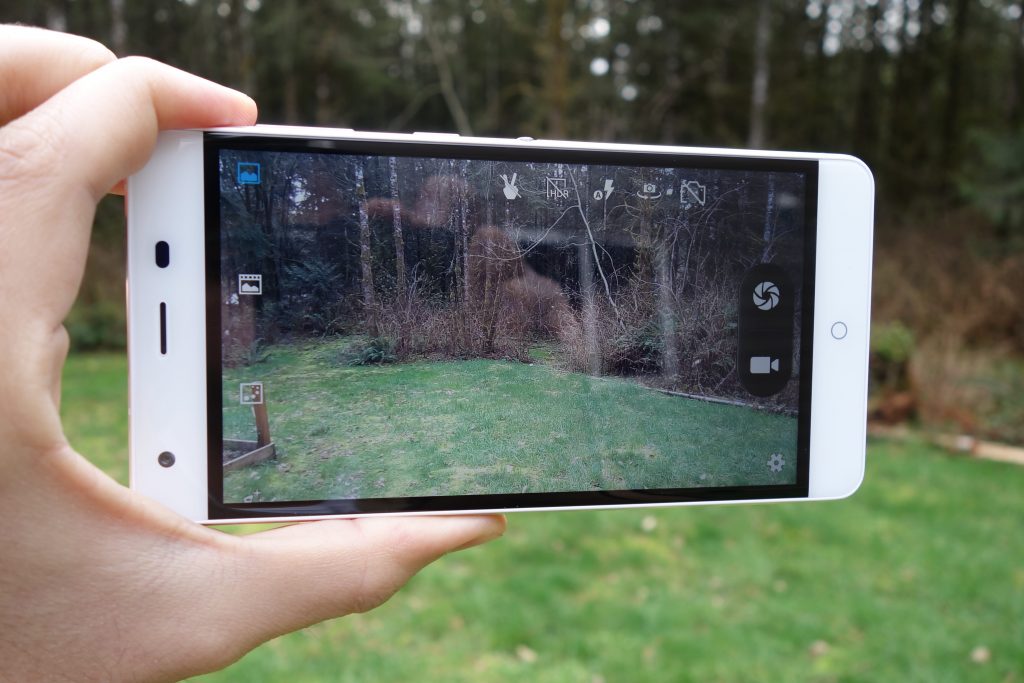 A pain-point for me whenever I test out lower priced smartphones is the camera performance. This is the Achilles Heel of the budget smartphone world, and I believe if it weren’t so, then they would seriously give top-end smartphone a run for their money.

Unfortunately, the Power isn’t absent of this sentiment. The quality of the images and the auto-focus speed are nothing to write home about. It’s not the worst I’ve seen, but it’s no where close to where flagships are these days. When I saw the spec sheet, I was hopeful. It’s a 13MP Sony-made sensor, with a f/1.8 aperture lens (in comparison, the lens of the Galaxy S7 is f/1.7). So it sounds like it should be a lot better. 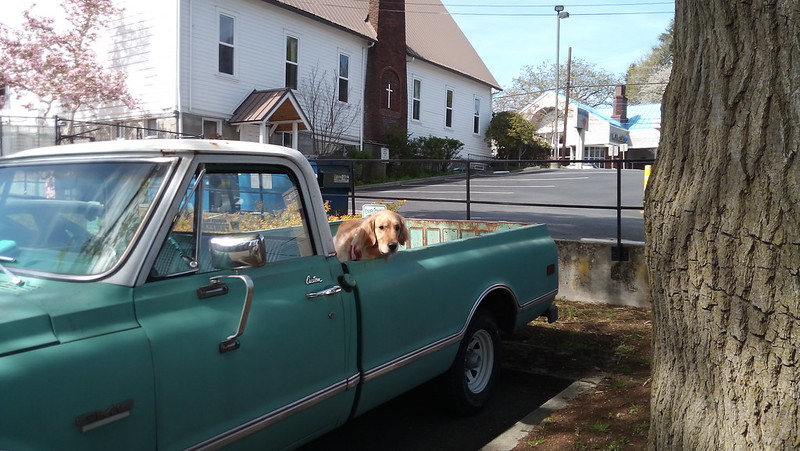 Some areas in the images look great, but I frequently get blurred spots or foggy-ness from lighting. A 13MP camera should be sharper. Auto-focusing could be hit or miss as well. Battery life is the bread and butter of the Power (that’s why it’s called “Power” in the first place). The battery is a whopping 6,050mAh. To put that into perspective, it’s double what the Galaxy S7 and HTC 10 have, and 450mAh more than double the LG G5.

Does that translate to awesome battery life? Yes! With moderate use, I got just over two days. My screen brightness averaged around 75% and my usage consisted of common apps like Google Maps, Chrome, Camera, YouTube, Play Music, Hangouts, Google+, Twitter, and Feedly. Heavy usage should get you a day and a half (unless you’re playing games nonstop).

Two notable power saving features are a “intelligent” standby mode (the Power isn’t on Android 6.0, so no Doze) and a scheduler that can turn the phone on/off at times you set.

The Power is currently on Android 5.1 Lollipop, but Ulefone is explicit that Android 6.0 Marshmallow is coming. I’ve touched on that Ulefone isn’t too invasive to the true Android experience, but there are tweaks here and there. Some are nice additions but then others aren’t really necessary. For instance, the app drawer and persistent Google search bar overlays are different. Also, there’s redundant Ulefone apps for internet, messaging, and gallery (OEMs should just use Google’s apps).

Fortunately, performance isn’t really affected by the additions. Some of Material Design’s animations are gone, but that’s more of a preference. UI navigation doesn’t have stock’s fluidity, but it’s a snappy experience instead. I must say that actions aren’t 100% smooth. Particularly, the frame rate slightly drops when scrolling (like in the Recent Apps carousel or in the browser). But that’s more of a nitpick; the software isn’t laggy.

Ulefone’s additions in the Settings menu are a different story. They’re useful. We already talked about some of the battery saving features, but gestures are another area that Ulefone pushes. For instance, there’s a multitude of unlocking motions that you can set, as quick shortcuts when the phone is on standby. One of those is double-tap-to-wake. 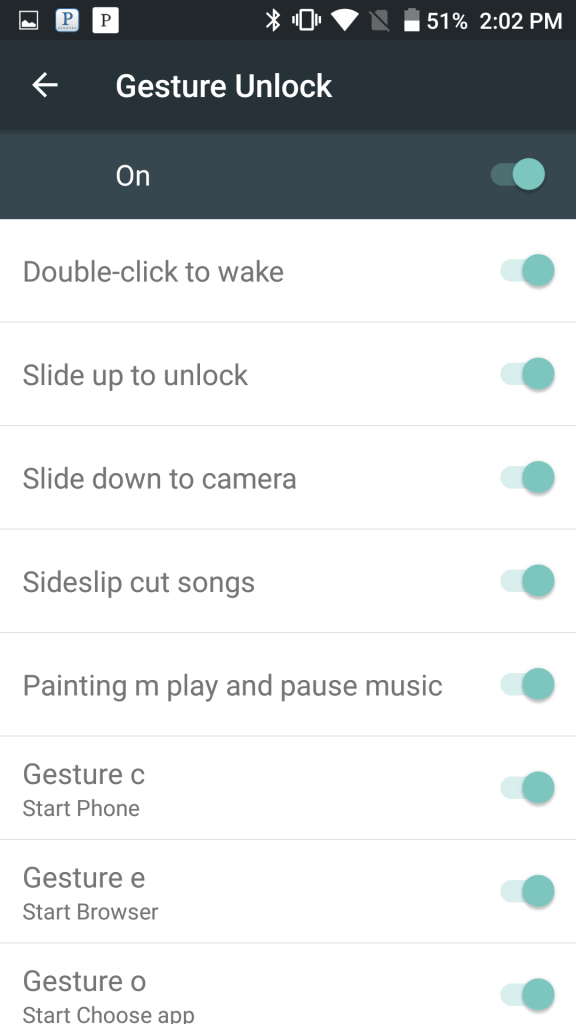 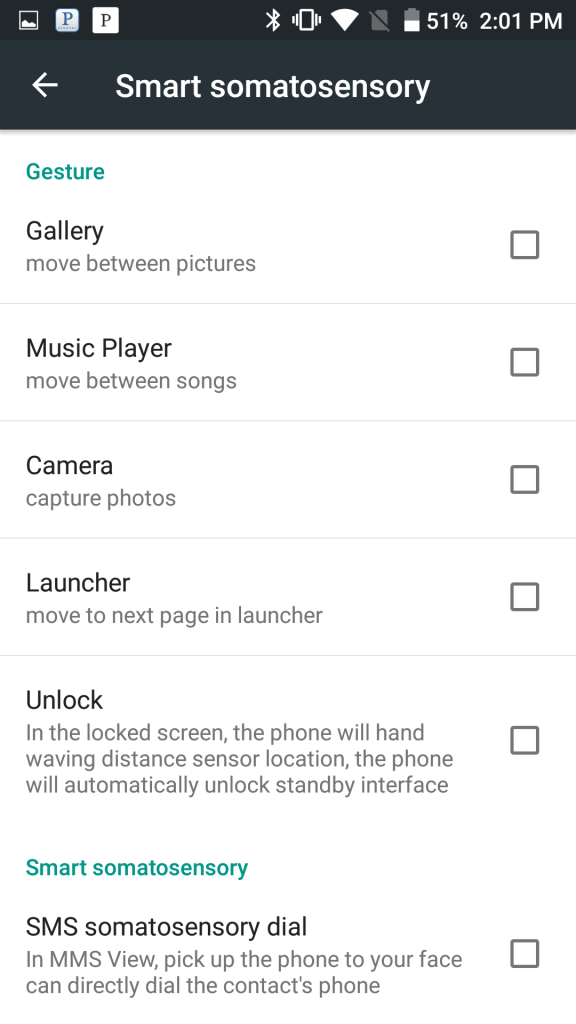 What’s more, there’s a separate set of shortcuts that utilize the front camera to recognize hand waving. This lets you scroll through pictures or skip songs without touching the screen.

The Ulefone Power is a tremendous value in my eyes. No, it’s not perfect, but it’d be the wrong thinking to expect it to be. This is a $169 smartphone. From that perspective, I’m quite surprised how much it offers.

Front and center is of course the battery life. It is outstanding, and I imagine could be enticing enough to get heavy users over to Ulefone’s side. Fortunately, that’s not all it has going for it. The performance is quick, the display is well done, and there are some nice hardware and software considerations. The camera performance is the only thing that holds the Power back, and I wish it weren’t so.

If you like what you see, you can pick up the Ulefone Power from GearBest for $169 (and free shipping).