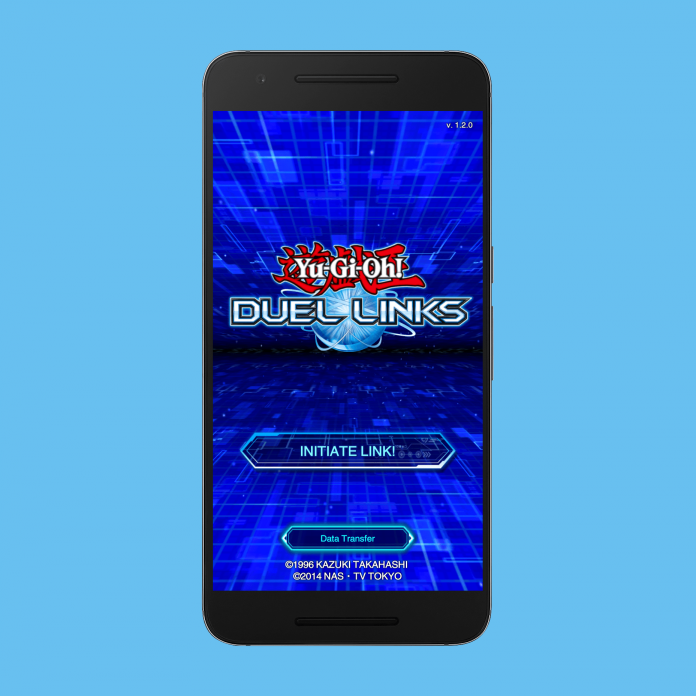 We all know how successful Yu-Gi-Oh! has been over the years. Even though it has seen better days, especially when the anime was everywhere, the trading card game still gathers a sizeable amount of fans every year, and Konami, the company behind it, still updates the game with new card types and variants. In an attempt to show the TCG to a new audience, while giving fans a chance to relive the glorious days they left behind, Konami released Yu-Gi-Oh! Duel Links.

As is the case with more and more games these days, the initial Play Store download doesn’t yield the whole game. Upon launching it, after selecting your language (currently limited to English or Japanese), you are required to download additional files (252, to be exact, at least if you choose English as your language).

After this lengthy process, you are asked for your level of experience in Yu-Gi-Oh! related matters. This won’t change the game’s difficulty or anything, it is just there for the developer to have more information about its players.

Duel Link's Setup and Tutorial
1 of 4

Next, you will be able to choose between either Kaiba or Yugi! The other character will become available later, so just go with whoever you like. Blue Eyes White Dragon or Dark Magician? 3000 ATK or 2500 ATK? A successful entrepreneur owner of one of the biggest corporation in the world or a guy who does illegal moves in the TV series to win? Just saying.

You will also have your first duel! The game will teach you the basics of how to play. If you are familiar with the card game, then you don’t even need the tutorial, since it is exactly the same thing (with very few exceptions). If you are not familiar with the game, then this first duel is probably going to be very confusing and overwhelming, but don’t worry, Duel Links has you covered.

After going through all the setup process, you are presented with Duel World, the stage that will witness your rise to the top. It is divided into several parts. The first one is dedicated to a portal in which renowned characters are transported. These include well-known faces as Joey Wheeler and Tea Gardner.  There’s also a part that is focused on PvP battles, another one on the shop, and the final one on the Card Studio.

If you don’t know the basics of Yu-Gi-Oh!, then let me tell you that the concept itself is really easy, but the bevy of alternatives that the card present can make it very complex. The majority of times you will have to deal with monster, spell or trap cards. Monster cards have an attack and defense value associated with them, and monsters set in attack position can target other monsters during your turn.

Spell and trap cards do very specific effects, which are described on the card, and can range from increasing your monster attack/defense points, destroying other cards, drawing cards from your deck, etc. Each player gets 4000 life points at the beginning, and the goal is to decrease your opponent’s life points until they reach 0.

To progress through the game, Duel Links incorporates something called Stages. You increase them by doing specific tasks, like win X amount of duels, play against Tea Gardner, do a specific amount of tribute summons, etc. With each stage, you will unlock new stuff, such as a card dealer that will exchange coins for cards, or new characters that you will be able to use.

The main aspect of Duel Links, however, is the duels. You are given a deck at the beginning, which contains 20 cards. You can play against CPU opponents scattered through Duel World or against humans through online battles. Whichever your opponent is, the game will toss a coin and decide who starts. Each player draws four cards from their previously shuffled deck, and the duel gets underway.

You will soon find out that your starting deck sucks, and figure that you will need to improve it. The easiest way, unsurprisingly, is by buying cards with gems. As you might have guessed, the game uses coins and gems as a currency, and you can buy gems with real money. Very original, I know. Yet, unlike similar games, gems are very easy to stumble upon. They almost give them away.

Booster packs are 50 gems a pop, but they only contain three cards. They all include at least one rare card, though. There’s a chance of getting super rare and ultra rare cards, and the amount of Kuribohs that show up after opening the booster pack can give you an idea of how uncommon the cards are.

After Stage 8, you will unlock the Card Trader, which will sell specific cards for a limited amount of time. Sometimes, these cards can’t be found anywhere else, so it is a great way of getting something tailored to your needs.

There’s also the Card Studio, in which you manage all of your cards and decks. You can add up to 60 cards to your deck. This area will show you all of the cards you have acquired. For this same reason, this section can get unwieldy and tapping targets can be a cumbersome process. For beginners, there’s a very handy automatic building of decks, which will create a deck for you by gathering your best cards.

On top of that, Konami periodically adds special events. For example, just some days ago, the Toon World ended. In this event, organized by no other than Maximillion Pegasus, you could unlock special prizes and fight the creator of the game himself in order to unlock him as an additional character. With Konami backing this game, this type of events are guaranteed for the foreseeable future, adding a lot of replay value to the game.

People who have played the Yu-Gi-Oh! card duels know that they can be extremely interesting, and that is also true with Duel Links. Some modifications have been made to the core gameplay to make it faster and more suited for mobile devices.

For example, you only get 4000 life points, instead of the 8000 you get in the TCG. Also, there’s no main phase 2 (the one after the battle phase), something that could put down experienced players.

However, battles are most of the time very interesting. Thanks to the robust mechanics that Yu-Gi-Oh! has built over the years, there’s a myriad of strategies that you can use, and, combined with the random aspect of the cards, every duel you have is completely different.

I was afraid that this excitement wasn’t going to be captured in the game, but fortunately, I was wrong. Battles are thrilling and when you’re on the verge of losing, you can really feel the tension. Even the music changes.

In the beginning phases of the game, the AI is laughably naive. Seriously, I summoned a 3000 ATK Blue Eyes White Dragon with a Mountain field spell and you summon a 800 ATK, 2-star monster in attack position? This makes the initial stages boringly easy, and some players could mistakenly think that this is the case for the whole game. However, this gets corrected as your stage increases.

You should be happy that the duels are short, because the game eats up your battery without mercy. This, coupled with several network issues makes me think that the priority of the developer team was getting the game out rather than optimize it. I don’t blame them, but this makes up for a poor experience in the long run.

My friends and I have had such a hard time trying to set up a battle that we sometimes just give up. On individual PvP battles against random people, I’ve experienced many instances of connection interruption or malfunctioning in general. I hope this gets addressed in the future, and it has gotten better and better, but it is still a serious inconvenience that should not be there.

Graphics on this game are two-sided. On one hand, Duel Links have really nice graphics for NPCs, monsters and card illustrations.

For example, when you summon a monster, the game will show a hologram of the card’s art on top. If, for example, you are using Kaiba, and you summon a Blue Eyes White Dragon, then a neat (skippable) animation will be shown.

However, elements shown in the app sometimes make the screen too cluttered with information or tappable elements. The Card Studio is a particular offender.

Sometimes you click on a card and it is not selected, or a swipe to add to the deck doesn’t register. In an effort to show as many cards as possible, the game shows an overwhelming interface. This could put down newcomers, who can think that managing a deck is harder than it should be.

Konami has hired several voice actors to record generic one-liners to incorporate on duels. This means that when you’re fighting someone, you will normally listen to characters saying stuff like “I draw!” or “I summon this monster in Attack position.”

This can be a good thing or a bad thing, depending on your liking. I found it very nice at the beginning but listening to Kaiba saying “My turn” for the millionth time is not amusing anymore.

Other sound effects incorporated are pretty good, especially on duels. They all follow the same line of conveying a virtualized world, so, thanks to them, the experience gets more immersive.

If you are in the middle of a duel, the music changes to a fast-paced and entertaining tune, and it even gets faster and more dramatic when you are close to winning. In almost all of the areas, though, the same song is used.

Yu-Gi-Oh! Duel Links is undoubtedly an entertaining game. The TCG has been well adapted to our mobile world, with shorter duels but the same satisfaction. Also, the myriad of events and different game modes will keep you entertained for weeks.

This is not to say that the game is free of issues, though. The connectivity aspect of the game is particularly bad, although it has been getting better over the last few days, so surely the developers are working on it. However, if you want to have some fun playing one of the most famous TCGs around for free, even if you are a novice, there’s lots of fun to be had with Yu-Gi-Oh! Duel Links.