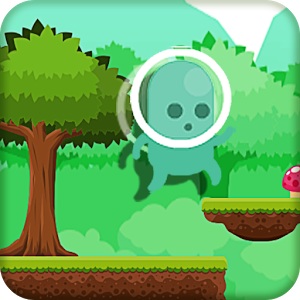 Zinga Jump is a simple platforming game where you collect coins while running to the end of the stage avoiding obstacles along the way.

Cost: free (with ads and micro-transactions)

Zinga Jump is another game that hearkens back to the old days of mobile gaming, where you didn’t need as much substance or style to make a decent game. Unfortunately for Zinga Jump, it’s 2016 now and we have a lot of great mobile games available that offer a ton of content and polish, some even without ads. Zinga Jump is simple and rather innocuous, but there are some elements that make it almost impossible to recommend to anyone. at least for me.

Let’s start with the art and sound of the game. The resolution of the character sprite and backgrounds appear super low and blurry, especially on the QHD screen of my Nexus 6P. There’s also very little variety in the levels, as they all use the same scrolling backgrounds and obstacles all the way through. There’s also no real theme to the game, as you play a sort of cutesy alien character in what appears to be a generic “Mario” type landscape. I could give the simple visuals a pass if it wasn’t made in Unity, which has the potential for much better graphics and is relatively simple to use. The worst part of the style of this game however, has to be the music. A three second loop of annoyingly upbeat noise that plays from the moment you start the app onward to infinity. The music alone is enough to tell you to avoid this one, and sure you could mute it, but then what’s the point.

Gameplay-wise, Zinga Jump is a bore. Timed tapping with shoddy accuracy makes it very difficult for something so simple, but just easy enough to beat if you halfway try. The placement of platforms is odd, and makes timing rapid jumps harder than it should since the game doesn’t like to always respond when I tap the screen. When you lose a level, you’re greeted with a poorly-spelled “game over” screen as well, which just further adds to the frustration. Also, you could beat the whole game in an hour since there’s only about 24 stages in total, and no good reason to replay them at all.

The biggest issue, however, has to be the micro-transactions. For some reason, the developer has seen fit to lock the last six levels behind a nonsense paywall, because of course. If that wasn’t bad enough, the whole of the six levels can only be bought individually with coins, that cost $0.99 for 250, which means in order to get all six, you’d be forced to spend another $0.99 for just one level. On top of that, there’s a 1000 coin option for $2.99, but why would anyone ever buy that? You may say “well, surely there’s more to be purchased with coins that justify the existence of such purchases.” well, you’d be wrong. There’s nothing else. Six levels, and that’s all. It would almost be okay if you could unlock the levels with the coins you collect from the actual gameplay, but guess what, those coins are meaningless and aren’t actually in-game currency at all. The game tries to force you to pay two buck minimum to unlock all it’s content and beat the full game, when it’s levels aren’t remotely worth the cost. It’s an awful scam and the developer shouldn’t feel proud of this game at all in this regard.

Oh, and on top of that it has the occasional ad as well.

All in all, Zinga Jump is probably harmless, but the overall low quality and way it handles micro-transactions make it seem like a scam. I’d be hard pressed to find a less shady cash grab in the Google Play Store today. How it has a four star rating is beyond me, but either way I’d steer clear of this game for now.

Download Zinga Jump (if you must) from the Google Play Store