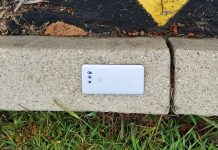 LG is having a killer year. After the disaster that was the LG G5, in the past 12 months, LG has released two of...

The Nexus 9 may have only been announced yesterday, and doesn't even go up for pre-order until tomorrow 17th October, but it seems someone...

LG G2 hands on: Is there still room for LG?

Today in NYC I took a look at the brand new G2, the latest flagship offering from LG. After sitting through a very odd...

[Video] Sprint Galaxy Nexus gets a good hands on and close up (Mr. President)

The folks over at CNET have gotten their hands on the 4G LTE Sprint Galaxy Nexus... and it's as real as real can be....

EXCLUSIVE: First Ever Hands-On with BioLock; Beta Coming to a Nexus S Near You...

CLARIFICATION: There seems to have been some confusion that needs addressing. BioLock is NOT becoming a part of the CyanogenMod source code. CM is...

Hands On with the Motorola XOOM, and a First Hands-On with Honeycomb

The lucky dudes over at Engadget got an interesting hand-on with the newly announced, Honeycomb-equipped, Verizon Motorola XOOM tablet. They managed to bypass the demo videos and mess around with the apparently "early build" of Honeycomb.

Since its mid-summer release, the HTC EVO 4G has received a fair amount of publicity. With a 4.3" screen, it is one of the largest Android phones on the market, and it is one of only four phones with "4G" data capabilities. With increased visibility comes increased popularity, and it is clear that the EVO 4G has been well-received by the public.

http://www.youtube.com/watch?v=Fq0k-r5yErg Engadget got a hold of a couple of Dell Thunder prototypes recently and boy oh boy were they drool-worthy. The curved glass screen, sleek...