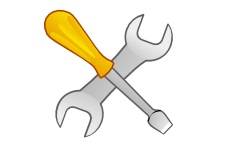 This series of posts highlights a number of other languages and toolkits for developing Android applications, beyond the standard Java-based SDK. These are a preview of topics to be covered in CommonsWareâ€™s upcoming book â€œAndroid Beyond Javaâ€, to be released in 2010.

Scripting languages for Android come in two forms: ones that run via their own activity, and ones that are designed to be embedded in another application.

The most visible example of the former is the Android Scripting Environment (ASE), which offers you the ability to write scripts in “Python, Perl, JRuby, Lua, BeanShell, and shell”. Some of these, notably Python and Perl, are achieved through ports of their C-based interpreters, rather than via JVM versions of the langauge (e.g., Jython). Through some ingenious RPC mechanisms, these C-based interpreters still have access to Android APIs, as wrapped by the ASE environment itself.

However, in some cases, you may wish to embed an interpreter in your own application, for user scripts or the like. Here, interpreters once again come in two flavors: those that try to generate JVM bytecodes on the fly, and those that don’t.

Those that try to generate JVM bytecodes on the fly will have problems with Android, because Android does not execute JVM bytecodes. Android executes Dalvik VM bytecodes, and the JVM->Dalvik conversion happens in the development environment, not on the device. Hence, these languages either need a mode to disable such bytecode-generation optimizations, or they need to be taught how to create Dalvik VM bytecodes as an option.

Some languages that fit this pattern include:

Other languages, like BeanShell, do not attempt to generate JVM bytecodes, and therefore work quite nicely on Android. However, watch out for old JARs. In the case of BeanShell, the JARs up on the official site were compiled with Java 1.4.2, which does not work with Android. Recompiling the code under a newer Java compiler clears up that problem.

If you are aware of other scripting languages, embeddable or otherwise, that work on Android, post them in the comments!