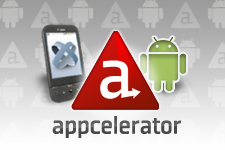 Enabling the Ecosystem is a series of interviews with those people and firms that are helping to build the overall Android ecosystem.

This week’s interview is with Jeff Haynie, CEO of Appcelerator. Appcelerator made a splash recently when they announced their Titanium software development platform for Android and iPhone.

AG: What is Titanium Mobile?

JH: Titanium Mobile lets web developers create native iPhone and Android apps with the web technologies they use today.Â  Using a set of common APIs for UI and phone features like geo, camera, video, and filesystem, a developer can quickly develop an application with Javascript/HTML/CSS that looks and performs just like a natively developed iPhone or Android app.

AG: Is there are particular target type of application or developer you are aiming for with Titanium Mobile?

JH: We are targeting Web developers primarily; however Android developers with Web skills that are looking to have cross-platform exposure to both Android and iPhone are certainly welcome.

AG: How would you contrast Titanium Mobile with PhoneGap, which may be somewhat more familiar to current Android developers?

JH: We’ve worked really hard to make applications written in Titanium look, feel, and function as native applications.Â  For example, in a typical page, we provide direct access to the top nav, middle content and native UI, and tab bar as discrete areas, each with their own native functionality.Â  So you can have native nav buttons up top, a native table that is actually rendered by the phone directly and therefore offers native phone performance for large datasets in the middle area, and native buttons at the bottom.Â  We are the only cross-platform offering that lets you have native access to every part of your application.Â  We also compile down to a discrete binary, so the application logic is static on the device.Â  This is important so the underlying code can’t be edited after the application is submitted to an online store.Â  Finally, we support Windows, Mac, and Linux platforms, which means that developers can build for netbooks or desktops today with the same code base.

Part two of the interview, coming later this week!