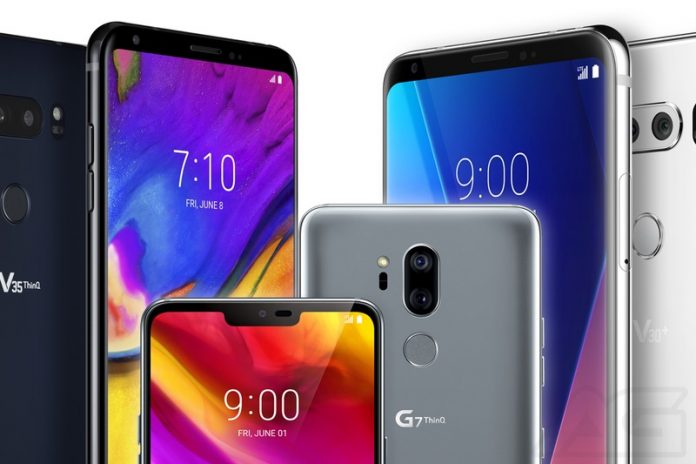 LG has traditionally released devices the same time as its biggest rival, Samsung, but after beating the Galaxy S8 to launch in 2017 with its G6, and still getting trounced by it in sales, the company decided a change in strategy is needed.

Ever since CES 2018, we’ve heard LG was planning to alter its strict yearly release cycle. CEO Cho Sung-jin said the company “will unveil new smartphones when it is needed. But we will not launch it just because other rivals do.”

This might explain why not even a month after it introduced the G7 ThinQ flagship, LG also launched the V35 ThinQ, which comes to succeed the V30. Well sort of.

READ: The first thing you should do with your new Android phone

The LG V30S ThinQ, which was introduced back at MWC 2018 is an incremental update, mostly when it comes to software. But the LG V35 ThinQ brings a bigger hardware upgrade.

All in all, LG’s lineup seems very confusing, so in what follows we’re going to try and highlight the differences between the two flagships and the V30 which was launched last year in August.

From a design perspective, the V35 is extremely similar to the V30, so much so that you might have trouble telling the two apart. They both feature a 6-inch display with curved corners and razor-thin bezels and …no notch. They also have glass backs with dual camera assemblies and a fingerprint sensor living beneath.

But while the two handsets share the same IP68 certification, the V35 features Gorilla Glass 4 instead of the Gorilla Glass 5 on the V30.

If you really love the notch, you’ll have to go for the G7, which is also a bit taller and thicker than the V35 and V30. It also weighs a bit more.

The display on the G7 is quite similar to the one of V30 and V35, save for the notch. It’s a bit larger at 6.1-inch and comes with 3,120 x 1,440 resolution. Now while the G7 uses a Super LCD display, the V30 and V35 are rocking sharp and vibrant OLED screens. Yet the G7 does have an advantage, its Super Bright Mode. With this mode turned on, the display will hit 1,000 nits thus providing plenty of brightness, so you can see clearly in daylight.

Obviously, there are advantages and disadvantages to having an LCD or OLED screen. Depending what you’re looking for, it’s up to you to decide which form is superior.

Obviously, the LG G7 ThinQ also runs on a Snapdragon 845 with 4GB of RAM and 64GB of storage (in the US). They all support microSD card slots.

There’s another big difference when it comes to audio. Both V30 and V35 offerings offer quad DAC support for headphones, but the V35 has DTS:X 3D surround sound. And so does the G7.

Unfortunately, the V35 does not get the Boombox speaker of the G7, which uses the inside of the phone as an echo chamber to enhance sound quality.

The cameras on the V35 are very similar to the G7’s. There’s a main dual-lens setup on the back comprised of two 16-megapixel sensors, one standard and one wide-angle.

In contrast, the V30 paired a 16-megapixel sensor with a 13-megapixel wide-angle one. There’s a narrower field of view of 107-wdegrees on the V35, compared to the 120-degrees on the V30. LG says this will enable users to shoot wide angle photos with less distortion and increase sharpness.

The front camera also gets a bump to 8-megapixels on the G7 and V35 from the 5-megapixel of the V30.

What’s more, the V35 ThinQ benefits from the AI camera that was introduced by the V30S ThinQ. Although these features weren’t originally offered on the V30, they eventually made it on board via a software update.

The AI camera will do things like automatically identify what’s in the shot and help users find the optimal settings to make the photograph look good. The V35 ThinQ also gets the 4K video recording mode, as well as the 240 fps slow-motion one.

The LG G7 ThinQ has yet to start shipping, but the phone is up for pre-order at Verizon, Sprint and T-Mobile starting at $750.

The LG V35 ThinQ, on the other hand, will only be offered by AT&T and Google’s Project Fi. Pre-orders start on June 01. The phone will cost a heavy $900.

So what should you get? As always, it depends. The V35 offers the same great design as the V30 in a slim glass package that has been updated to be as powerful as recently launched flagships. The camera also gets a boost to give you the same experience as you’d get on the G7.

However, there’s no notch on the V35 which includes an OLED display and not an LCD one. Also note that the Boombox speaker is missing from LG’s latest flagship, although it still has Quad DAC and DTS-X Virtual Surround Sound. On the bright side, you get more RAM on board of the V35 and a bigger battery.