So there’s been a lot of talk over the last couple of weeks about this Stagefright vulnerability that has been found in just about every Android device. The team who found the exploit, released an app to let you know whether your device is at risk, but there’s still one question that remains. How do you protect yourself against losing your device to Stagefright?

Well today, we will take a look at some ways to try to protect you and your device, until your manufacturer and/or carrier get an update out to your device. The first step, would be to double check and see if your device is at risk. You can do so by downloading the Stagefright Detection App from the Play Store.

Before knowing what you can do to fix the problem, you should have some type of understanding as to what the problem does. So what Stagefright does, if it affects your device, is essentially take over your the MMS capabilities. If targeted, the device will automatically download the MMS, and open the video. The process that takes place after an MMS is received, is where Stagefright has been found. 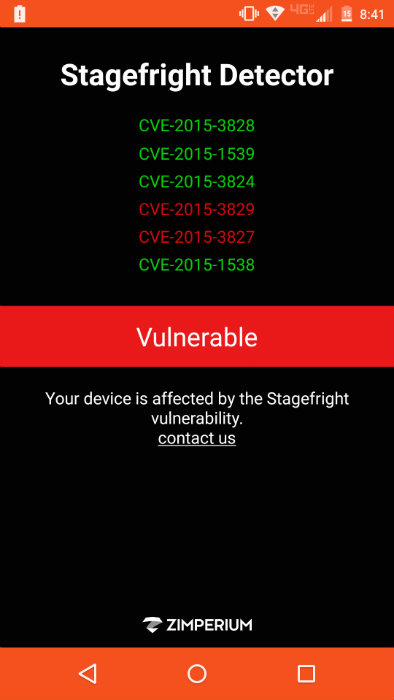 The Stagefright Detection App was developed by Zimperium, which was the group that found the vulnerability. Once you’ve run the analysis and get your result, don’t panic if you’re vulnerable. There are still steps you can take to avoid having any issues pop up.

So now that we know WHAT happens, we can now take the necessary steps to better protect our devices from being compromised. First and foremost, you’ll want to head on over to the update section of your device. Manufacturers, like LG, Samsung and Google, have been trying to get their devices updated as quickly as possible to protect their users.

If you don’t have an update, the next step you will want to take is to check for updates for the messaging app of your choice. Since the vulnerability is found through the use of the SMS application, developers have been updating their apps to protect against Stagefright. For example, Textra and Google Messenger have recently been updated to patch the loophole found. While this last suggestion may seem trivial, it really could be beneficial in protecting your device. Be sure to not open any MMS messages from any number that you don’t know. You don’t want to open an MMS from someone you don’t know and then be instantly affected, so don’t take the chance. Double check the phone number before opening the message.

These are just some steps you can take to try to avoid being affected by Stagefright, but these definitely will help. As we’ve stated, and covered here at AndroidGuys, manufacturers are working very hard to help protect their users against vulnerabilities like this going forward.

Let us know of any other suggestions that you may have to share with the rest of us to make sure we aren’t affected by Stagefright. Leave your suggestions in the comments below, and let us know what you think about the Google and Android manufacturers jumping on board with a plan to keep us all protected.