Mozilla has been developing FireFox OS behind the scenes for about two years now. Much like Android, it’s an open-source platform based on the Linux kernel, but unlike Android it was designed from the ground up to be a more native development platform for web developers (Chrome OS, anyone?). The goal of the project from the beginning has been to “pursue the goal of building a complete, standalone operating system for the open web” in order to “find the gaps that keep web developers from being able to build apps that are – in every way – the equals of native apps built for the iPhone, Android, and Windows Phone 7.” This week they announced that they had also built an Android app based on Firefox OS 2.5 that would let you experience the OS without having to leave the comfort of your normal [Android] phone.

This tutorial is going to explain how to download and install the Firefox OS APK for anyone that isn’t familiar with that process. The first thing you’ll need to do is download the APK from Mozilla’s website: Firefox OS APK. I recommend doing this from your phone, but if you did it from your PC you’ll need to find a way to get it to your phone; my preferred method is Dropbox.

This step is somewhat tricky because some phone manufacturers like to move this setting to different parts of the settings menu (some put it under the applications section), but it’s usually in the security section (that’s where it is in AOSP). Navigate to the settings menu, then down to security and then turn on “Unknown Sources – Allow installation of apps from sources other than the Play Store.” You’ll also need to click “OK” on the security prompt. In the case of a Samsung phone, it will ask you if you want this to be for one-time only; I recommend that you keep it on only for this single installation. For a brief tutorial on installing APK files in general, check this out. 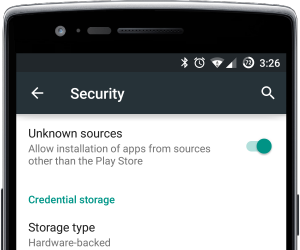 Find the APK and Install!

You’re finally ready to install the app! If you still have the download notification in your notification drawer, you can tap on that and it will bring up a new prompt. If it’s your first time sideloading an app, you’ll be asked if it’s okay for Google to scan apps before installation to be sure they’re safe. I definitely recommend you do this. Sideloading applications can be dangerous if you’re getting them from potentially untrustworthy sources. Luckily, Mozilla is someone we can trust! The next prompt will give you information about the permissions that the app is requesting and you can either cancel or install the app. We want to install it, so tap install.

If you had already dismissed the download notification, use an app like Solid Explorer to navigate to your downloads folder and select the installation file from there. Most phones also have a downloads application built in that you can use to do this.

You’re done! Hit the home button on your phone and you will be prompted to give it a go as your new home screen. After a few minutes playing with it, I’m very impressed with what they have done, here. It’s clearly set up to be a launcher replacement, which means it is slightly different than it would be on the real OS, but everything seems to work pretty well. It has its own phone application, its own messaging application, and even its own store! The store appears to just be a means of navigating to popular websites, but maybe that’s the point of Firefox OS. It’s meant to be light (so it isn’t hardware intensive) because the goal that they were touting when they first announced the OS was that it would be made for low-end phones that would be sold in developing nations.

If you scroll down past all of the “built in” applications, you will get to all of your installed applications as well, so this can actually act as your launcher if you feel like giving it an extended try. If you have any questions about the tutorial or Firefox OS itself, drop us a line in the comments section below!

How to install region restricted Android apps on your device