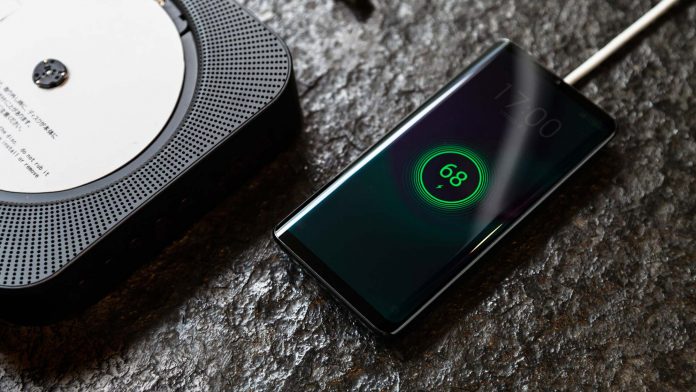 While charging your phone is as simple as plugging it in or dropping it onto a wireless charger, the actual process requires quite a bit behind the scenes. The charger, cable, and your device all work together to produce a safe, fast charge.

In this article, we’ll examine what’s going on in each of those places.

Voltage is measured in volts and represents how much current can be transferred at any given time.

Amperes, measured in amps, is how fast that current can be delivered. These two numbers multiply to give you wattage, which is the number you’ll most likely see when buying chargers.

The USB-C PD standard implements a fixed voltage of 20V, and can have a current up to 5A, multiplying for a total of 100W. Manufacturer and charger company solutions might implement different standards and methods of attaining that wattage while still delivering a safe, full charge.

As charging gets faster, usually we look for bigger and bigger chargers to support it. Moreover, in addition to faster charging, there’s the increasing danger of heat buildup. To address this and find a substitute for silicon, charger manufacturers have turned to Gallium Nitride (GaN).

Simply put, GaN can charge things at higher voltages while producing less heat. It can also produce much smaller chargers because heat dissipation is less of a concern and components can be placed closer together.

What about wireless charging? You’ve likely seen a pad or a dock or something similar in your life, possibly even using on. How does it work? I don’t really know either. It has something to do with magnets, and I guess that’s really the most important part.

A coil in your wireless charger pushes a magnetic current into the surrounding area, and then a coil in your phone picks up that current and therefore charges your phone. Or something.

Apple has also introduced Magsafe charging, which allows the charger to connect to the back of your phone while you’re still able to use your device, but this piggybacks off the Qi standard and therefore maxes out at 15W.

Most modern consumer electronics implement USB-C in some form and prefer it over microUSB (also called USB Micro-B). USB-C was introduced in 2014 and has undergone many evolutions since then.

There are two main advantages of USB-C: It is reversible in that it doesn’t matter how the cord gets plugged in, plus it’s versatile to the point where it can replace most other ports you might need on a laptop. You can use a single cable to charge your device, power external displays, or transfer data.

The most common version of USB implemented currently is USB 3.2, though USB4 is already available. Here’s what you need to know about the different versions:

The USB 4 specification also brings optional support for Thunderbolt 3, which will be discussed shortly.

USB-C also brings the Power Delivery standard, which supports power levels of up to 240W (this is new as of 5/26/21, so most devices will likely max out at 100W), bidirectional power capabilities, and better power management across devices.

An additional revision on top of that is PPS or Programmable Power Supply; however, it doesn’t affect speeds or long-term battery health by allowing for stepwise changes in both current and voltage.

E-mark is a chip within your cable (at least it should be if it supports high current charging) that helps your cable safely charge your device by identifying the cable and its current capabilities.

You might also have heard of milliamp hours or mAh, which is what the capacity of your phone battery is measured in. Now, a number like 3,500mAh may not mean much to you, but all you basically need to know is the bigger, the better.

If you want to dig deeper into what this means, download an app called Ampere. This helps you understand the current discharge rate of your phone in milliamps.

Say your phone is discharging at a rate of 300mA and you have a full battery capacity of 3000mAh. Simply divide the total capacity by the discharge rate (3,000/300) and you get a total battery life of 10 hours.

Your manufacturer most likely gives you some indication of what’s using your battery and how long it will last. which will likely conflict with the number you got from trying to measure it and this is because your manufacturer follows and tries to learn how you use your phone and can therefore calculate a more accurate number.

Quick Charge has been an implementation in devices running on Snapdragon chips for years and helped deliver top charging speeds for years, but this has changed recently.

Quick Charge 5.0 piggybacks off of USB-C PD and the PPS standard and attempts to make charging that way safer and faster.

The biggest way this is implemented is with dual-cell batteries or even triple cell batteries, and it can boost the charge above Power Delivery’s maximum of 100W: this can be seen in action with the RedMagic 6 Pros’ 125W charging.

The main solution that will be noted here is Oppo’s SuperVOOC, which is licensed and rebranded as OnePlus Warp Charge and Realme’s Dart charging. Right now this tops out at 65W of charging, though 125W charging will be expected to debut in phones later this year.

Xiaomi recently introduced 200W wired charging which can fully charge a phone in 8 minutes according to their videos. Huawei also has its own proprietary solution.

How to keep your battery charged well and lasting for years

Most experts recommend keeping your phone charged between 30 and 80 percent and topping up when you use about 20 percent of your battery. Also, do not leave your phone plugged in overnight or on a dock. Instead, charge it up before bed and then unplug it and top it back up in the morning.