As many of you likely know, Google is in the midst of releasing its next version of Android to the public. Known only as the “O” release today, it’s currently offered as a beta update to users who own select models of smartphones.

Those of you who like to be up on things as soon as possible may want to install and test out the forthcoming release of Android. Heck, we’re willing to bet that the earliest of adopters have already done so.

Google makes it relatively easy to sign up for, and install, the new build of Android. All you need is the right handset and a few minutes of your time. As of today, there are only a few models with support for Android O: Nexus 5X, Nexus 6P, Pixel, and Pixel XL. It’s also possible to install on the Nexus Player (set top box) and Pixel C (tablet).

Get Started Right Away 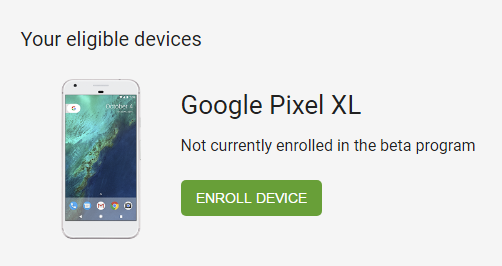 If you’ve got one of those phones and want to install Android O, head over to Google’s Android O Beta Program website. Once there, simply log in with your Google account after which you will learn what the program is about and how it works. It’s also here that we suggest you backup any files or media that you don’t want to lose.

Do note that any time you work with beta releases of software that you can, and may likely, run into the occasional bug or error. These are not final versions of apps or programs; perfecting entire platforms, such as Android, can be troublesome or difficult. This is often why things like this are limited to such a small smattering of models. 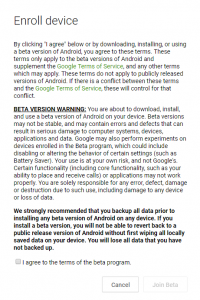 Once you are ready to install Android O beta, enroll your device by selecting the proper one from the list. You’ll get a disclaimer that spells out how things will work and what to expect. Agree to it, select “Join beta” and you’re ready to roll.

If there is a beta release to install, it will show up for you under “Check for Update”. If a new beta release is later pushed out by Google, you will receive a notification in your device at which point you can install it.  You can also navigate to the Settings > About > System updates in your phone to manually check for updates, too.

Note that security updates will be processed the same way as before.  Also, once an official, public version is made available, you can install that on your device.

If you’re the type of user who likes to flash ROMs and different builds on your phone, you’ll want to go with the more manual route. We’ve detailed that here before, but it requires you to visit the Google Developer site and download public beta images for flashing.

The updates that you’ll receive as a part of this program are pre-release versions, and may contain errors and defects that can affect normal functioning of your device. The feedback you provide on the Beta will help us identify and fix issues, and make the platform even better.

One of the main reasons for offering beta versions to the public is to test for problems or recurring issues. Should you see something that doesn’t quite work as expected, let Google know about it.

Send feedback directly from your device through the Android O Quick Settings tile or through Settings > About > Send feedback about this device. Don’t just install something that’s half broken and expect others to notify those in charge. Assume nobody sees the same thing as you and that you’re the first to encounter the problem. You may wish to join the Android Beta Program Google+ community to interact with others and share your feedback.

If you get to where you don’t like the beta release or have issues with the build, you can always downgrade to the stable, public stuff. Just like Google does with Chrome, it’s easy to switch builds. For Android beta, you can log in and “Unenroll” your device. Doing so will have Google push the latest general release to your phone or device. Just remember to back things up before starting!