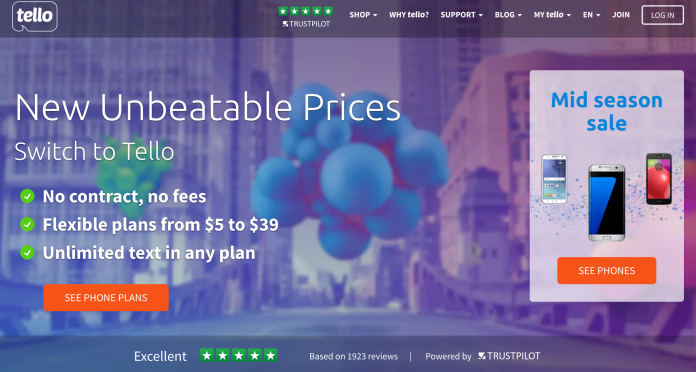 Phone prices show no sign of slowing down, but competition in rate plans and cheaper service options always prove attractive to cost-conscious customers. Consumers like choice and they love when they save a buck or two. To this end, we’re giving our readers a look inside Tello, a relatively new Sprint MVNO that can save you money. 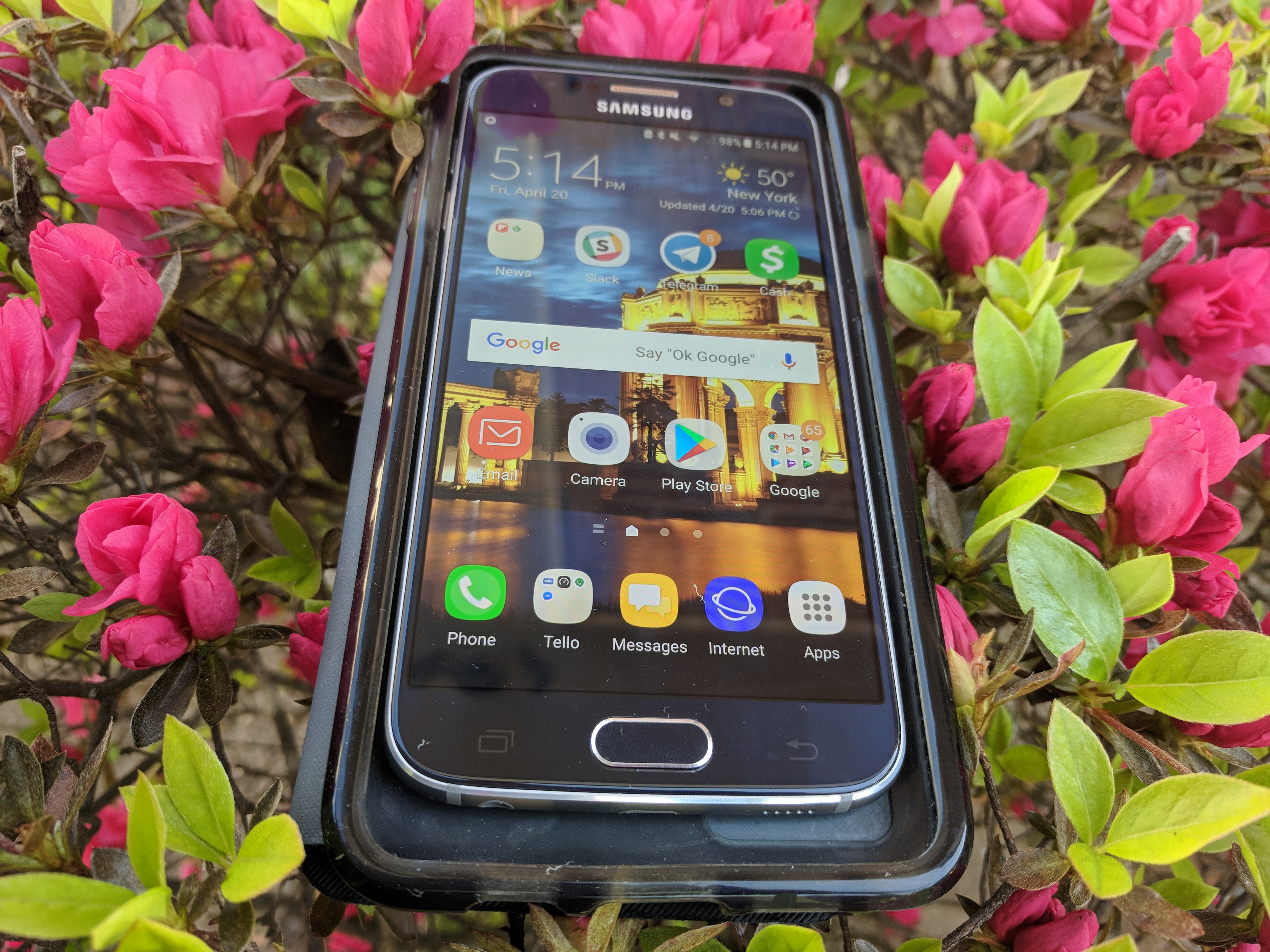 Tello is a mobile virtual network operator (MVNO) that uses Sprint’s network but charges far less. Sprint customers who have excellent coverage can bring their number and phone over and take advantage of its affordable plan prices. Since Tello runs on Sprint’s network, you can expect much of the same coverage area. 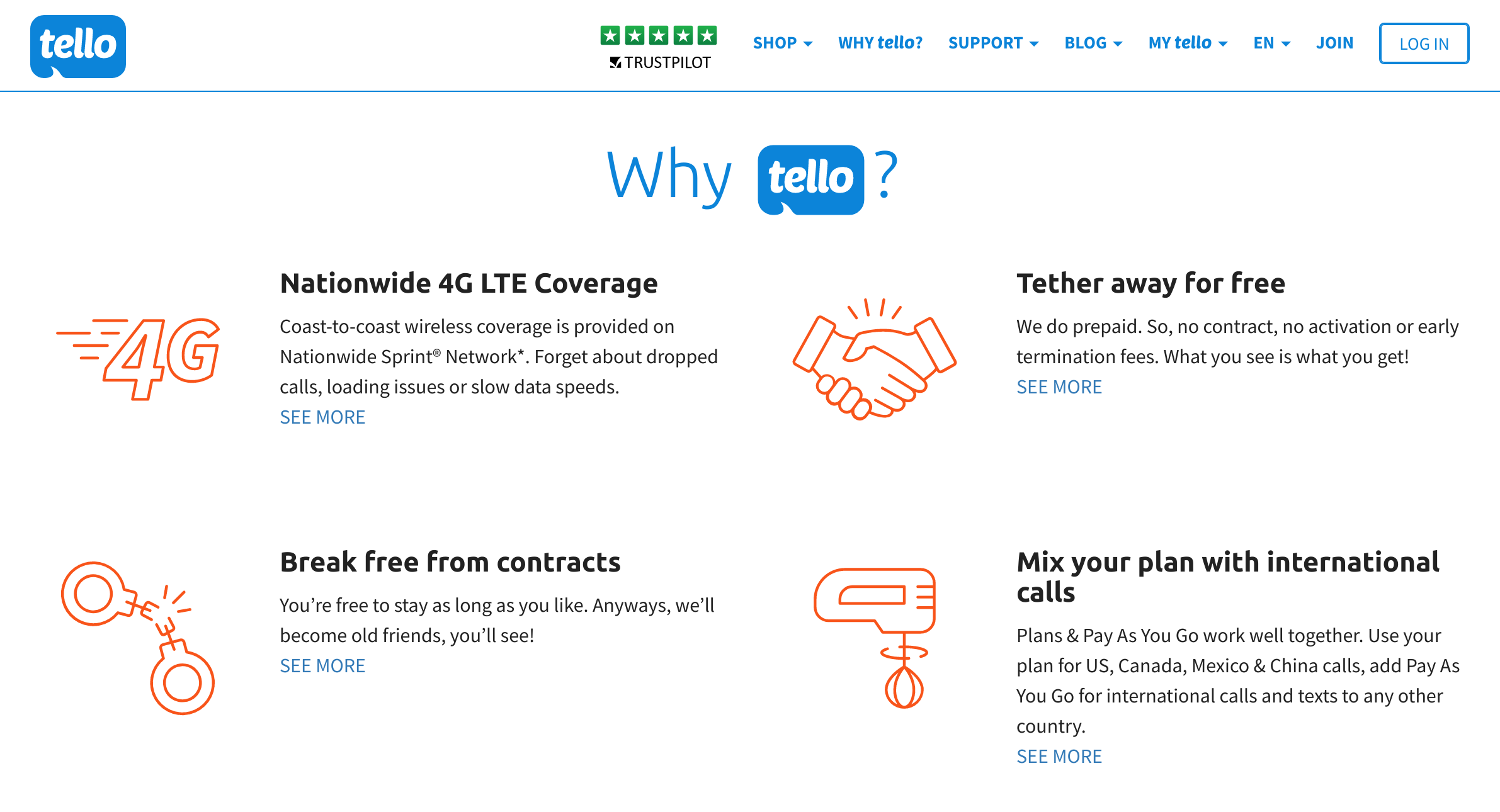 Those who live within Sprint’s premier coverage areas (read as: blazing LTE) can expect the very best of Sprint and Tello. Sprint has updated some cities of the US with its new LTE Plus network; Tello takes advantage of it as well.

To view your coverage on Tello, go to the carrier’s main page and select “Support” at the top right, then “Coverage” under support options. Enter your address, city, state, and zip code to check 3G and LTE coverage.

One more important thing to know: Tello provides information at your given residential address regarding both indoor and outdoor coverage. Some locations only have outdoor coverage, so bear this in mind.

Tello advises that it wants to make sure all of its potential customers know what they’re getting into. It asks that customers enter their information during the signup process so Tello knows if it can provide service in a given area. We gave them high marks for this proactive approach.

What helps Tello stand out from many MVNOs is that it lets you “mix and match” what minutes/texts/data combo works best for you. A 100 texting minutes with no internet (basic) phone plan costs just $5 a month. 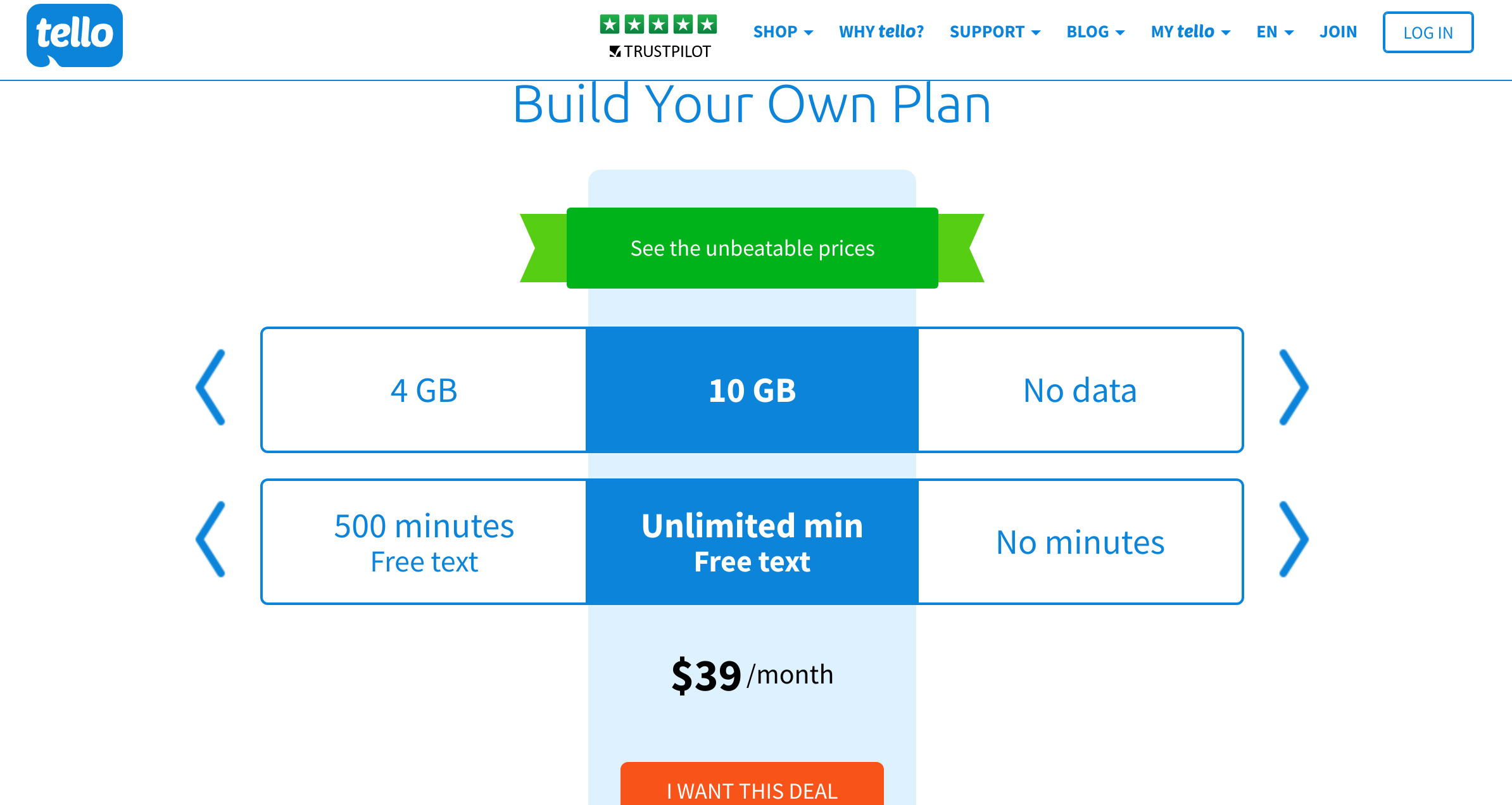 Tello’s pricing is more affordable than Google’s Project Fi (another MVNO that utilizes Sprint). Unlimited calls and text are $5 monthly while the same on Fi costs $20. Tello’s 10GB of data costs $34, but Google’s new Bill Protection Plan offers 9GB of LTE for free after paying for the first 6GB ($10 per GB).

Where Project Fi gains the advantage is in its tri-carrier support. Aside from Sprint’s towers, it also takes advantage of T-Mobile and US Cellular for coverage.

Ting, another Sprint MVNO charges separately for both calls and texts, which contrasts with Tello’s combo price for the same. Whereas Ting charges $10 per GB beyond the first 2GB, it allows for more than Tello’s 10GB data allotment.

Although 10GB data is the maximum allowed, you do get unlimited 2G data after you’ve reached your data limit. Throttled speeds are better than no internet, right?

While Tello prizes itself on plan flexibility, it does offer some ready-made plans for customers who want to “pick and run.” For what it’s worth ,calls to Canada, China, and Mexico are included in all call plans at no additional charge.

If a low-cost plan isn’t your thing, Tello also offers pay-as-you-go options. Calls in the US will run you $.03/minute and just a penny to send a text. Data is rather expensive though at $2/MB. You can also call places like India, Namibia, and Cuba for a nominal fee.

To start service, visit the carrier website and select “Join” at the top right. Fill out the needed information, then join. Tello will contact you for verification before processing your order. The carrier says it verifies every customer to prevent internet fraud, a wise move in our cyberspace age.

Sprint customers can bring a Sprint-branded phone to Tello. Tello is careful to point out in its FAQ that “You can enroll into our network any CDMA device free of contract, developed for Sprint or any Sprint MVNO.” If you purchase a phone from Tello, you can request a free SIM card to get started. Bring your own phone, and your SIM card is $9.99.

If you don’t want to bring a phone with you, Tello also sells gently used devices as well. Customers who want to purchase a phone will need to select “Shop” at the top of the main page, then “phones.”

Once the SIM card arrives in the mail, you’ll need to activate your service either 1) on the Web or 2) within the My Tello app. Download it, log in with your personal info, then follow the instructions on-screen.

Tello provided the Samsung Galaxy S6 we used for this review, but it offers much newer devices as well. There appears to be something for every budget.

My Tello is useful for more than activation and service information; it is also useful for Wi-Fi calls. Wi-Fi calls are handy for customers who live in extended coverage areas that cannot access Tello’s cellular network. 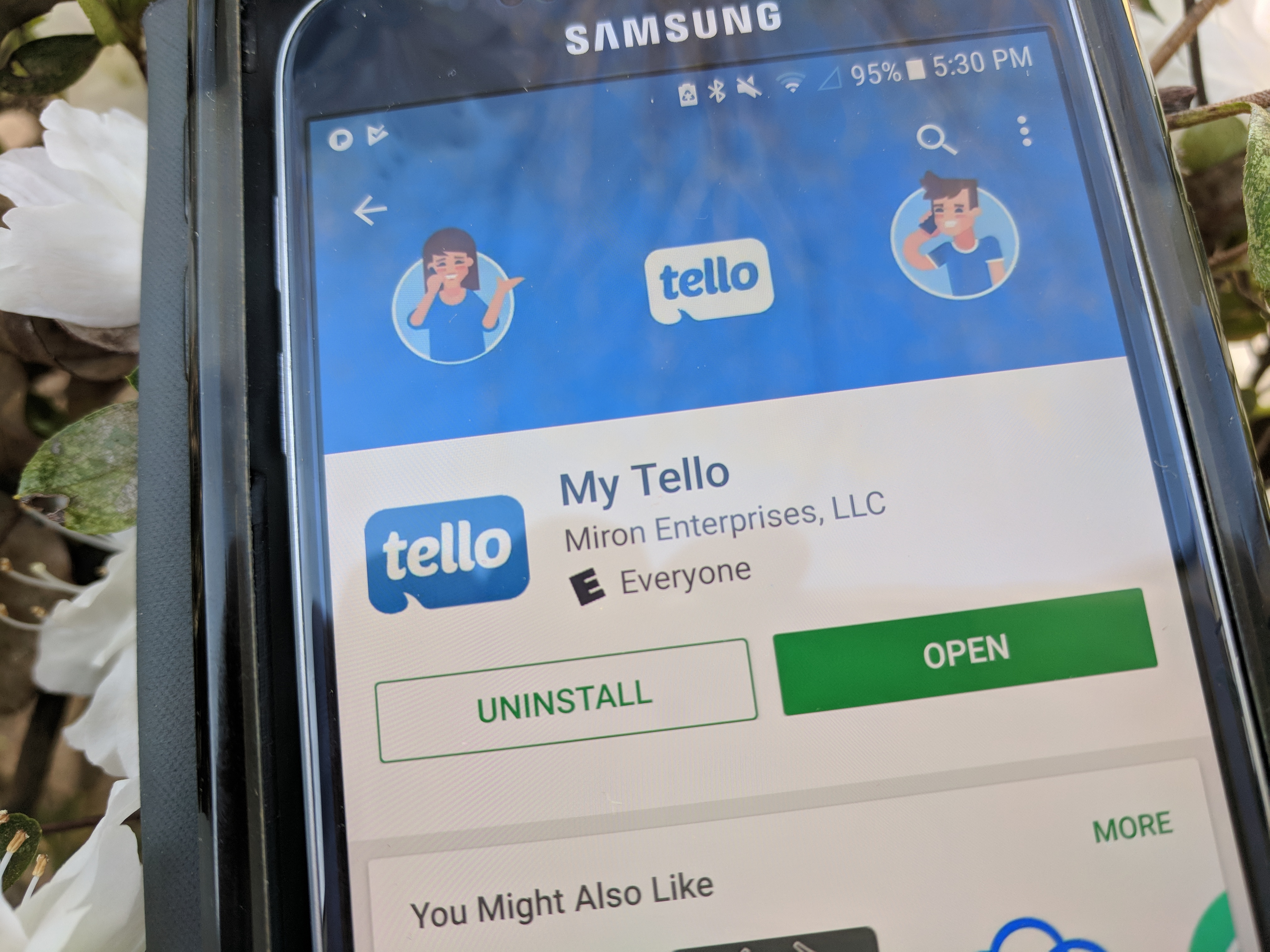 Unfortunately, Tello does not provide Wi-Fi texting. The good news, however, is that you can use apps such as WhatsApp, Telegram, and Google Duo or Google Hangouts. The lack of Wi-Fi texting may not be a deal breaker, but it does complicate an otherwise worry-free experience.

My Tello can also help with data usage as well as miscellaneous questions you may have. Contact Tello within the My Tello app for chat support.

Tello performs as you would expect Sprint’s network to perform. In many places, Sprint’s network remains on the old slow network, while it has updated some cities to LTE Plus. The new LTE Plus technology far outperforms the old LTE network, but it is only accessible to a few so far.

I performed Tello network testing in three local cities and found the Galaxy S6 with Tello performed well in call quality and texts. Calls were nearly instantaneous, and texts were fast to process messages, even in non-LTE Plus cities. Wi-Fi calls did have some occasional static and echo, but calls in LTE Plus areas were crystal clear. In one instance, a Wi-Fi call dropped without warning.

Non-LTE Plus cities saw as low as 0.44Mbps download speeds and as high as 19-25Mbps. Upload speeds were between 0.01 and 2Mbps, with some registering as high as 4Mbps in LTE Plus cities. Of course, the throttled 2G data remaining after your LTE allowance is even slower.

Other factors impact data speeds, but Sprint’s LTE Plus technology is faster than its original LTE network. Unsurprisingly, Tello follows. 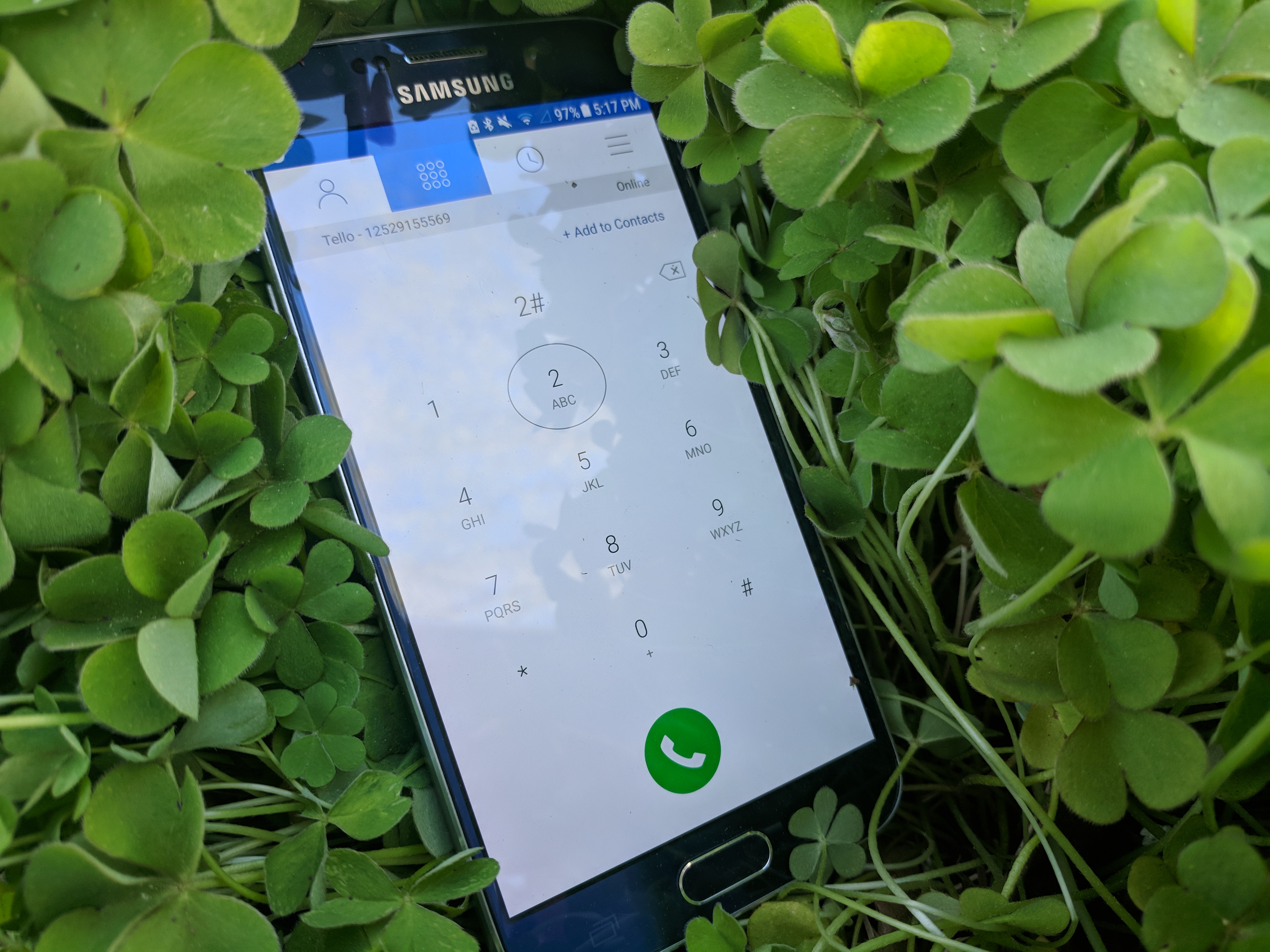 As one can see above, MVNOs often have price advantages over their parent companies. They allow you to activate and drop plans as you go, or pay as you go based on how much or little data (or minutes) you use. MVNOs don’t tie customers down to expensive unlimited options, or force customers to pay for texting when they only want data. MVNOs tend to have pricing and flexibility as their main advantages.

And yet, there are disadvantages. Among them, you must purchase a phone at full price or bring your own phone. Google’s Project Fi is an exception in this case, but there’s a credit check. A family of four might find it quite expensive if they purchased four Galaxy S9s outright.

If you select an online-only MVNO such as Tello, you can’t visit a retail store with phone problems, repair needs, or monthly payments. You can return your phone for repairs, fixes, and a full replacement if the need arises, though, but unfortunately, you’ll have to wait some days to receive it back. Monthly payment drafts could exclude customers who prefer to pay by check or cash only.

MVNOs can either support the extended coverage area of their parent carrier or not. While Tello does not support Sprint’s extended network, Sprint MVNOs like FreedomPop and Ting do.

One other disadvantage that Google’s Project Fi exploits is single-network or single-carrier access. Tello, like typical MVNOs, offers one-network access. Fi grants access to three, making it one of the most competitive network MVNOs in existence.

MVNOs have their good and bad, and it pays to check a number of factors before you proceed.

Is Tello right for you? 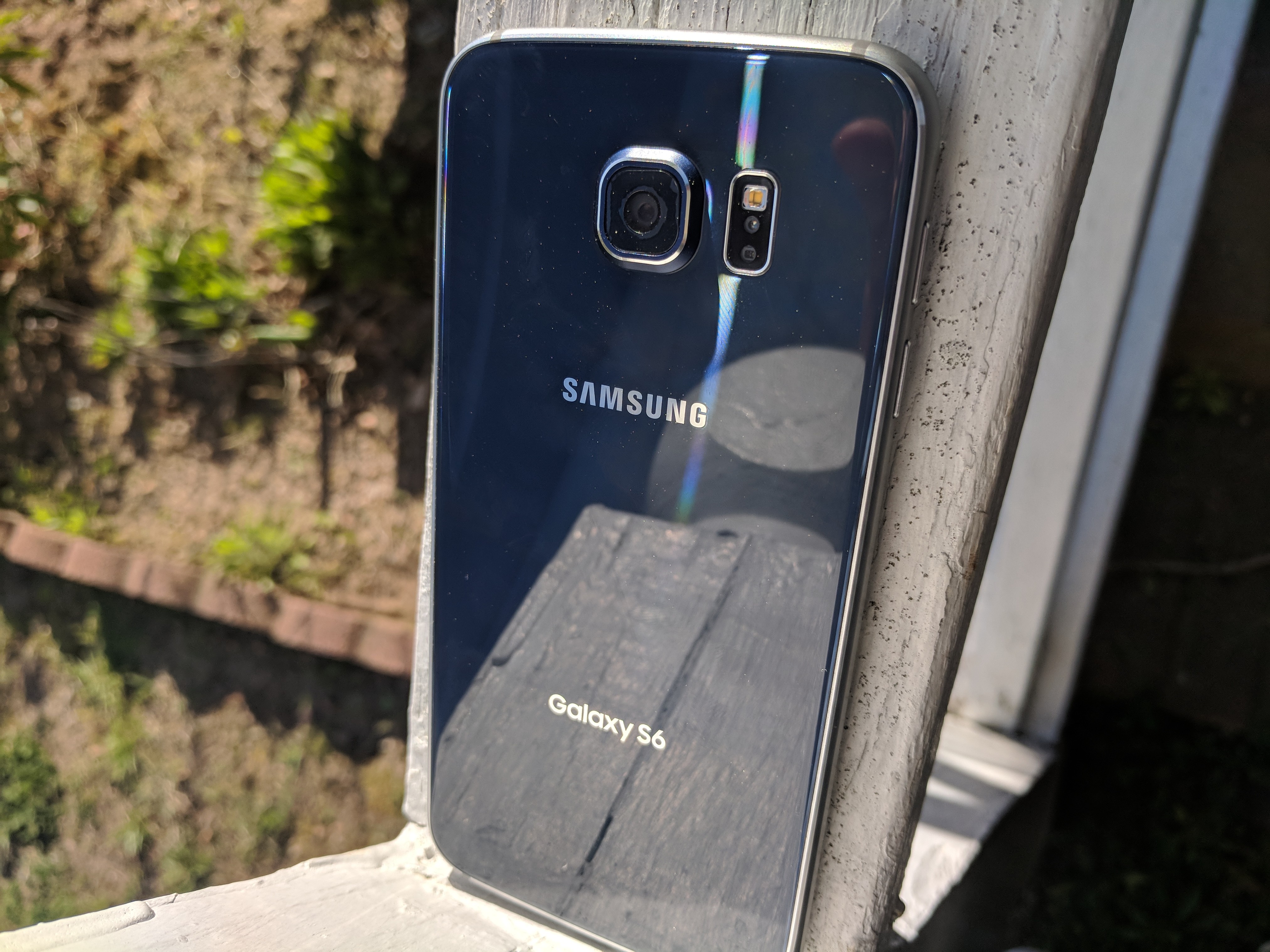 Is Tello right for you? Based on what you want in your first or next MVNO, it’s a definite yes. Want flexibility in your package selection? The most affordable pricing ever seen in a carrier? Okay with an online-only experience? To keep your old phone? If you want all of the above, Tello is for you.

However, if you want more LTE data, Wi-Fi texting, extended coverage on Sprint’s network, or better phone selection, other MVNOs may prove superior.

Choosing an MVNO, like choosing a pair of glasses or shoes, is all about knowing what you need and want. Check out our MVNO Buyer’s Guide for even greater clarity.