Each year we see bigger, better and faster phones. Unfortunately, we have not seen many advances or breakthroughs in smartphone batteries, and as such manufacturers have had to make all the components more efficient in power usage. The piece of hardware that uses the most power is the phone display, followed by the central processing unit, or CPU. It’s nice to have 8 cores of 2.5gHz isn’t is? But when it comes to battery life, it’s almost certain to be bad, and that’s where big.LITTLE comes in.

big.LITTLE is basically a type of CPU configuration. Instead of having all the cores on at the same speed, some of the cores will be constrained to a lower speed, and the rest will be full-speed. These slower cores will be used for light usage on your phone, such as when you’re browsing your Instagram or sending your significant other a Whatsapp message. This is intended to save battery by a considerable amount, and certainly does a fine job of it.

But then you open Modern Combat. Now your speedier cores come to life, firing away and sucking battery up like there’s no tomorrow. The smaller cores become mostly inactive while the big boys take care of the job. This is the intended purpose of them: To only be used when necessary.

So, think of it like you have two processors: One is the LITTLE one, which is used for light usage; and the big one is for heavy usage: 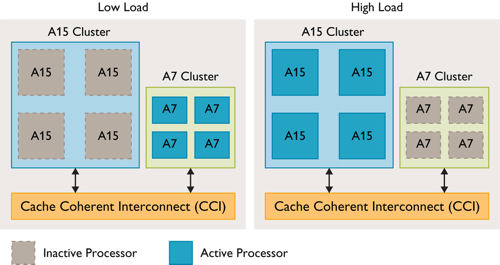 This configuration first came around in late 2011 by ARM, producer of CPUs. Although it has been around for almost 4 years already (Which is a very long time in the technology world), it’s still effectively applied in todays phones. Qualcomm and most major chip manufacturers have implemented it, and if you aren’t running on a budget phone, it’s likely to be in your Android.

Google might be working on its own chips, recent hire indicates