Among the greatest achievements in the Android community, the XPOSED framework is almost certainly one of the most popular subjects. It’s likely you’ve heard of it before, some more than others. It’s also likely you’re not that well clued up on it. Worry not, for this post is here to set the parameters and explain what’s what.

In a nutshell, the XPOSED Framework is an app that you use to mod your rooted phone. Think of it like Minecraft or GTA, where you can download additional things to add or adjust program features. XPOSED offers these “mods” to adjust the software on your phone. Such adjustments include

Custom ROMs like CynanogenMOD can also offer additional features and tweaks. However, XPOSED uses your existing software and adds to what is already there, instead of replacing your software entirely.

Before we move on, let me give you a heads up on what a custom ROM is. Let’s say you own a Samsung with Samsung’s infamous Touchwiz. You don’t like the software that it came with it, so you download software from the internet to replace it. This software is known as a custom ROM.

Moving on, the two biggest mobile OS competitors are iOS and Android. Think of iOS as alternate software (our custom ROM). You are running Android, except that you also want a few fancy features from iOS. Before XPOSED, you would have to have to choose either Android or the custom ROM, and be unable to mix them into each other. XPOSED will allow you to take features from this custom ROM and put them inside Android without having to choose another software type entirely, allowing you to have only what you want.

Keep in mind that iOS actually has nothing to do with XPOSED.

The actual XPOSED Framework is something that modifies the internal system, allowing these ‘mods’ to be injected into the operating system.

What are the pro’s and con’s?

As you’re fiddling around with root and the internal workings of Android, there obviously are some cons. In rare cases (as I’ve personally experienced), installing a package from the repository may be incompatible with your phone model. Most of the time, nothing will happen, but I installed a tweak that modifies the booting up process, inevitably causing a bootloop (when I switch my phone on, all it did was repeat the start up animation infinitely). This was an easy fix for me, fortunately.

Your phone may slow down if it isn’t well endowed with specs and you use lots of tweaks.

It is highly implausible that you will brick your phone by all means.

On a more positive note, there are sufficiently more good things that come around, and even more that you may not expect. For example, say you’ve installed Greenify. Greenify allows you to save battery by cutting down on background activity. By using XPOSED, you’ve already managed to save a considerable amount of battery. And that is only one mod.

What are some examples of mods? What can I use it for?

Depending on your device, you may have access to a wide range of packages. There are 2 main types: visual tweaks and internal tweaks. Most of the visual tweaks are designed for stock Android, e.g. Nexus models and Google Play Editions, while some will work for all models.

Because the G3 is a relatively popular device, there is more support for it. Likewise, here’s a tweaked Sony quick settings tile layout on the Z2: 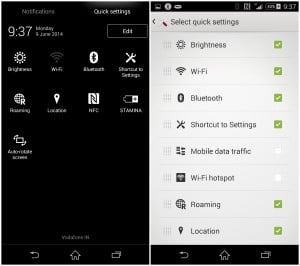 Internal tweaks, on the other hand, are also often device-specific, but they often offer more universal device support. A classic example of an internal tweak is SNAPPREFS. Used for Snapchat, this extension allows you to perform actions not typically supported by the app. You can take screenshots of received pictures without the other person knowing, and even automatically save them if you’re too lazy to press buttons.

Another example is RootCloak. This hides the fact that you have root if other apps check and they are blacklisted by you. Security sensitive applications like banking apps often block users with root, and RootCloak simply tells the app that you aren’t rooted, allowing you to use them normally.

While we’re at it, here’s a glimpse of the module library:

It becomes evident that XPOSED is a very powerful tool for even the average user.

Interested in how to install it? Head over to the official XPOSED Framework XDA thread if you are feeling adventuresome, or if you’re uneasy, keep tuned to AG for our next XPOSED post: How to install the framework and manage modules.

We at AndroidGuys.com accept no responsibility for any devices damaged in the process of using the XPOSED Framework.

Here’s how to turn your computer into a Chromebook