Verizon Wireless is the largest wireless carrier in the United States, serving approximately 120 million subscribers. You’ve surely seen more than your share of advertising and promotion for the brand, but how much do you truly know about Verizon?

Did you know, for instance, that it provides prepaid service? It sure does. It also license its network to other companies for usage as Mobile Virtual Network Operators.

Here, we’ll help spell out some of the details worth knowing as it pertains to Verizon. Read on for information about the carrier’s rate plans, features, 5G, and phones.

Gone for the most part are plans with set amounts of data. Verizon now offers a number of “Unlimited” options, each of which includes unlimited talk and text and access to 4G LTE and 5G nationwide network. 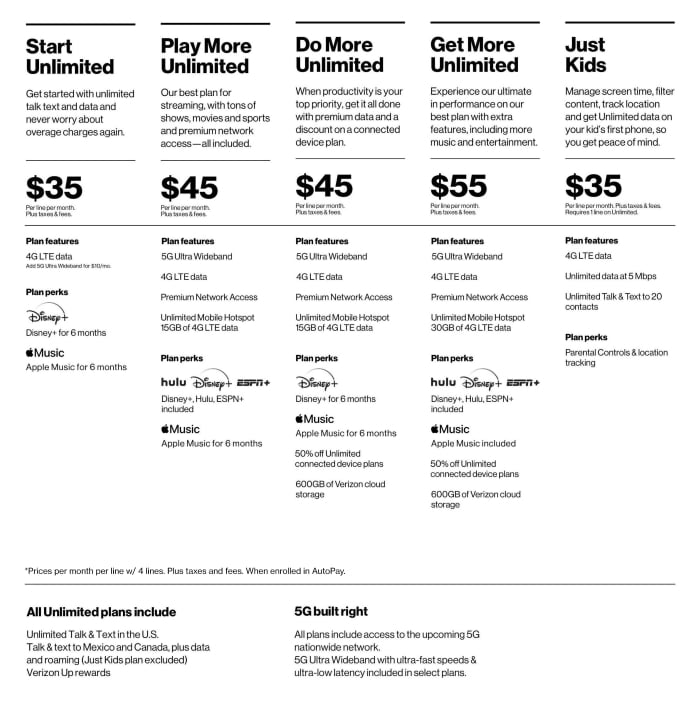 Verizon describes each of its plans in the following way:

Select plans include access to the Ultra Wideband 5G network which is much faster and features ultra-low latency. Verizon also offers extra features on its different plans, including Disney+, Apple Music, and cloud storage. As of today a single line costs at least $70 per month.

Customers with multiple lines can mix and match the various options, giving each user their own specific features. The more lines you have on an account, the cheaper each one is per month.

Verizon offers a few options for customers who need coverage for their smartwatch, tablet, hotspot, or laptop. These device plans start as low as $10 per month for wearables and go as high as $30 per month for laptops, hotspots, and tablets. 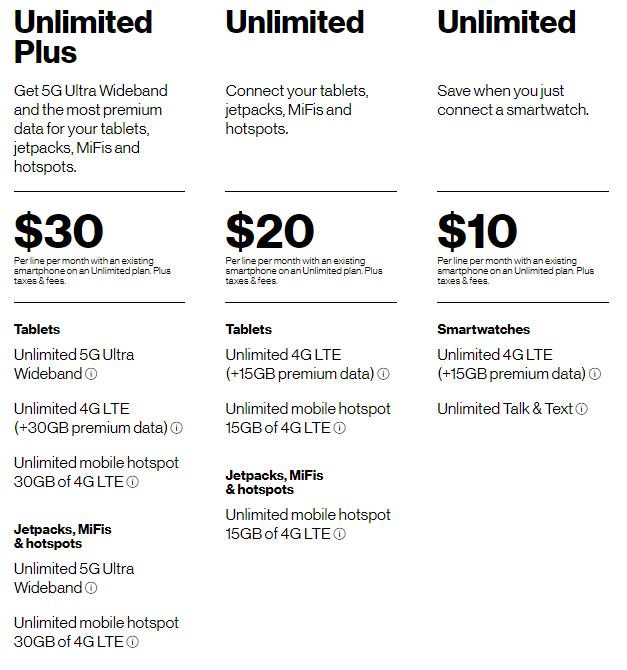 Verizon rate plans are not just about minutes, messages, and data. Indeed, customers can save money on other services just by signing up for Verizon. Here are some of the extras available on plans; features vary by plan.

Verizon’s 5G network is steadily making its way across the country, hitting major markets, stadiums, and arenas. Its “5G Ultra Wideband” is an incredibly fast network with lighting quick downloads and uploads and very low latency.

Unfortunately its signal does not travel as far as other carriers and their network. It can also be impacted by buildings and obstacles and often relies on line of sight with a cell. The reason that Verizon’s network differs is because of the mmWave-based technology used.

In the future Verizon will turn to a technology called dynamic spectrum sharing (DSS) that lets it share spectrum between 4G and 5G.

Verizon has a rapidly growing list of phones designed to support its 5G network. Some of the devices are exclusive to Verizon, including the Motorola Edge Plus.

Models which are available through other carriers are sometimes more expensive through Verizon. This is because of the hardware maker having to include support for the mmWave bands. Examples include the LG Velvet and OnePlus 8 which are about $100 more than at other service providers.

Verizon has one of the widest selections of smartphones with models from entry-level devices aimed at first-time users all the way up to flagships. It also has a couple of phones that fold or have unique designs. Examples here include the Motorola Razr and LG Wing.

It’s also possible to bring your own device to Verizon, provided it is a CDMA phone or universally unlocked device.

Check out our guide on which are the best phones at Verizon.