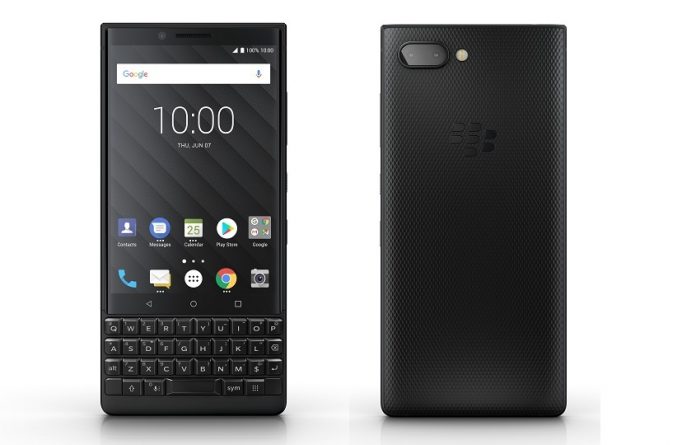 The new device, which is said to be the most advanced BlackBerry smartphone to date, mixes together iconic BlackBerry features with new experiences.

The KEY2 builds on the previous KEYone’s design, but brings subtle refines in order to offer a more premium look and feel.

Commencing at the front, the glass panel now extends all the way to the very top of the smartphone. The large metal bezel that was present on last year’s model has been removed and BlackBerry calls this “continuous frame design”.

There’s also a new diamond pattern on the back, instead of the soft touch rear of the previous KEYone, which contributes to the overall premium feel of the new device. Most importantly, BlackBerry has updated the design of its iconic keyboard, which sits below the 4.5-inch display.

The company says that key height on the KEY2 has been increased with 20% in order to make typing more comfortable and accurate. The biggest difference is the inclusion of a new key consisting of nine dots spread out in three rows. BlackBerry has named it the Speed Key and its purpose is to enable shortcut access to a number of functions.

BlackBerry notes the phone also takes advantage of an enhanced Convenience Key, which makes it easier to access most-used apps with custom profiles for at home, in the car or on the go.

What’s on the inside

For those who were hoping BlackBerry was going to release a true flagship this year, you’re probably going to be disappointed. Unfortunately, the phone relies on a Snapdragon 660, a mid-range octa-core processor clocked at 2.2 GHz and not on a Snapdragon 845. On the bright side of things, you’ll get 6GB of RAM and 64GB of storage (expandable up to 256GB).

Things are more exciting in the camera department. The KEY2 is the first BlackBerry phone to offer dual 12-megapixel cameras on the back with improved image stabilization. There’s also Portrait Mode and Optical Superzoom Mode.

Like all BlackBerry smartphones before it, the KEY2 includes loads of security and privacy features. It comes preinstalled with DTEK by BlackBerry, an app that provides you with a dashboard look at your device’s security. The service can monitor apps and allows you control how they interact with the device and tracks apps over time alerting you in case they access your location, camera and more.

Another feature, Locker has been greatly improved on the KEY2 giving you better control of your content. It offers features like private folders so that your data doesn’t get uploaded into the cloud. Firefox Focus by Mozilla, a private web browser is also included by default.

Last but not least, the new BlackBerry KEY2 arrives with Android 8.1 Oreo out of the box and offers integrated Google Lens and Google Assistant functionality.

For those interested, BlackBerry says the phone will go on sale later this month for $649. You’ll be able to pick it up in full Black or with Silver accents.

If you’re in New York and curious about the new phone, BlackBerry will let you test it in their pop-up showroom. The event will be opened Friday, June 8 until Saturday, June 9 between 10 am and 7 pm.