When I was growing up, my Dad had a pretty nice stereo system with a turntable. This was our only source of music other than the radio. My father had 100’s of albums from The Beatles to John Denver. We didn’t have a TV yet so in order to entertain ourselves we would all dance around in the living room to “Hey, hey, we’re the monkeys” over and over again. My mother was a saint and would DJ the songs for us. It kept us busy. When an opportunity came up to review Electrohome’s Signature Retro HiFi Stereo System I jumped at the opportunity if only for the sake of nostalgia. 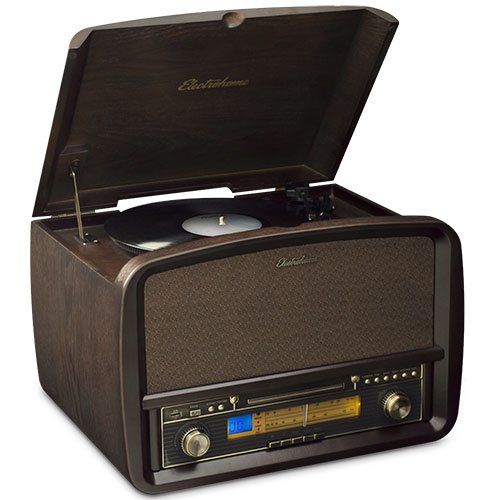 The Electrohome Signature Retro HiFi Stereo System is a cabinet style stereo system. It is definitely meant to invoke feelings of nostalgia for those who are older and hipster-longing for those who are younger.

The record player features a diamond tipped ceramic needle and a fully automatic belt-driven turntable spins 7, 10 and 12-inch records at three speeds of 33, 45, and 78 revolutions per minute.

The whole stereo is encased in a handcrafted real wood cabinet with a dark walnut finish.

Setting up the Electrohome Signature Retro HiFi Stereo System is fairly easy. The hardest part is taking it out of the box. It is packed in pretty tightly.

Realistically, it is pretty much ready to go the minute you take it out of the box. The only thing you have to do, other than plugging it in, is to untighten the screw that secures the turntable during shipping.

I love that the radio features an actual analog dial and station indicator. There is a satisfying feeling of turning the dial to get to your favorite radio station while hearing the other radio stations blip in and out over the sound of static. No digital tuners here.

There is also a stereo indicator light on off to the left of the station indicator that will light up when a stereo radio station is found. I found that I used it as a signal strength indicator. If the light was on, that meant that I had a good signal.

There is also a wire antenna in the back that can help you get better reception.

The CD player works well. There isn’t too much to it. It works exactly like any other CD player would with one exception. If you have a USB thumb drive connected to the Electrohome, you can rip the CD tracks to your thumb drive. I wish I had this when I was ripping my collection of CD’s back in 2002. It would have made it so much easier.

This is the one area where I actually found the sound quality lacking. I’m not referring to snap, crackle, pop noises normally found in on records. I’m talking about the depth of sound. The record player just lacked in the lower bass tones. The higher treble sounds were great. They were crisp and clear, but there was little to no bass. There are better sounding record players for sale at Huppin’s. To be clear, the sound on the radio and CD Player were fine. They had a great well-rounded sound.

The actual record player itself was a joy to use. Unfortunately, I didn’t have any records of my own, so my wife volunteered to go get some from our local Goodwill. She found a Lionel Ritchie record and a United Artists soundtrack record for $2 a piece.

I found that there was something quite satisfying as putting the vinyl record down and allowing the needle to begin playing to record. Again, this inspired feelings of nostalgia. My 12-year-old daughter quickly became obsessed with the new gadget. She had never seen anything like it before. I would wake up on the weekends to her playing the Lionel Ritchie album.

However, the best feature of the record player is that you can record the record to a USB thumb drive. Unfortunately, it will not create separate audio files for each song. You would have to stop and start the recording between every song, or use an audio file splitter to create separate files. It will also continue recording after the record has stopped, so you need to pay attention or you’ll have a long pause after the last song.

The USB port works quite well, but the interface is oversimplified. There is no way to tell what folder you are in or what song you are playing, but you are able to play music. To me, the main purpose of the USB port is to record your music. Unfortunately, it will only record music from CD’s and records. It will not record radio stations or sounds from the auxiliary input.

The auxiliary input works, as well as you, might expect. Just plug in an audio source with a 3.5mm audio jack and you can listen to music from your phone or whatever you like. I ended up using a Bluetooth adapter to stream my music wirelessly to the Electrohome.

The interface has both digital and analog elements to it. The analog interface is pretty awesome. There are switches for the audio source which have a satisfying click when pressed. The power button also has that satisfying click. The tuner and volume knobs also have a satisfying feel to them. The one knock on the analog buttons controlling the audio source is that they don’t line up together completely and the unselected source buttons feel just a little loose when they are not selected.

One thing I wish that they would have included is the ability to change the bass and treble levels.

The digital interface leaves a little to be desired. The display is an LCD number display that doesn’t show much other than the track that you’re listening to when using the CD player. The buttons that control the CD player and USB player are are labeled, but they are small and hard to read in low light situations. I felt that I needed a flashlight when operating it in  those low light conditions.

Overall I really liked the Electrohome Signature Retro HiFi Stereo System. It’s not perfect by any means, but it takes me back to a time where your stereo was more than just a stereo. It was also a piece of furniture. I think that the Electrohome would find itself at home in any environment. For me it’s more than just a stereo, it’s a time machine and a conversation piece. It’s available on Amazon for just under $200 with free shipping.