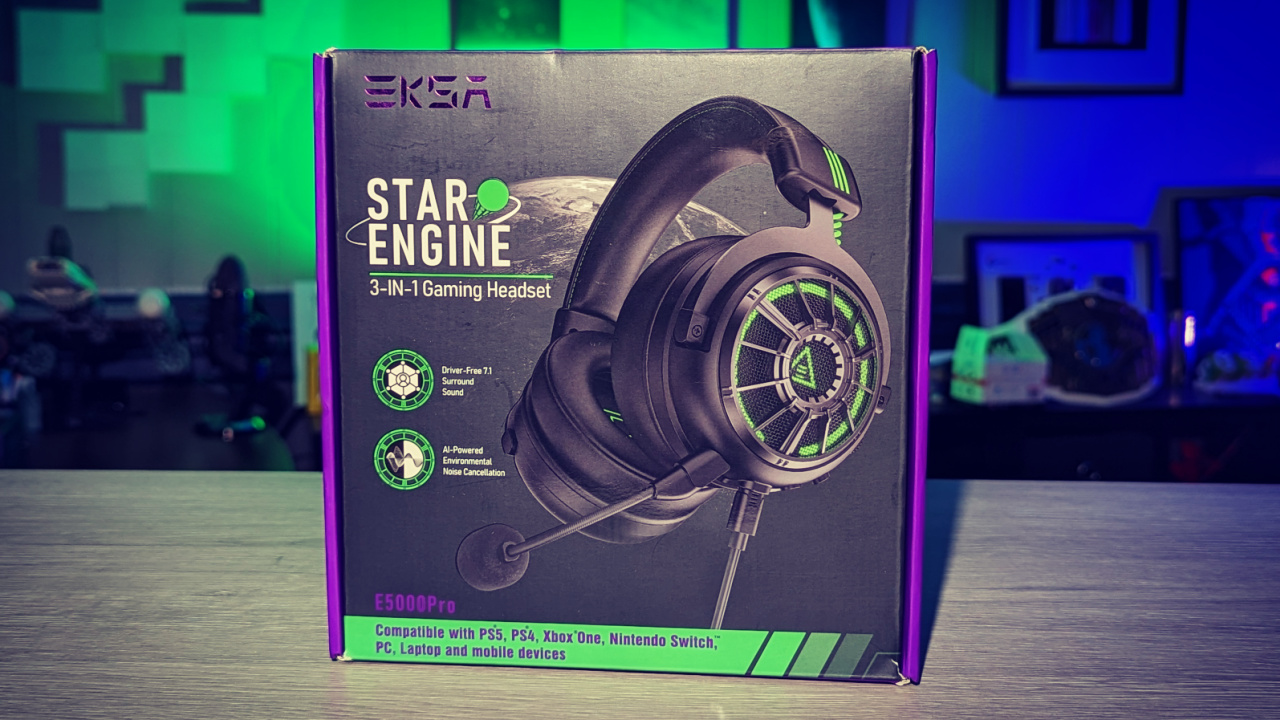 The EKSA StarEngine E5000 Pro Gaming headphones, $70, offer gamers a fairly robust set of features for their price. Not long ago we might have paid twice as much for less capable cans.

Arriving in a purple and grey box, the Star Engine E5000 have a modern design with bright green accents. They ear cups are large and soft and made to be worn for hours on end. The memory foam is very comfortable as is the headband’s cushion.

The headphones are interesting to look at and match the aesthetics that one might expect from a current gaming setup. Between the grilles, the neon green lines and wires, and optional LED light effect, they look pretty fierce.

The headset comes with a silky bag with a drawstring, a detachable microphone, and three cables for connection. Indeed, you can plug these in via a 3.5mm headphone jack, USB Type-C, and USB Type-A. This means they’ll work with PlayStation, Xbox, Nintendo Switch, PC, and mobile devices alike.

The left ear cup is where you’ll find buttons for muting the mic, toggling the light effect, and switching between stereo and 7.1 surround sound. It’s also where the dial is for adjusting volume. They’re easy to locate without looking at them, but you might need a few wears before you’re comfortable doing so.

I found the EKSA Star Engine E5000 to be a tad heavier than expected but that did not hinder long-term wearing. The same goes for size as they are a bit larger than I might like to wear for music.

Keeping in mind these are not Bluetooth headphones with Active Noise Cancellation (ANC), I cannot imagine wearing these outside of a rec room or office. Not that this is a knock, though, as they are made for sitting down to play games.

The headset does include a pair of microphones, one for calls and one for identifying noise. Using AI, it can discern the difference between human voice and other ambient sounds. This Environmental Noise Cancellation [ENC] technology reportedly suppresses up to 99.8% of environmental noise.

As for the sound, I was pleasantly surprised by the overall quality in both settings. The 7.1 surround sound works very well in gaming. Given sound design is so important for a lot of games today, I appreciate being able to hear enemies sneak up on me. The little whirs and bells that get lost when sitting across a room from a TV are front and center with Star Engine E5000 Pro.

If you play games on a Windows-based PC, you’ll appreciate the desktop application which features different equalizer settings and more control over the sound.

Switching over to music, the Star Engine E5000 Pro tends to favor highs with bass sometimes lacking the punch you might get from more traditional headphones. That said, they feel clear and crisp but not “tinny”. Play around with the desktop app a bit and you may lock on to something you like quite a bit.

The Star Engine E5000 is priced for mass appeal and thanks to its features, it’s built that way, too. Despite their weight and size, I find them to be very comfortable even for longer sessions.

While sound quality is good for music, it’s not superb. But switching to 7.1 surround and gaming, and their main raison d’etre, they fare much better.

I appreciate that EKSA tosses three cables in the box for flexibility between consoles and computers. It’s a small gesture, sure, but it further helps justify the $70 price.

You can learn more about the Star Engine E5000 Pro at EKSA’s website where they’re available to purchase. Alternatively, you can also find them at Amazon for the same price.