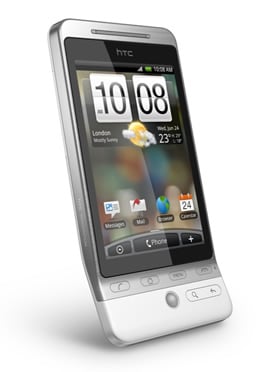 HTC just announced their next Android-based handset in London a few moments ago. Called ‘Hero’, it doesn’t use your run-of-the-mill Android OS. Like they do with Touch Flo on Windows Mobile, HTC has sprinkled their own flavor on it.

Although the device is not listed on HTC.com yet, we’ve managed to get our hands on the specs. So far, what we can tell you is that the hardware is similar to the G1 and Magic.Â  Oh, it has a 3.5mm headphone jack in case anyone was interested… And something called Flash too.

The ‘Rosie’ interface we were all expecting has been renamed “Sense” and boy does it look good!Â  Users are able to choose from a slew of customized widgets on your Android home screen.Â  We’re also hearing that SenseÂ  features the ability to toggle between user profiles and switch between different preset widgets that vary based on what you want to see.Â  For example you might not want Twitter and Facebook sitting so prominently on your phone when at work.

The Hero is the first phone to have Teflon on it.Â  You read that right – Teflon.Â  Not sure how that will feel in the hand, but we imagine it cuts down on finger prints and smudges.

More on this phone as we can get our hands on it! 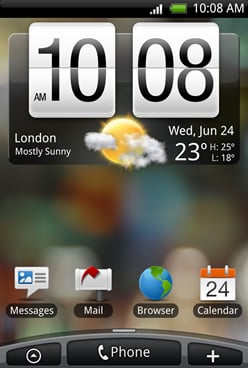