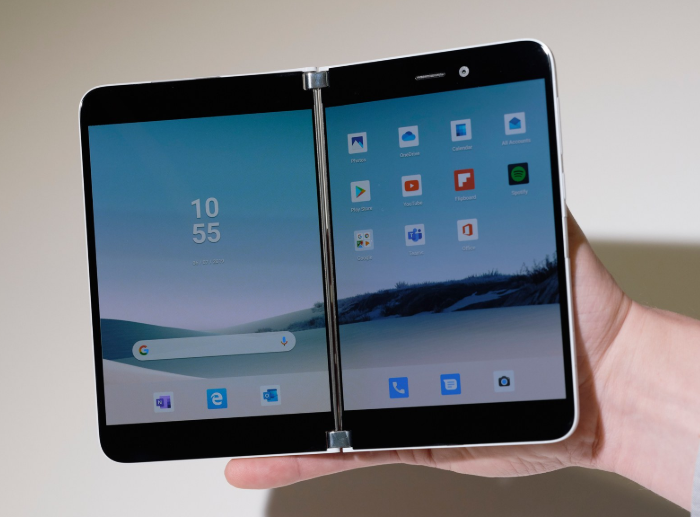 Microsoft, at a Surface-related event today, had a little something special to show off as it wrapped up its show. It’s called the Surface Duo and it runs Android. And it makes phone calls. Oh, and it folds, too.

Don’t look for the Surface Duo to hit the market anytime soon as Microsoft says it’s not due until “holiday 2020”.  Why show it off so early? The device maker hopes to attract developer interest so they can begin working on apps.

Save for a few details, there’s little known about the Surface Duo. According to Wired, the device is powered by a Qualcomm Snapdragon 855 processor and features a pair of 5.6-inch displays that rotate 360 degrees. Unfolded, they combine for an 8.3-inch tablet-like experience.

As one might expect, each screen is capable of running its own apps. Or, flip is on its side and one display can be used as a keyboard or game controller.

Although the Surface Duo runs Android, it appears to have a modified user interface that makes it resemble Windows. Wired indicates that a test model being used by Microsoft chief product officer Panos Panay runs Android 9.

For reasons that remain to be seen, Microsoft doesn’t seem to be all that keen in referring to the Surface Duo as a phone. While it does make and receive phone calls, the company looks to refer to it as a Surface device.

With around one year to go before we see the Surface Duo, there’s a lot to learn about Microsoft’s endeavor. Details like hardware specifications, key features, and, especially, price are a long way off.