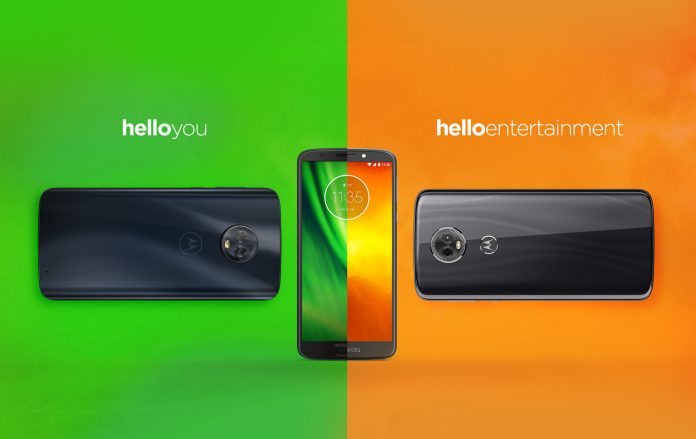 Earlier this morning, Motorola took to the stage to announced its two new product line families. These are the Moto G6, G6 Plus, and G6 Play; and the Moto E5 Play and E5 Plus. From their previous generations, the phones now incorporate 18:9 displays, huge batteries, curved backing, and cheaper price tags.

With the Moto G6 line, you have the higher-end G6 along the more budget G6 Play. Unfortunately, the G6 Plus won’t be arriving in the US. The G6 has a 5.7” Full HD 18:9 LCD display with a 12MP and 5MP dual-lens camera. The phone also comes with up to 4GB RAM and 64GB storage, a 3000mAh battery, and the Snapdragon 450 octa-core processor.

The G6 Play has nearly the same type of display as of its big brother, but at 720p resolution instead. The other specs are in similar line with the slight decrease in quality for the standard G6. You’ve got 32GB of storage and 3GB of RAM, a single 13MP camera, and a Snapdragon 427 quad-core processor. The G6 Play does have a 4000mAh though, which Motorola states will grant “up to 36 hours of power.”

Both devices feature Turbopower to get hours of use time after only short minutes of charging. They both also feature curved glass, Gorilla Glass 3, on the back, similar to what the Moto X4 had. The Moto G6 will start at $249 while the G6 Play starts at $199, and will be available this Spring.

Dropping down to the E5 line, they are even more budget-friendly than the G6 line. While the G6 devices are similar to each other, the E5 Play and E5 Plus have little parity. The E5 Plus has a 6” HD+ (720) display paired with a 12MP camera. It will also come with 3GB RAM, 32GB storage, and a Snapdragon 435 processor. A massive 5000mAh battery will power all of this.

The E5 Play has 5.2” HD display with an 8MP rear shooter. The phone will only have 2GB RAM, 16GB storage, and either a Snapdragon 425 or 427. Shockingly, the E5 Play has a removable 2800mAh battery — haven’t seen these in a while. The Play is easily the lowest end of these new Moto devices, and that should reflect in its price.

The E5 Plus will come in Grey and Blue, while the E5 Play will come in black. Unfortunately, no pricing has been released just yet, likely because carriers will be selling these phones. They will be available alongside the Moto G6 line starting this spring.

What does everyone think about this new Moto lineup? The new Moto G6 devices should again hold the crown for best budget devices (under $400) this year. The Moto E5 line will be good gifts for those just getting into the cell phone era, young and old.