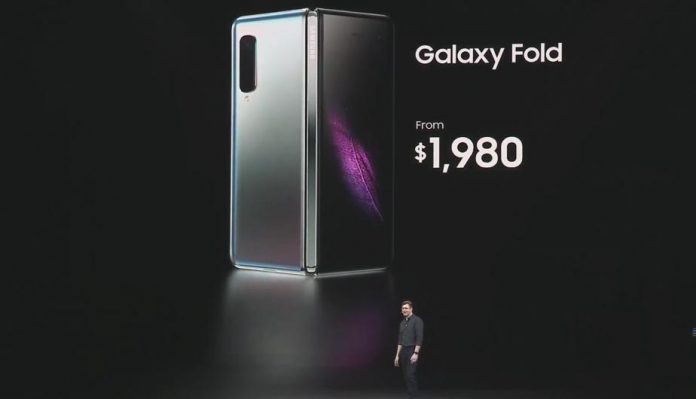 That’s a lot of money, but to be fair the Samsung Galaxy Fold packs in a lot of tech. For starters, it has a 7.3-inch Infinity Flex Display when unfolded. The Galaxy Fold essentially puts a tablet display in your hands. It is worth noting the screen is a 4.2:3 ratio similar to an iPad and also has a sizable notch in the upper right corner for the two front-facing cameras.

When in its folded orientation there is a separate outer screen measuring 4.6-inches at an ultra-wide 21:9 ratio. Making it taller and skinnier than Samsung’s current S series or Note models. At only 4.6-inches it is rather small compared to the 6 plus inches most users have become accustomed to these days, but should make it easier to use one-handed due to its considerable thickness.

The Galaxy Fold is powered by an unnamed 7nm processor which will most likely be the Snapdragon 855 for the US models and possibly an Exynos variant for other regions. Samsung made sure to load it up with RAM and storage with a whopping 12GB of memory and 512GB of storage space.

Out of the box, the Samsung Galaxy Fold will run Android 9.0 Pie with some extra features to take advantage of the form factor and screen size. For example, with Multi-Active Window the Galaxy Fold is going to put all that RAM and large screen to work with the ability to run up to three apps at once.

Samsung worked closely with Android on the Multi-Active Window to ensure running three apps at once and swapping them would be as seamless as possible. Now, you’ll have the freedom to watch YouTube videos, surf the web, and have a chat all at once on the same screen.

The Samsung Galaxy Fold also includes App Continuity allowing you to open an app with it folded and having it seamlessly appear on the unfolded screen. This easy transition allows you to start working on the smaller screen and continue on the larger screen instantly.

It also features the regular Samsung goodies such as DeX, Samsung Pay, and Bixby.

There is a shocking six cameras included on the Samsung Galaxy Fold. Starting with a triple camera setup on the back with a 16MP f/2.2 ultra-wide camera, 12MP f/1.5 and f/2.4 dual aperture dual pixel camera with OIS, and a 12MP f/2.4 2X telephoto camera with OIS.

When folded there is a single front-facing 10MP f/2.2 selfie camera. While in the unfolded state you have a dual camera selfie setup featuring a 10MP f/2.2 + 8MP f/1.9 RGB depth-sensing camera. No matter how you look at it, that’s a whole lot of cameras and makes sure you’ll be able to take photos no matter what state the Galaxy Fold is being used in.

When you’re talking about a phone with so many screens and such a large display, you know the battery is going to be important. Samsung has found a way to include two batteries with one on either side to balance out weight and feel of the Galaxy Fold. These two batteries act together as one and add up to a 4380mAh of overall capacity.

With such a large battery you’ll be thankful that the Galaxy Fold makes use of Quick Charge 2.0 and Wireless Fast Charging technology. It is also compatible with Samsung’s Wireless PowerShare technology allowing you to charge up other devices wirelessly. 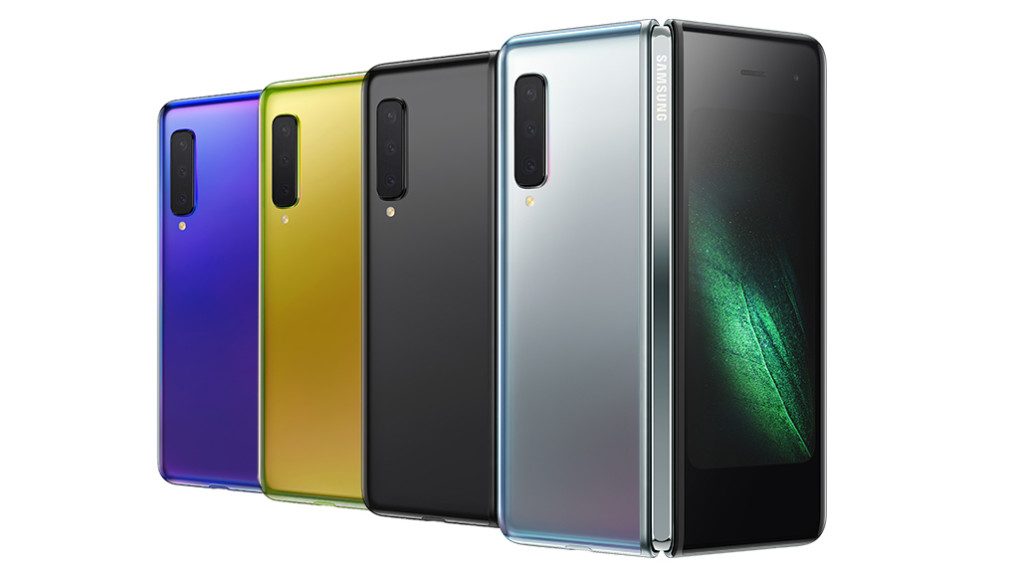 The Samsung Galaxy Fold will be available in the US starting in the second quarter of 2019 from AT&T and T-Mobile. It will set you back $1,980 dollars and come in Astro Blue, Cosmos Black, and Space Silver.