If you’ve been paying attention to smartphones over the last couple of years, then you certainly understand that these things are getting bigger all the time. 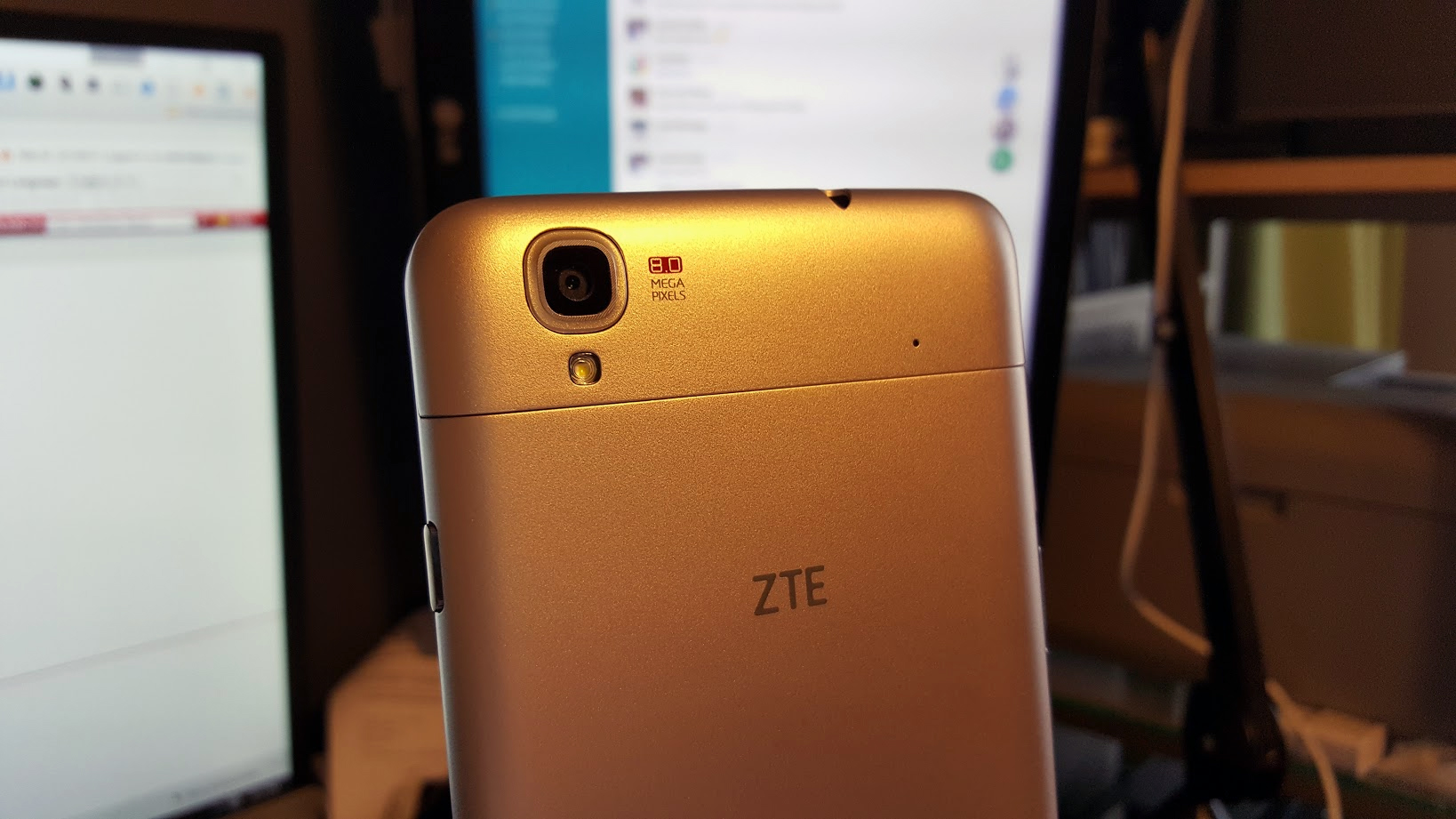 Whereas a few years ago a 4-inch or 4.5-inch handset would be considered unwieldy or too big for the average person, today’s smartphones range from 5-inches to nearly 6-inches. To help keep phones from getting too big (out of hand) we have seen some manufacturers trim the bezel around the display. This works in most cases and provides a good single-hand experience.

The Samsung Galaxy Note series is the first name in plus-size screens, but the space is getting increasingly crowded.  And, for a lot of us, we don’t need a stylus for jotting down notes or marking up photos. Other big-screen models of the day include the Nexus 6 and the LG G Stylo. ZTE is another brand that has been putting out larger display smartphones for some time as well. We’ve spent some time playing with of them, the Boost Max+, and are here to offer up our takeaway.

Running Android 5.1 Lollipop, the Boost Max+ is a 5.7-inch smartphone. You will find that there is quite a sick bezel around the display which leads to a somewhat bulky in-hand experience. Upon taking out of the box we were immediately reminded of how the Galaxy Note and the Galaxy Note 2 felt prior to Samsung slimming things down. 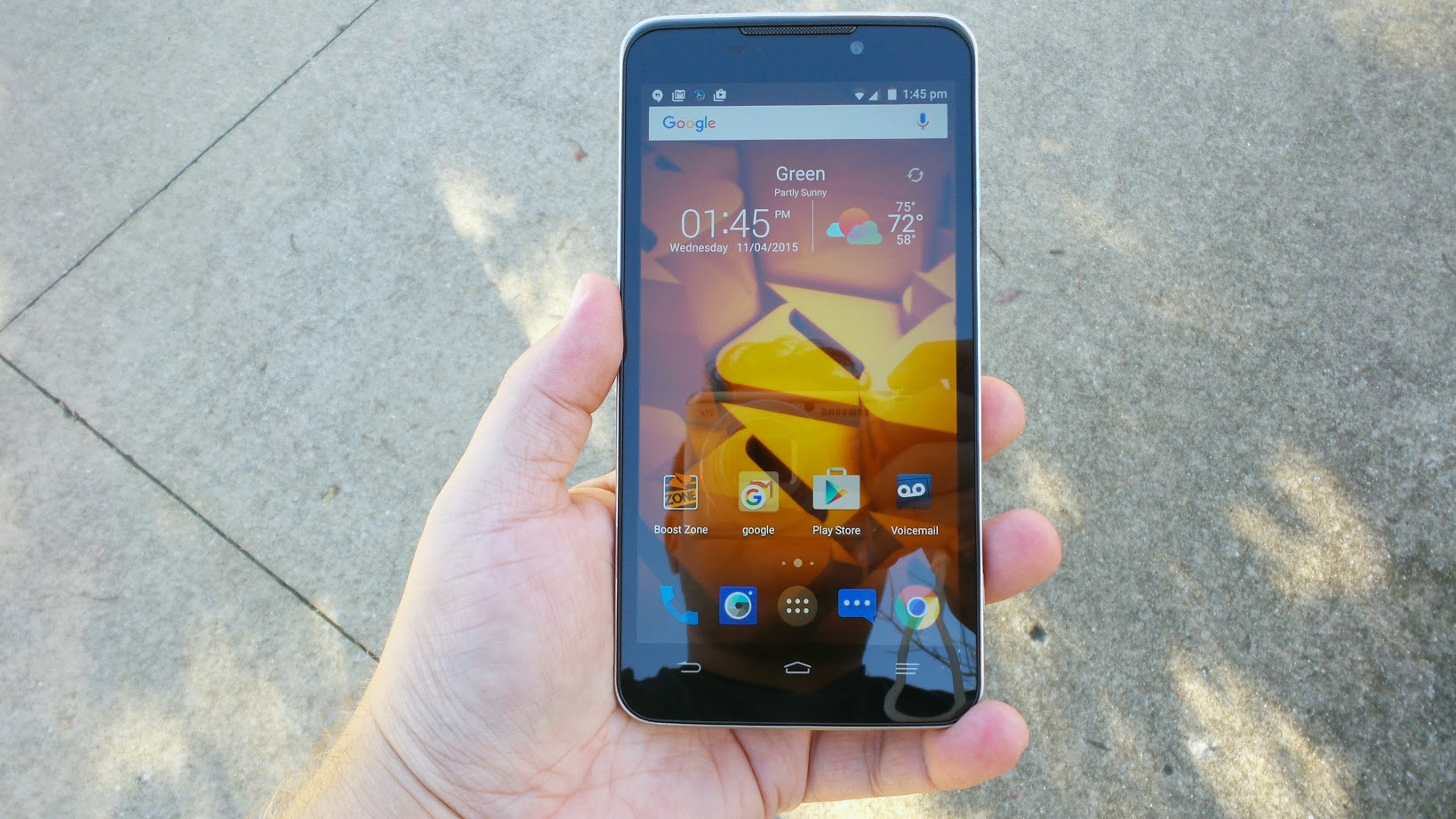 Looking at the device from the front we have a speaker at the top center which rests just above the front facing camera. There are capacitive buttons at the bottom so you will not find any hard keys. To the right of the face is the power button which sits about three quarters of the way up. Roughly an inch up from the bottom is a physical camera button. 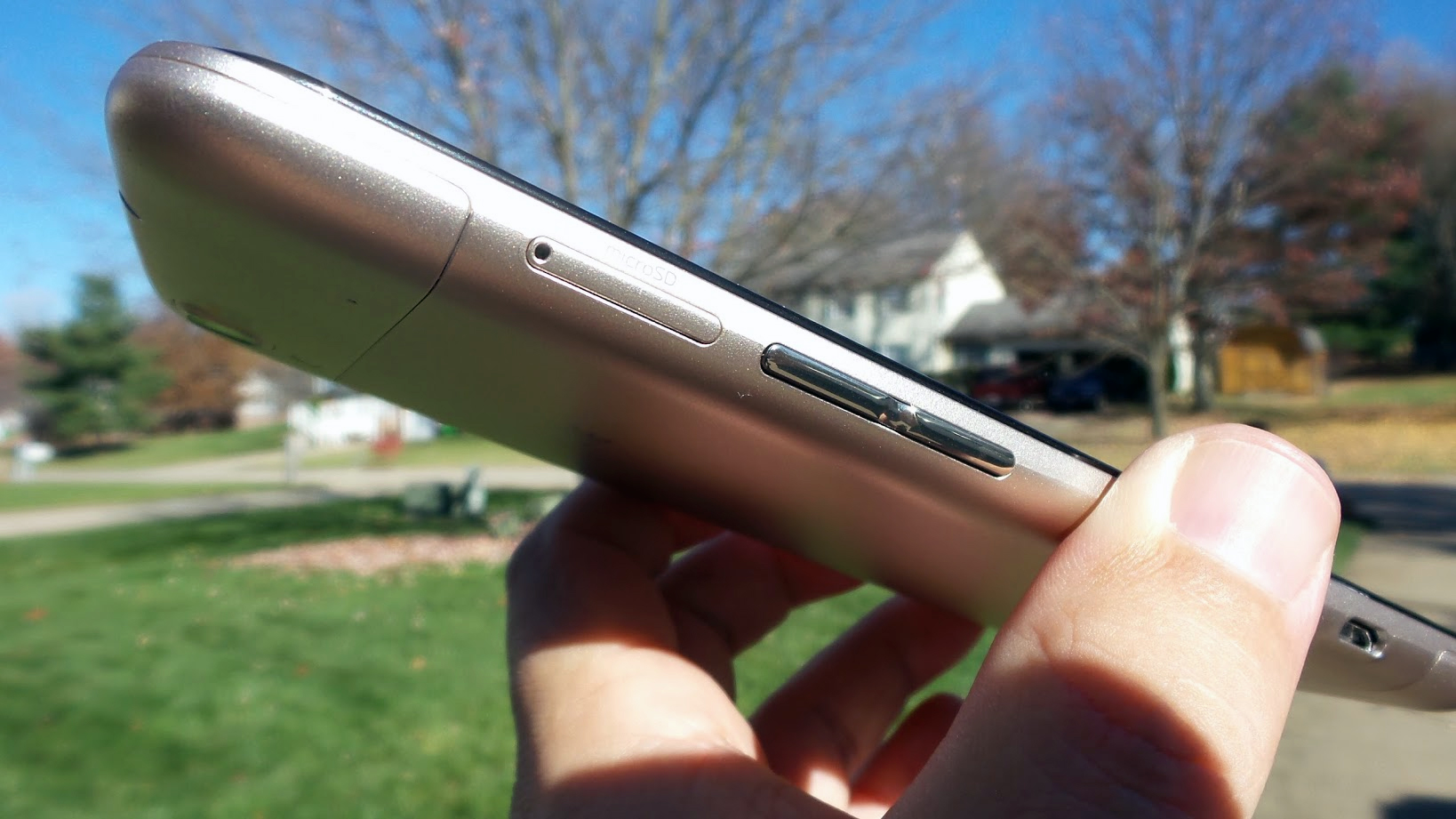 On the opposite side of the phone you will find the microSD card slot for expansion. The internal memory is 16 gigabytes so you could  certainly run the risk of filling up if you download a lot of music or apps. Below the microSD slot are your volume rocker buttons; further down is the microUSB port. Indeed, you plug this one in on the side as opposed to on the bottom like most phones. The 3.5mm headphone jack can be found at the top of the phone.

Flipping the device over we find the 8-megapixel camera in the top left with a flash. It is possible to remove the plastic, upper panel which protects the camera. It is here where you will find the IMEI and serial number as well as access to the SIM card slot. There are no other removable aspects to this phone. The 3400mAh battery is non-removable.

Performance is what we expected with the 1.2 gigahertz quad-core processor bolstered by 2GB RAM. It’s middle of the road stuff and gets the job done for the average consumer. If you are looking to play games, do some serious multitasking, or push your phone a little bit, you may be disappointed with the overall performance.

Things don’t necessarily lag, however we never got the sense that this one had any “snap” to it. Basic stuff like email, texting, and web browsing went just fine for us. As we got into more graphic intense or demanding apps we found it slowed a bit. Hopping from one app to another or going back to the home screen was just on this side of speedy, but the more apps we had open, the more we noticed performance dwindle.

The screen resolution is listed at 720 pixels which is technically considered high definition. By contrast, many of today’s larger handsets dabble in the 1080p or 2k resolution. This means double or quadruple the number of pixels spread out over the same screen. In other words, a sharper picture.

The lower resolution screen, of course, leads to a lower price point. However, at this size, it becomes pretty obvious that it won’t look as sharp as some of the pricier and bigger name counterparts. Is it good enough for the average person? You bet. And, consider that shortcomings are only obvious when you measure one model against something else. On its own, we like the display, but we certainly do not love it. 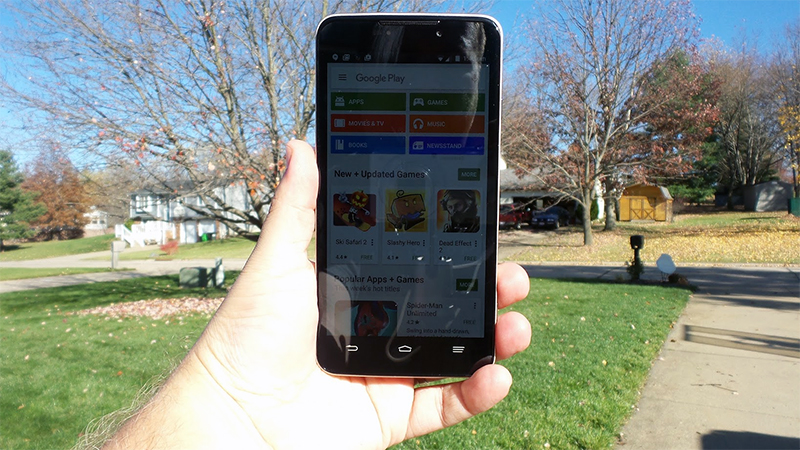 The display itself is moderately bright, if only in standard lighting conditions. Get outside, however, and you will find that it is little more difficult to see – naturally. We found we didn’t have to strain our eyes or look closely at the phone to read emails and text. Pictures and graphics looked good, and we were pleased with the overall experience. Direct sun wasn’t fun, but using our body for shade or holding our hand over the screen went a long way.

The camera setup is adequate but it’s not anything to write home about. The rear camera is 8 megapixels which is lower than what you’ll find in some of the other mid and upper smartphones. The front-facing camera is 1-megapixel which is just enough to satisfy selfie takers and provides the most basic quality for video chat. Our sample pictures showed a grainy picture, sometimes in average lighting conditions.

Going outside where it was bright, mid-day images would often have a “blown out” white. Viewing these on a phone isn’t so bad, but look at the original images on a PC and you’ll see where the camera falls short.

As for the camera software, well, that’s more impressive. There are a number of shooting modes to choose from including Auto, Pro, and Fun. Dig into fun a little and you’ll discover Macro, HDR, Smile, and some filter effects. 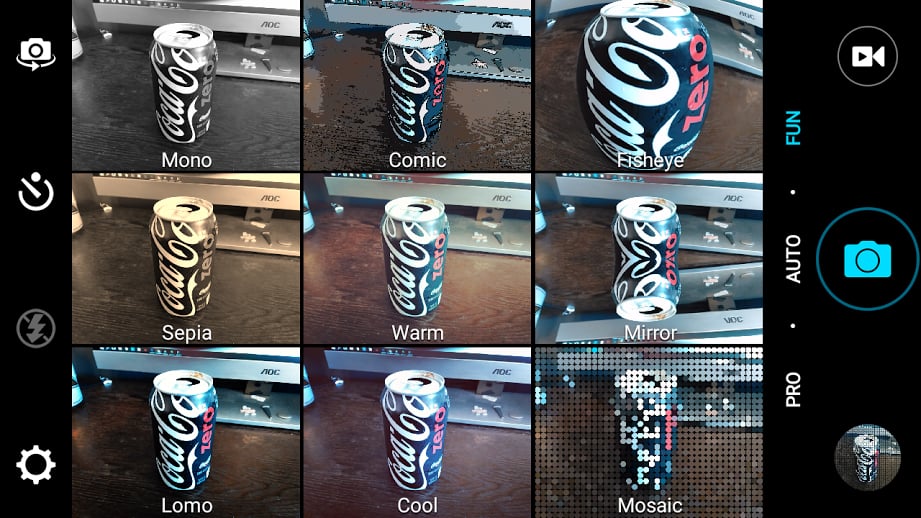 Although the filters don’t slow the picture taking process down, HDR takes about three seconds to process a photo. And, even at the higher dynamic range, we still ended up with images that had too much white. Keep that in mind if you’re planning on action shots.

The phone features Dolby Digital Plus for audio which is designed to enhance your movies and video playback with a virtual surround sound. The speaker itself is found on the back of the phone so  it broadcasts away from the user. Depending on how you hold it, sound can get louder but it’s never “too” loud – even at max volume.

Compared to other phones we felt this one came in around 3/4 as loud. Along those lines, placing the Boost Max+ on a table give the sound some amplification as it bounces off the surface. We would have liked to have something that played out of the side, front, or bottom of the phone. A screen this big begs for media consumption like YouTube or Netflix; we want sound to go with it.

The 3400mAh battery is a bright spot for the Boost Max+. We were consistently able to get into a second and, sometimes, even third day of use. After initial setup and playing around we found that this phone lasts far beyond one day of usage. Your mileage may vary, of course, but we suspect the target demographic will not tax this device to heavily. When you’re not playing high end games and only pushing a 720p screen, that capacity of battery is bound to do well.

The software experience is nearly stock with Android 5.1 Lollipop. ZTE and Boost Mobile do not do much to enhance the user experience in terms of customization. You will, however, find a number of pre-loaded applications for services such as Boost Music, Boost Wallet, Boost Zone, Uber, and a few others. On the plus side, you can uninstall a number of these applications and get them out of the way. If you are not married to the services or features, you can remove them to free up small amounts of storage space.

We found there were a few instances that the phone notified us of other apps or services to check out, something that doesn’t come with the standard Android build. Between the pre-loaded apps, widgets, and services it does feel like Boost is pushing a carrier agenda or fulfilling licensing agreements. It’s not necessarily worse than any of the other major carriers, but it’s not exactly fun to wake your phone up to seemingly random recommendations.

The phone feels a little bulky however it is not actually all that thick. A lot of it comes down to the bezel around the display and the extra space above and below the screen. If you’re not happy holding or using a 4.5-inch or 5-inch phone, this one might feel unwieldy.

We found the HD display, which is protected by Gorilla Glass, does take a pretty good beating. Toss it in the pocket or purse, or sliding onto the desk, the phone handles basic life carelessness quite well. 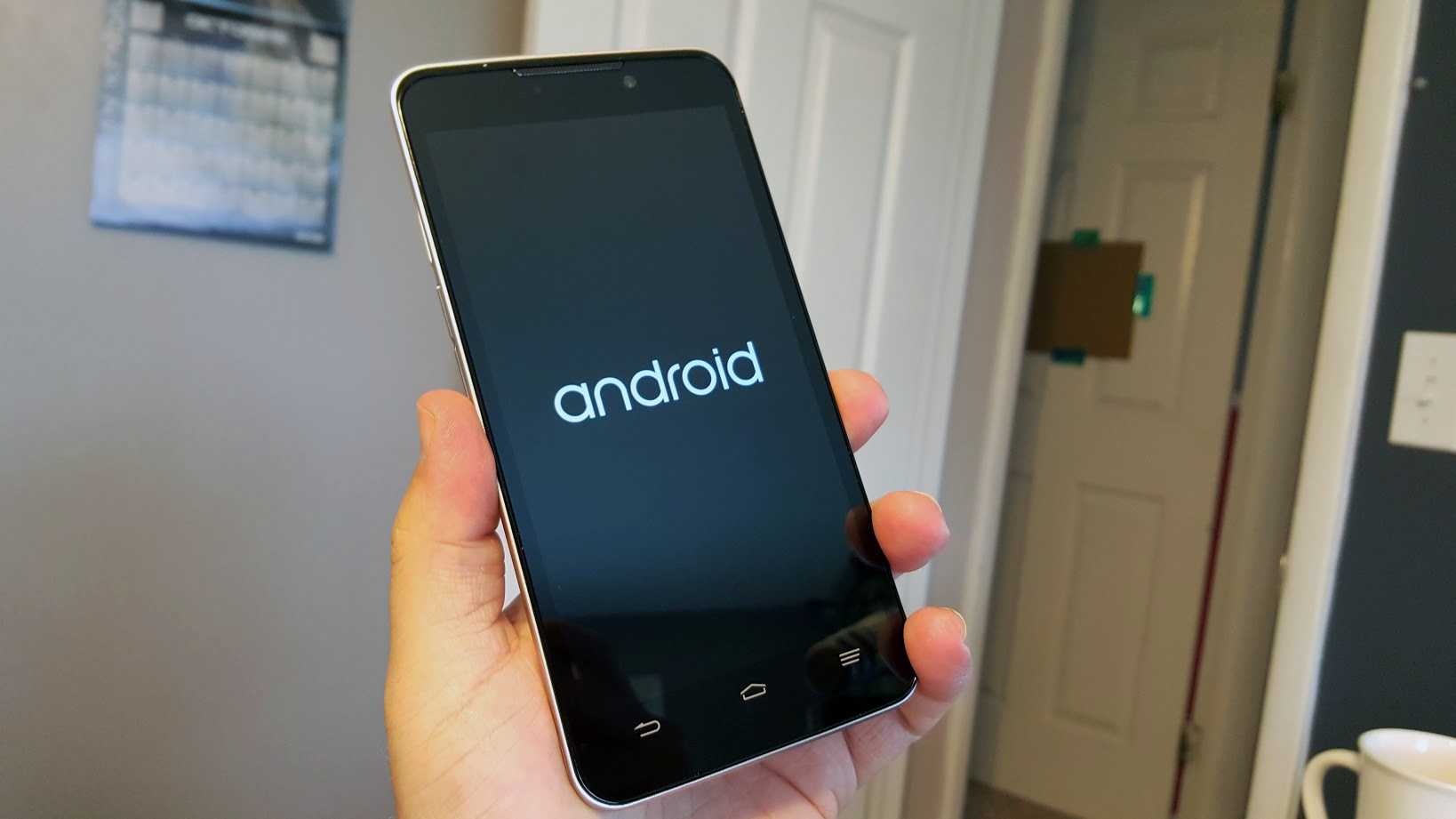 Considering the $200 off-contract price, it’s hard to complain about the handset without sounding overly picky. The Android 5.1 is respectable even though there’s newer stuff to be had. Given that 6.0 Marshmallow is not a must-have update, most Boost Max+ users should be happy.

While this one certainly isn’t as glamorous or look as “premium” as other brands, it is hard to fault this device. It does not pretend to be anything that it isn’t and the price point is in line with performance. There are a number of phones from Boost Mobile that command a much higher price, some of them more than a few years old.

Prepaid phones tend to get a bad reputation when it comes to smartphones. The idea, generally, is that these are yesterday’s devices and cannot compete with the models found that other carriers. Is that the case here? Somewhat. If this is your first foray into Android smartphones and/or with Boost Mobile, we suspect you’ll be happy with the Boost Max+. For those who have previous experience with an Android handset, this one may feel like a side-step.